I'm sure that, once upon a time, my vagina was "peachy." Probably before I had kids -- you know, that time when all my insides suddenly came out.

I remember it vividly. I'd just had my first baby and, like a lot of women, the labour hadn't quite gone to plan. What I mean by that is, after the first twelve hours of labour, I got my birth plan and rammed it down my husband's throat. After 24 hours, I had consumed all the drugs the hospital could offer and was in an epidurally induced haze of Hello Magazine and jelly tots. I had lost all feeling pretty much everywhere. I couldn't even remember my own name.

So when it was time to push, I hadn't got a bleedin' clue what I was doing. I was making the right noises -- I think. Sort of mooing. And I was holding my breath so my face went red. And I tried and tried and tried to shift the sodding alien that appeared to be stuck in me, by imagining -- as we all probably did -- that we were having the most enormous, melon-shaped poo.

It appeared that I may have pushed a little too hard. Because when Tween had slithered his way out, quite a lot of my vagina kept him company. I was too high to care, too impressed by my own powers of drug-induced pushing to notice that part of me had exploded. Nurses came and looked and tutted, and there were mutterings, and suddenly a needle, and then AN AWFUL LOT OF PAIN (which, quite frankly, I'd had enough of for one day).

And then, thankfully, sleep.

The next day, A MAN came to look at the battleground of my netherparts, and told me in a matter-of-fact tone of voice that my stitches had all come out.

"What have you been doing?" he asked, sternly.

"Never mind. It will heal naturally." And then, an afterthought: "Given time."

At that point in my life, I really didn't care. My baby was in special care (had he been smothered by my moving vagina? Perhaps we'll never know). I was glad that he was alive. To be honest, I wasn't really thinking too much about my lady parts.

Time passed, and I was aware that -- although healing ok -- my vagina didn't have the same...form... as before. My labia or "beef curtains" (as one boyfriend fondly called them) drooped so far between my legs that they could have really done with their own bra to hold them in. Tucking them up worked for a while but, inevitably, after a few hundred yards of walking, they would fall out and start swinging like a cats cradle.

One day I made the mistake of putting a mirror between my legs and having a good root about. It was shocking. My nethers were unrecognizable, and seemed to have morphed into chopped liver (with added gristle).

This is roughly what a normal vagina looks like: 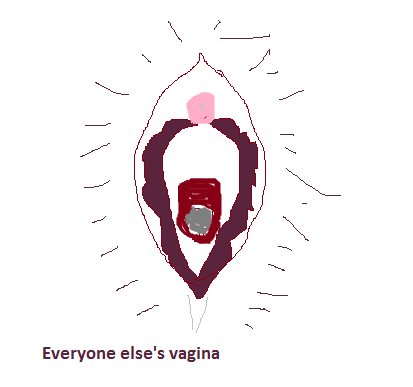 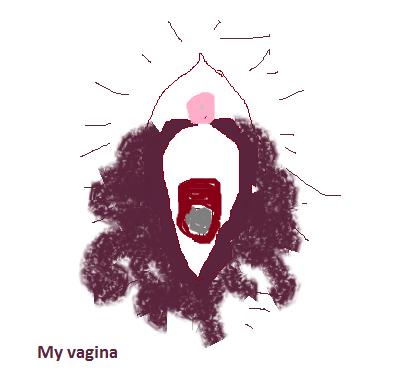 I have never examined my vagina again.

When I was married, it was ok to have a shattered front bottom. My husband understood what had happened -- he'd been there, for God's sake -- and so he could never, ever, EVER express any form of disgust. Which he no doubt felt, but was forced to cover it up unless he was happy never to have sex ever again.

But now I'm single, what do I do? When I'm about to go to bed with a bloke, do I say, "Umm...bit embarrassing this...but do you like chopped liver?" Do I turn out the lights and hope he doesn't notice? Or do I celebrate it and dangle my curtains in his face?

I don't know. So for now, at least, I'll keep on tucking in the hanging bits and hoping for the best.

Postscript: By the way, if you are properly concerned about the way your labia look, Women's Health Victoria have this wonderful website which will no doubt set your mind at rest: http://www.labialibrary.org.au/