We raised our twin daughters on Pete Seeger, Woody Guthrie, Ella Jenkins, Tom Paxton, and assorted other folk singers who recorded children's albums. They enjoyed them as toddlers and adolescents, but by 12 they had left them behind in favor of Taylor Swift and Lady Gaga.

Now they are 17. As the father of teenage girls, I have spent many hours driving them places while they listen to their favorite songs and singers on the car radio. Most of this music (like Bruno Mars, Imagine Dragons, Jay-Z, Adele, and Pink) strikes me as simplistic or silly -- no doubt just like my parents felt about my favorite songs and singers in the 1960s. Even so, I have discovered that I actually like a few of my daughters' favorite singers, like Mumford & Sons, Ed Sheeran, Civil Wars, and the remarkable (though still little-known) Hudson Taylor. But when I try to sing along, or just move around to the beat, the girls give me that look that means: "Daddy, don't try to be cool. You're too old." So I figured that I'd never bond with my daughters over music. 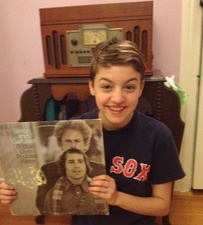 But something happened a few months ago that may have turned the tables -- literally. I was cleaning out the shelves in our living room cabinet. That is where my wife and I store our record collection, comprised mostly of 33 rpm vinyl albums from the 60s and 70s. We brought them with us when we moved to Los Angeles over 20 years ago. We hadn't listened to even one of them in all that time, but it was hard to part with them, since, like old letters and high school sports trophies, they connect us to our past.

When we drove from Boston to LA, we depended on tape cassettes, which had replaced vinyl albums, to keep us entertained. Within a few years, though, we'd moved on to the CD stage of history. And just recently, we've become familiar with the strange new world of I-tunes, which allow music-lovers to create their own highly individualized albums instead of buying the pre-packaged versions.

I rarely thought about our collection of more than 200 LPs, but when I did, I assumed that they had become warped and unplayable, and would eventually be thrown in the trash to be recycled into some polluting plastic product. But a few months ago, our daughter Amelia started to look at our LPs and then started asking questions about them, including "will these still work?"

I told her that the vinyl records had probably warped. And even if they were in mint condition, I pointed out, we didn't own a "record player" -- a phrase I hadn't used in years and which, to Amelia, probably sounded like "typewriter." But she was curious enough to pick out some albums that caught her fancy and bring them to the house of a friend whose parents did own one of those old-fashioned music-playing machines.

She was hooked, and asked us if we could get her a record player. We did, and for the past few months she's been spending lots of time in her room -- by herself and with her friends -- listening to Simon & Garfunkel, the Beatles, Joni Mitchell, Peter, Paul & Mary, Bob Dylan, and even Procol Harum, whose "Whiter Shade of Pale" album cover is one of the most psychedelic ever produced. (I remember the covers of most of my albums as well as I remember the music).

At some point I may ask her to listen to some of my more obscure (but much-loved) albums -- like the McGarrigle Sisters, Nina Simone, Fairport Convention, Laura Nyro, Tim Hardin, Odetta, the Roches, and Richie Havens. But right now I'm enjoying listening to my old favorites and enjoying even more watching Amelia enjoy them.

It is strange to realize that most of these albums are 45 or 50 years old, purchased when I was in high school and college. To Amelia, these are ancient artifacts of an earlier civilization. But they constitute great music and I'm happy to see her appreciating them and asking questions about the artists and their songs, including my own memories. So I've told her about seeing a young Bob Dylan at a Greenwich Village coffee house before he'd released his first album, going to a Peter, Paul and Mary concert in Asbury Park when I was in high school, attending a Simon & Garfunkel concert even before the soundtrack to "The Graduate" made them super-famous, and spending nights in my college dorm room with friends trying to figure out what "I Am A Rock" meant. She's already heard my stories about every Pete Seeger concert I ever went to, including the Newport Folk Festival.

In today's high-tech world, it is comforting to hear Amelia say that she likes hearing the scratchy quality of the songs on vinyl records, which she considers a marker of authenticity. And Amelia isn't the only teenager who has rediscovered vinyl LPs. She's part of a trend.

Just like video stores, record stores have fallen on hard times. Big chains like Tower and Virgin have gone out of business. But some independent stores have recently gotten a big boost selling both used LPs and re-issued albums. (To appear trendy, even stores like Urban Outfitters sell vinyl records).

Rusty Gordon, co-owner of Canterbury Records in Pasadena (which was started by his father in 1956 and is now one of Amelia's favorite hang-outs) told me that there's always been a demand for vinyl LPs among jazz and rock aficionados, but he noticed a big jump in vinyl sales about five years ago and an "extra surge" in the past six months. Five years ago, vinyl records accounted for about 5 percent of his store's sales. Today, new and used vinyl LPs constitute more than 15 percent of Canterbury's sales and the momentum is "still building," Gordon says.

Teenagers, Gordon said, make up a big portion of the new consumer market for vinyl records. They mostly buy re-issued classic rock and folk-rock albums (the Beatles, the Doors, the Rolling Stones, Bob Dylan, and Simon & Garfunkel) and newly-minted albums by indy rock favorites like The Black Keys, Arctic Monkeys, and Mumford & Sons. One of the most popular vinyl re-issues among teenager consumers is the Beatles' "Abbey Road" album. (Amelia, however, has the original album, thanks to her dad).

What explains vinyl's new-found popularity among today's teenagers? "They think it sounds better," Gordon told me. "Plus, it's about as far as you can get from MP3s. They like the artwork on the covers, too."

Amelia's bonding with my old vinyl albums may be a passing fancy or the beginning of a life-long love affair with this music. And, of course, she hasn't abandoned her contemporary favorites, whom she still listens to on the radio and I-tunes, and whose concerts and other gigs she still attends with her teenage friends. But I do get a special chill up my spine when I hear "The Sound of Silence" and "Blowin' in the Wind" coming from her room.

Peter Dreier teaches Politics and chairs the Urban & Environmental Policy Department at Occidental College. His latest book is The 100 Greatest Americans of the 20th Century: A Social Justice Hall of Fame (Nation Books, 2012).