We had reservations about republishing this, originally shared on The Good Men Project, here. Therefore we'd like to say at the outset that there is no prescription here, no recommendation or suggestion about how other people "should" conduct themselves. We do our best to live by the principle of emotional responsibility which states that I am 100 percent responsible for my experience, as you are for yours. The concept of honesty is one part of this, and while it feels risky, it is, as our teachers Duane and Catherine O'Kane write, "far less risky than acting out." We share this story for the people who want to believe that vulnerability, as scary as it feels, is ultimately worth the risk.

I wrote a post about wanting to cheat on my husband, and it went viral. The response was mixed, the opinions passionate. The only voice that was noticeably absent was that of my husband, Nige.

This didn't seem right, but it did feel significant, symbolic of the collective vow of silence that today's men are living under.

While some people expressed their outrage that I would hurt my husband in this way, others shared either publicly or privately that they too have had these kind of thoughts, fantasies and yes, even obsessions. Still others protested that if a man were to speak about being attracted to women whilst in a relationship, he would be lambasted.

This conversation, sparked by my article, appears to be one we are ready to have. The next step was clear. It was time for Nige to speak.

A few weeks ago, when Elloa disclosed her secret attraction, I felt like my stomach had been clamped in a vice. Then, as her confession came, an inward surge of Hulk-like anger, all too familiar. My thoughts were no different than some of the judgmental comments that appeared in reaction to her article on The Huffington Post. Let's face it: the ego always speaks first, and often cruelly.

The difference was, I know enough about this part of my mind not to voice my thoughts at this point. The first thing I have to do in these moments is take a breath, then another one, then another one. If I react now, it's game on for the ego, but game over for the relationship -- and I won't let the ego win, because it viciously guards a set of mistaken beliefs that drive me further and further away from the one thing I truly want the most: love.

Therefore, Elloa and I have a contract about disclosing our secrets and dark thoughts to each other. We both understand that secrets kill relationships, and see so many couples playing a long-term game of hide and seek with each other. In our marriage, we are determined to fully know and be known by the other, and that means having the kind of raw, honest conversation that Elloa's article described. The purpose of this is to go beyond the secret thought to the fear of who we are underneath, the fear that is driving that secret thought, desire or behavior.

Having this depth of honesty in our communication is not easy. It is scary, vulnerable and unpredictable.

Fortunately, we have enough tools in our relationship kitbag to be able to work through any form of upset in a safe and contained way, without using the other person as a dumping ground. The critical element in the whole process is the intention that we both set at the beginning.

We did what we always do in this situation, utilizing a therapeutic process (adapted from Clearmind International) that forms a core part of our relationship. The process gives permission to the reactive, raging part of my mind to unleash its fury for three solid minutes without any kind of reaction whatsoever from Ell. Crucial to the process is that she remains neutral, and that no physical boundaries are crossed whatsoever.

When the other person refuses to fight back but also stays the course and remains in a place of neutrality (not always easy to do), something amazing happens: the brutal, vicious attacking part of our mind gives way and we literally "drop" into our feelings. This is the place no man wants to go -- a pit of despair, self-loathing, shame and loneliness.

My anger, directed initially towards Elloa for her "disgusting" behavior, was really masking a deep wound that I have carried since I was a boy -- the belief that I in fact am completely inadequate and unloveable. 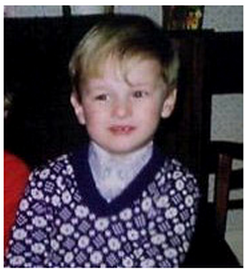 The root of this belief lies in my childhood, during which I lost a testicle after being kicked by another boy and the subsequent taunting, which dogged me for most of my schooldays. I grew up believing I was a freak. I called myself the odd man out.

Fast forward 39 years and there I am with my wife, feeling 6 years old again: raw, exposed and vulnerable, with my head in my hands. I am terrified to look up, afraid she will reject me. In that moment, I feel deeply ashamed of who I am.

I know there is only one way through this shame -- I have to make contact. I have to let her see me, otherwise I'll just be an empty shell. If I don't let her into my world, then I'm doomed to walk this planet as a zombie, a man with a plastic smile that doesn't quite reach his eyes. And yet there is so much I want to say. Somehow, I have to take a risk and open up.

As a man, I haven't been taught by our society how to express my feelings. It's as taboo as wanting to cheat, forbidden in daily life and permissible only in the direst of circumstances. Even then, only a few tears are allowed before the words "man up" come into play.

Even now, after nearly three decades of inner work, speaking about how I feel often feels clumsy and awkward for me. However, experience has taught me not to listen to the shaming voice that tells me that I'm weak if I cry.

So on the day Ell told me about her crush, I let her hold me while my body shook and the tears poured out of me. I told her everything I fear I am and she just listened, just held me and let me let it all out.

Eventually, I came to a quieter place. The dam, once burst, doesn't gush water uncontrollably forever. The wave subsides. I am left with my beliefs.

After the outrage and attack, after the shame and the guilt, after the tears, there is a moment of true choice. This is the state from which I can change my mind, because here, I am open. Here, I am willing to accept help. I ask my wife, this woman who just a few minutes ago I thought was the cause of all my pain, to help me remember who I am.

And the truth comes back to me. I am not the odd man out. I never was. I am strong. I am worth loving. I am good. And nothing can be taken from me because I have everything I need within.

This is not a theoretical or intellectual knowing, it is an experience I inhabit when I work through, rather than dance around or avoid, my deepest fears. The function of my relationship isn't to avoid experiencing pain or the realization of my fears -- it is to give each other a soft place to land when one of us needs to show up, knowing that the healing is always twofold.

Elloa revealing her attraction therefore became a catalyst for me to expose a war wound that I carry on a daily basis and to do the work of changing my perception of myself. I do not do this work alone. I do it from a mindset of making conscious contact with my wife and with myself.

I'm a normal guy; I have thoughts of sexual attraction towards other women almost every day. Some are fleeting while others linger. It's the ones that linger that trouble me the most. But I know that with each attraction there is an opportunity -- often not as dramatic as this one -- to take a step closer to my wife, to myself and to being the type of man I want the world to know exists.

And that is why, in our household, my wife Elloa is always welcome to tell the truth, and why I tell mine in return.

Find out more from Nige Atkinson about breaking the vow of male silence.

Watch and learn Clearmind International's approach to emotional responsibility in From Crisis to Celebration.