Catherine Pearson's blog "My Workday On The Treadmill Desk" is the first in an ongoing series where Huffington Post employees report on their time working from the TreadDesk available in our offices. Look for more to come on our "We Tried It" page.

When I got off the TreadDesk at 5:30 p.m. yesterday -- stuffed with self-importance and indignation at having spent the entire day ON MY FEET -- I was fully prepared to summarize my experience thusly: I hate you, treadmill desk.

But cooler heads prevailed, and my editors suggested taking a night to sleep on things. Which brings me to my next-afternoon take, which is: I still hate you treadmill desk, only slightly less.

But before I kvetch, a bit on my fitness background.

I'm a former jock, turned sloth, and in the five years since college I have been a sporadic exerciser at best. I'll jog, do yoga and for a brief stint, I played in a co-ed soccer league. These days I'm running, trying to get back in shape for what I hope will be my first half marathon this fall. We'll see.

What I do fancy myself is something of a walker, in so far as I have lived in New York City for nine years and the city demands that you get out and use your legs. I appreciate that. It gives me a time to think and take a few deep breaths. Present crabbiness aside, I also think it makes me less cranky.

What walking doesn't make me, it turns out, is a better journalist, for reasons I think could apply to a lot of people who also have desk-centric jobs. Simply put, doing stuff was tough during my trial, which ran from around 11 a.m. to 5:30 p.m. and included a seated lunch break and multiple coffee runs. Among the tasks I struggled with:

1) Trying to type notes, not drop the phone and not fall off the treadmill while interviewing a source for a story.

2) Trying to type notes, not drop the phone and not fall of the treadmill while interviewing a source for a story and having Damon the photographer snap shots of me. (See below.) 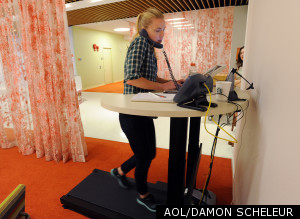 3) Writing notes and outlining stories in my notebook, by hand. Surprisingly, the physical task of writing was the most difficult thing -- even when I slowed down, I wound up walking all wonky and sideways and tripping over myself.

And that was my biggest beef with the treadmill desk -- the logistics of it. I grant that there was a phone headset that would have helped and that I didn't notice until it was too late, but it wasn't just the phone that was the issue. I found it tough to do a lot of things -- drink water, eat food, talk and type -- all while keeping up my pace. Consider it a humbling exercise for someone who's always thought herself a multi-tasker.

Physically, I felt -- and still feel -- pretty good. My hamstrings are a little sore today and in the last hour yesterday, my lower back began to ache. I think that has to do with the fact that I was increasingly schlumped over the bean-shaped desk as the day wore on, using my elbows to prop myself up while I typed. (Come to think of it, my elbows are a little sore too.) But frankly, my back doesn't feel so hot right now and I've been sitting on my duff all day long. And on a more positive note, I fell asleep in, like, six seconds last night and slept like a baby.

Mentally, I felt -- and still feel -- pretty good, too, like I accomplished something extra and with no comfy chair to daze (or doze) off in, I think I was actually more mentally focused throughout the day. But I never did get into that zone where I forgot I was walking. I wasn't aware of every step, but I was fighting the feeling that I just wanted to SIT DOWN.

All told, the TreadDesk reported that I walked 6.76 miles and burned 616 calories -- though 43 minutes in I may or may not have momentarily broken the machine, meaning my first jaunt wasn't accounted for. Also, as fitness editor Sara Gaynes and I discussed; the machine's calorie counts seem a wee bit generous, particularly given my poky 1.5 mph pace.

Am I itching to get on the TreadDesk again? No I am not. I might hop on it for an hour on a day like today where it's now 5:07 p.m. and I feel that strange end-of-day combo of restless, jittery and tired. I mean, maybe. But probably not.

Disclaimer: Best practices for using this machine is 30-60 minutes at a time. For the purposes of these fun stories, we have decided to use them for an entire day, but the recommendation is to work gradually up to that point. For more information on use visit www.treaddesk.com.