In case you're ever wondering what cockroach feces smell like in the morning, move into a dystopic concrete building, directly under the sun on Eagle Rock Boulevard. Eagle Rock, it's as far east as you can go without leaving the city of Los Angeles, but when you're there, all the possibility that rings through the streets of Tinseltown, has certainly dissipated.

The problem with Eagle Rock is that it can fool you; it can fool you so fast. You see a Trader Joes, a sign for a farmers market, a coffee shop selling cold-brew for seven dollars, and you think you're on the forefront. You think you're cutting edge; that you're the person who's in on a secret. Quite soon after, you realize you're in purgatory. Some strange universe where seasons don't change and buses arrive and disappear and nobody, not even the people on them, have any idea where they go. 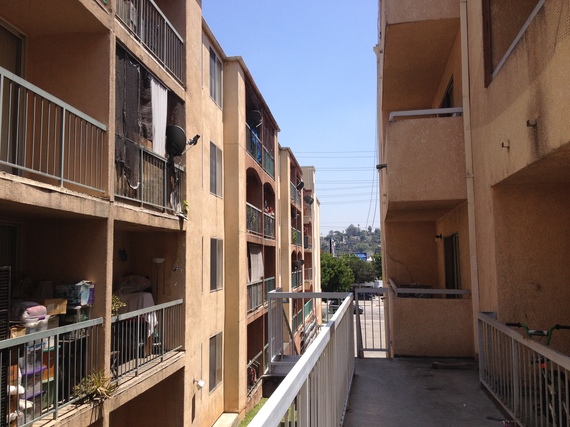 So you may wonder how someone ends up in the sort of place I did; in a place with dirt covered walls, leaks that persevered through a devastating drought, and a cockroach infestation beyond what words can describe.

My sister and I had been looking for apartments for months when this came along, a process that had quite often found us touring the city on public transportation. By the time we reached the apartment showings, it had already been given away to a thirty-five year old couple on the vanguard of gentrification. And since we already had to fight off a man with a basket and a cross-eyed woman who blamed us for Nazi Germany on the way over -- we didn't have much left.

We drove over to see what would become our new home, tucked between Glassell Park and what I like to refer to as "The Red Light District of Eagle Rock." My sister kindly escorted us in my Father's old red Prius, that she drove with no license or really any basic knowledge on how to operate a motor vehicle. After we thanked God for not killing us on the way over; we were greeted by Yuki, the on site manager with few teeth and an accent that mixed every Asian country and Mexico. We rode the elevator up to the second floor, and as it went in and out of deciding whether or not it was working that day, I took in the sights. There was graffiti all over the elevator, the emergency button was pushed so far in it no longer existed, and there was a smell. Have you ever smelled a human being decompose -- because I think I may have? When the doors opened and we meandered out, I had come to the conclusion that this was by far the worst place I'd ever stepped foot in, and it was about to be home.

In all honesty, the unit seemed fine -- that's how we got sucked in. It had new appliances, it was spacious, there was no carpet, and we could afford it. When we were done looking, we rode the elevator down, looked at Yuki and said, "We'll take it." We brought back the deposit twenty minutes later, and then, he gave us the keys. I was seventeen, not in school, and living two thousand miles away from my parents, but just like that -- I had rented an apartment.

My Dad came back out to LA to help us move in, oddly enough, he was actually the first one to spend the night there. He called us the next morning as we were making up our shared living room sofa. He told us we had roaches and when I asked if he had killed them he said, "I couldn't, they were a family, there were little babies. I couldn't take the babies away!" Then he started crying. 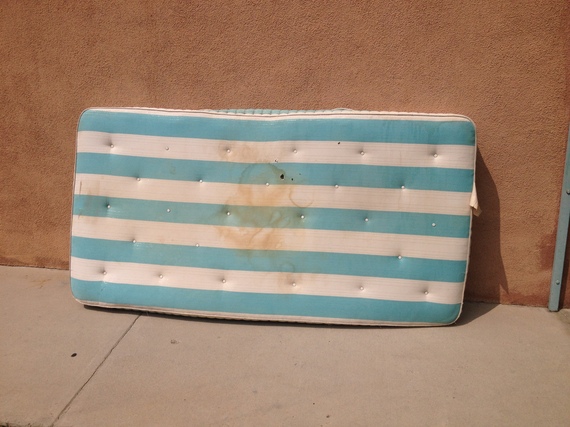 We probably could have gotten out of it there, but in my mind I had already committed to this. I had already decided that I could no longer share a couch covered in cat hair as my feet hung off the edge. I needed my space; I was beginning to lose it.

Within about a month of moving in, I had already begun to cater to the roaches. When I'd use the bathroom in the middle of the night, I'd turn on the light, close my eyes and yell "PLACES!" in order to give the cockroaches time to get to their respective hiding spots. When I came home late at night, I'd never turn on the light, I'd just go to sleep. And -- after about eleven o'clock, the kitchen was CLOSED. I even avoided having friends over at night, especially after one evening where I saw a roach climb up a wall and fall on my friend's shoulder repeatedly during a conversation about fear in the arts. I said nothing, of course.

I woke up every morning, swept their feces off of my counter tops, off of my floors, washed my hands, and then made breakfast. YUM! I did this in tears, or at least about half of the time, I did. It was a problem with no cure, it seemed like a pure manifestation of all the things I'd always felt internally, but now it existed in the external realm like a big constant "Fuck You!" from the universe. But, if you didn't think the cockroaches were enough already, there was also a constant leak in my closet and occasional HUMAN FECES in my sister's sink, you know, just to break things up a bit.

My sister and I fought constantly, because everything seemed to contribute to the infestation in some way or another. The main arguments were that she didn't sweep up the feces as much as I did or that she didn't do the dishes -- and when she refused to do those things, I developed a schizophrenic like tendency where I thought she was "working for the dark side." Which I now realize, is highly abnormal thinking and I really should consider talking to someone.

After about a year living there, we took a trip to visit our parents. While away, I started to develop debilitating anxiety at the thought of what the place would look like after two weeks of not turning the lights on. I also started to realize that some of the habits I'd picked up while living there were truly disturbing. When I got out of the shower, I shook the bugs off my towel, when I drank out of a glass, I inspected it for cockroaches first, when I made food, I kept examining it, pulling it apart like I'd been poisoned, and I never ever trusted black pepper (that's what the feces look like).

When we got back from the trip, we packed it up -- it was time. A new place fell into our lap quite nicely and finally we were out. The night before we moved out, our Landlady who was also a friend, and had known about our problem with our pests, called us. She said that she'd had a roach problem before and we should be careful while moving, because they can follow you wherever you go. That sentence was everything I feared, but I took in what she said and packed accordingly. 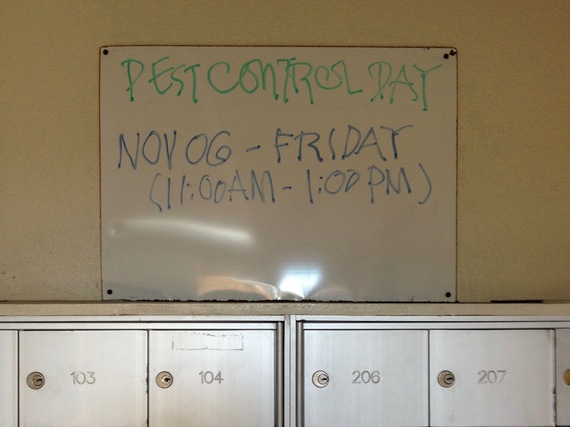 After I had decided to leave what had become my home, I began to see it for what it truly was. As horrifying as I had thought it was all that time, it was somehow worse. With fresh eyes, I noticed things that had gone completely unseen and suddenly I felt completely racked with guilt. The rest of the people in the other twenty-nine units, they didn't get to leave. This is how they lived, always, and they made the best of it -- never even so much as complaining. They had some strange form of Stockholm syndrome, where they had fallen in love with the building that was their captor, because that was the only way to survive. They couldn't afford to move out, buy ALL new things for a different home, a place that would allow a family of six to occupy a two bedroom. My white privilege had allowed me to be rescued from this place; I was getting out of prison and they had life on a crime they didn't even commit.

I live in Los Feliz now, my sister and I get along much better and I'm genuinely less insane. Every once in a while though, I think back to my very first day in the building. I walked over to the Thai place around the corner; I told the woman I moved into the building directly next door, that it was the peach one. She looked at me and said, "I don't know what you're talking about." There it was, nobody saw it, nobody saw them. When I pass these buildings on the street now, I feel elated I'm not inside but I'll always feel remorseful that somebody is and that I don't know their name.