I came to yoga via what theologian Matthew Fox might call the "yoga of despair." I felt completely broken, my life having been shattered to pieces by sexual violence. The world, which had previously been a place in which I could operate with relative ease, became terrifying and cruel, and my body a detested source of shame and discomfort.

Thanks to the support system I had in place I was fortunate enough to get help immediately. Even so, the repercussions were immense. I lost my job, my apartment, and any feeling of connection to my physical body. The psychiatrist I saw after the assault diagnosed me with depression, anxiety, dissociative disorder and PTSD. He asked me early on if I'd had any thoughts of harming myself. My answer came in the form of a question: Is wishing you were dead the same thing?

At my therapist's suggestion, as a means of finding a way back into my body, I began attending a yoga class. Many classes I spent lying on my back, sobbing, the pain of being in my body too great to bear. In these moments the teachers would hold space for me, somehow knowing that I needed to know that they were there and that they could bear to be witness to my distress.

Sometimes I would come into a hip opener and feel something release in me that was so profoundly painful it would take my breath away. But I would breathe and I would stay in the moment with the pain that was coming in giant waves, feeling as though it might overtake me at any moment. A few more breaths and I would discover I was still standing, rooted to the Earth, and that my body had not failed me. It was this lesson -- my body had not failed me -- that I had to learn over and over and over again. Yoga provided me, then and now, with an opportunity and a safe space to connect to this truth.

The effects of sexual trauma on the body, even after years of practicing and teaching, still astound me. I've experienced it myself and seen it in others and yet I am still taken aback by how much pain the body can hold and the various ways it manifests. When I was finally able to really sit with the pain of what had happened to me and become aware of the ways it was expressing in my body and my life, I was surprised to discover that underneath all that pain there was yet more pain -- older pain that had been with me since adolescence. I began to wonder, had I ever been embodied? Was the assault one big blow that knocked me to my knees or merely the final (admittedly, huge) straw?

It's no secret that growing up in our culture as a female is a tricky business. Even with all the advances that have been made by women in the last two generations, the increasingly loud message, both blatant and subtle, from media, advertisements, and popular culture is one of objectification, judgment, and shame surrounding women's bodies. (It's important to note that this rampant sexism harms men as well, differently yet profoundly, but I can only speak to my own experience.) Even young girls who are raised in homes where there is awareness and meaningful conversations surrounding the treatment of women are fighting an uphill battle due to the insidious nature of sexism.

My family of origin was not one that provided a respite from these harmful messages, but instead reinforced them. While the majority of conversations I had with my mother were focused on my moral character, the non-verbal messages communicated to me were much louder and more rapidly internalized: to be beautiful, one had to be thin; my body was open season for discussion and commentary; it was rude to refuse or deny physical affection if offered or requested. The list could go on and on but it can all be summed up with this: my body was not my own and, even worse, was something separate. There was me and there was my body.

I'm sure that this was not my mother's intention. After all, she had learned all of the same things from her mother and her upbringing, as had my grandmother and her mother before her. This is what happens, and while I have a lot of reason to hope and believe that things are improving, this is something that girls and women are dealing with day in and day out and will continue to for some time.

A spiritual perspective is one that does not see separateness but only wholeness in everything, and yoga is nothing if not a spiritual framework that ultimately leads to this conclusion. As such, it is no surprise that when I began a dedicated practice, all of these things rose to the surface and presented themselves for me to accept and work through. The fact was that the shame, discomfort, and disconnection I felt in my body, of which I had become so acutely aware after the assault, had been there a very long time.

I'd like very much to tell you that I handled these realizations with grace, that I immediately accepted what was being revealed to me and got to work with no complaints. Yes, I'd very much like to tell you that but it wouldn't be the truth. The truth is I've worked through much of this kicking and screaming, fighting my body and myself along the way, at times even using yoga to further abuse and subjugate my body rather than to inhabit it more fully; practicing too long and too hard and too rigidly. It has taken years to work through the pain and will continue, I suspect, to take many more.

Amidst the struggle to be fully embodied, though, I do have these moments of peace. Perfect moments where I am able to tap into the truth of who and what I am. I cherish these and enjoy them as they come, and try not to wish longingly for them when I find myself in a more difficult period.

I had been in a relatively long period of bodily peace and acceptance when I became pregnant with my first child. Pregnancy and childbirth were deeply spiritual and transformative experiences for me, as I suspect they are for most women, even if they do not name them as such. While I struggled with a feeling of loss of control as my body began changing to accommodate new life, it was also the first time I truly experienced my body, and therefore myself, as miraculous. I began to see it as a holy vessel for this precious child. Once you experience your body in that way it becomes very difficult to go back to treating it as anything less.

After giving birth I had a whole new body to experience. My hips were wider, my breasts fuller and lower, my skin looser, my feet larger, and my hair thinner. My asana practice was and still is, three years later, completely different since giving birth. I'd never want to give the impression that yoga has turned me into a person who is always mindful and accepting of what is and who is no longer fazed my these things.

Neither my partner nor I would probably care to admit how much time he's spent listening to me bemoan these changes. I haven't always been kind to myself, and I have at times forgotten how I experienced my body as holy and how I promised myself in those moments that I would never forget it. Pregnant and preparing for another birth, I found myself once again feeling out of control as my body did what it needed to. Now, seven months postpartum, I am still getting to know my now twice-changed body, struggling to breathe my way into acceptance and embodiment.

Yoga hasn't erased my past and it hasn't changed my body to match the cultural ideals of perfection and beauty. It has changed me so that when I experience these moments of disembodiment I more easily find my way back to wholeness. Each time I return faster and faster to the realization that my body is beautiful and strong. It has not failed me and it cannot fail me, because it is dependable and divine.

This is my yoga body. 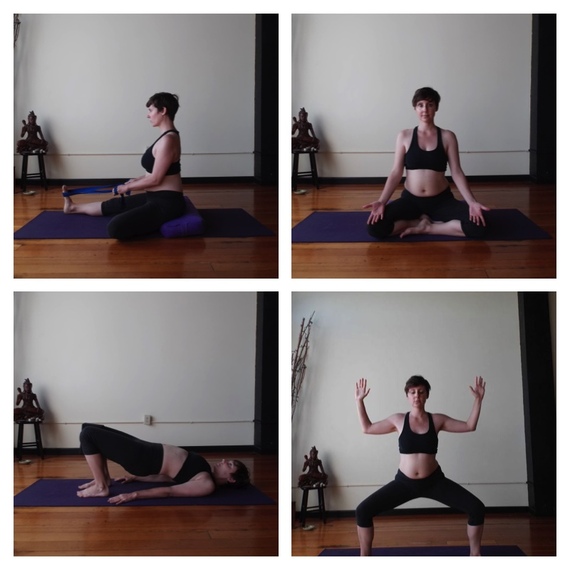