YANGON, Myanmar -- Tucked on the second floor of a turquoise building with peeling paint is a five-person tech startup that shares an office with Linn Construction, a property developer. Thar Htet, a cherubic 29-year-old Yangon native who dreams of Google-style success, does double duty as the founder of the app company, Zwenex, and a manager of the construction firm -- a family business that's currently helping to keep his tech venture afloat.

It's a telling sign of the state of the startup scene here in Yangon. Elsewhere, creating smartphone apps is largely considered the most nimble and least expensive path to riches. In Myanmar, which three years ago emerged from the 40-year yoke of a military dictatorship, it's the brick-and-mortar real estate business that has to bankroll the digital endeavor.

Myanmar typifies the kind of country that tech behemoths like Facebook and Google are plotting to connect to the Internet via drones and hot air balloons as they scour the world in search of more customers. Google alone is reportedly spending over $1 billion to launch a fleet of Internet-offering satellites. Just 1 percent of Myanmar's population had Internet access in 2012, the most recent year for which statistics are available. Its cell phone penetration rate, which reached 10 percent in 2012, is still one of the lowest in the world, below Cuba and Somalia.

But spreading the Facebooks, Googles and up-and-coming autochthonous apps through the unwired world is not only a problem of updating a nation's infrastructure, although it begins there. It's also a matter of rewiring the culture. Within Myanmar, Zwenex offers a glimpse at the kinds of challenges that stunted Internet access has created for local startups, problems that might not immediately be solved with faster wireless speeds.

Zwenex's office bears a passing resemblance to the headquarters of some Silicon Valley startups, only with more fluorescent lights and fewer beanbag chairs. At the far end of the room, Thar Htet has set up small a kitchenette with free coffee and biscuits. Past his glass-enclosed office and two desks for Linn Construction, four programmers -- all under 25, most hewing to a jeans-and-tees wardrobe -- sit at a row of desks mounted with black PCs. There, the similarities with Silicon Valley end.

The developers at Zwenex are not rock stars, ninjas, gurus or any of the other inflated nicknames the residents of Menlo Park are prone to give themselves. Their career path has made them oddities, even outcasts, among their relatives and friends.

Ye Lin Aung, a 22-year-old Zwenex programmer, said his aunt and uncle cut ties with him when he opted to study computers over medicine. Though the pair raised Ye Lin Aung while his parents were working overseas, they no longer speak to him.

"People's minds here are different. If you say you went to a computer university or technological university, they don't think it's very high," said Ye Lin Aung.

"My friends who are not from the IT fields, they don't know what I'm doing," another programmer agreed. "When I'm doing the big things, they see it as a small thing. They think, 'Oh, that is so easy.'" 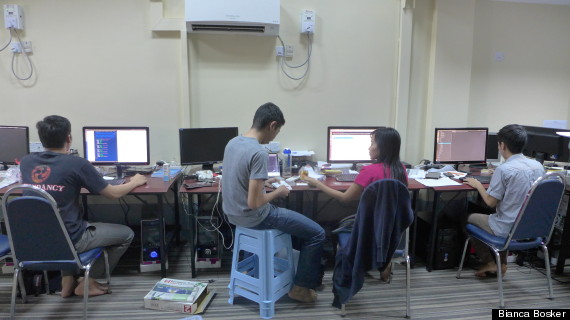 Above: A row of developers at the Zwenex office.

Myanmar's aspiring developers face a lack of support not only from their friends, but also from the institutions that are meant to teach them the skills to code. Anemic Internet access has gone hand in hand with shoddy technical education at Myanmar's universities, which were deliberately gutted by Myanmar's military regime. Until recently, some computer studies programs lacked computers, forcing students to write their code longhand in notebooks. Even now, many technical schools are still without Internet access, according to Nay Phone Latt, the head of a nonprofit that seeks to provide computer training to Myanmar citizens.

"There might be thousands of students and tens of computers, some of which are not working well," said Thar Htet. "Some students, they maybe graduated from the computer school and they've never used email before."

Thar Htet says he trains all his employees, and that he does so out of necessity. He complains that on the whole, computer-savvy Yangoners are more interested in being "crackers," meaning they'd rather perfect their app-pirating skills than build new services from scratch. This points to another problem the Zwenexs of Myanmar face: With wireless speeds both slow and costly, buying black-market apps is far easier than downloading them, according to Thar Htet. Installing a single app over Yangon's sluggish wireless networks could take the better part of a day, and Myanmar's cell phone subscribers must pay for Internet access by the minute.

As an alternative, enterprising cell phone shops have developed a brisk business charging smartphone owners 2,000 to 5,000 Myanmar kyat (or $2 to $5) to install a complete package of pirated apps, from Facebook to Angry Birds HD. The app makers never see a cut. Another favorite tactic is to use Zapya, a file-sharing app, to transfer music, photos and other software between friends' phones for free. 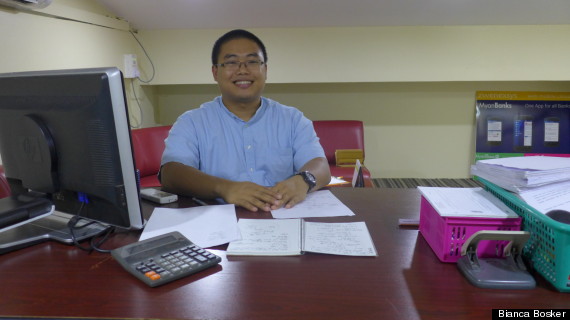 Above: Zwenex founder Thar Htet at a desk in his startup's offices.

Thar Htet has numerous ideas for apps, all pegged to the specific needs of the Myanmar people. But he won't build them because he's not sure how to turn a profit from his creations. He showed off a PowerPoint deck with mockups of apps like MyanMalls (a way for the small merchants who sell online to market to their customers), MyanAir (an app for travel agents to keep track of Myanmar airlines' flight schedules, which change frequently) and MyanBuses (an app to check bus times).

"I have more than this number of ideas," he said. "Piracy is a big problem here. We build it, we start selling it, they crack it and then they start distributing it. On the Internet they're claiming to be heroes like Robin Hood, but that's really hurting us."

Htoo Myint Naung, the CEO of the Myanmar startup Technomation, has come up with a promising way to bypass the crackers: He pays the clerks at phone stores a commission when they install his apps on their customers' phones. Technomation has partnered with over 200 shops, which purchase a USB stick they can use a set number of times before paying Technomation to "refill" it with more licenses.

Yangon's technophiles are plowing ahead despite the challenges. BarCamp, a loose network of tech-focused conferences held in hundreds of cities around the world, had its largest turnout ever at an event hosted last year in Yangon. Over 6,000 people attended the Yangon BarCamp in 2013, double the turnout just two years before.

Ye Lin Aung, the developer whose aunt and uncle severed ties after his turn toward tech, is among those who will forge ahead with programming, even with the toll it's taken on his personal life.

"Maybe someday they will see me successful and maybe they'll talk to me again," he said of his relatives.

"If you own the Facebook, maybe their mind will change," offered Thar Htet.

"Yeah," said Ye Lin Aung. He paused and smiled. "I'll have their data."