Myanmar made news this week, but not for reasons you might expect. The scene at the little health center in Thagaya in Yedashe township is an unmistakable sign of progress as the country emerges from decades of social and political isolation. For the first time, with support from the GAVI Alliance, a pentavalent vaccine was introduced that will defend children against five potentially fatal diseases. Over the next six months, more than half a million children in Myanmar will be protected from diphtheria, pertussis, tetanus, hepatitis B (hepB) and Haemophilus influenzae type b (Hib).

Some mothers cradled their babies, while others bounced them on their laps, as senior midwives and younger health workers lined up to administer the vaccine, which will be available to all children under the age of one. Babies and young children are at particular risk for hepB, a viral disease that can cause liver cancer later in life. Hib can cause meningitis and pneumonia, a largely preventable disease that is the leading killer of children under five worldwide. The new vaccines were officially launched during a ceremony in the capital Nay Pyi Taw the day before. 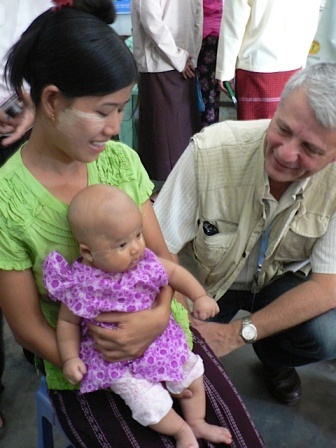 Along with the pentavalent vaccine, Myanmar also rolled out the measles second dose vaccine as part of the routine immunization schedule. The country plans to reach 1.1 million children over the next year, giving them protection against a virus that kills hundreds of people a day.

GAVI is a public-private partnership that reduces the price of vaccines in order to make them more readily available to people in developing countries. Introducing the pentavalent and measles second dose vaccines simultaneously will help GAVI and our alliance partners to immunize nearly an additional quarter-billion children by 2015.

But providing the vaccines themselves is only part of the story.

Countries must have strong health systems -- including well-trained health workers and proper storage facilities -- in order to get the vaccines to people who need them most. A grant to aid the vaccine introductions in Myanmar funds upgrades to the cold chain system that's vital for keeping the vaccines at the correct temperature so they remain effective.

As officials in Myanmar know, there's no room for error in this part of the process. Earlier this year, they faced weaknesses in the cold chain system that could have compromised the pentavalent vaccine introduction. In just eight months, the officials made some necessary, and impressive, adjustments.

In the heart of the city of Yangon, health workers proudly showed us how they keep the temperature regulated at the central cold storage site. This is just one of the links in a chain that includes the refrigerator at the local health clinic, and the portable coolers taken to the hardest-to-reach areas by health workers on bicycle or on foot. These workers are dedicated to doing their part to ensure that people in their country can lead healthy and productive lives.

Myanmar has shown that even nations facing significant challenges can build a more secure and stable future by investing in vaccines and immunization.