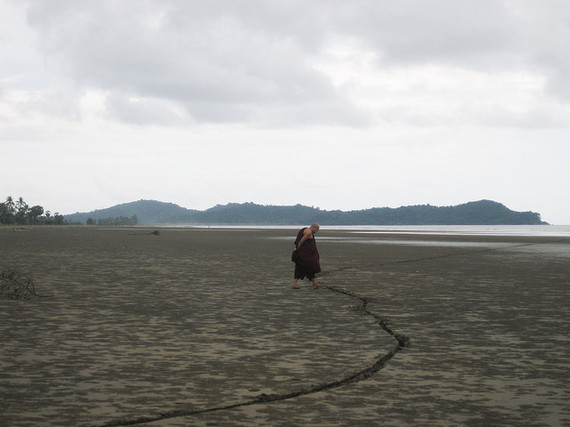 After a 10 hour overnight drive from Yangon, we finally arrive in Andin Village. It is starting to rain, turning the red dirt roads into mud, but we can't miss the large "No Coal" sign in Burmese, English, and Mon. Last May, the now empty football field hosted the latest in a series of protests against a proposed 1,280 MW coal-fired power plant from a Thailand-based Japanese company, Toyo-Thai Corporation (TTCL). The proposal also includes a massive new deep sea port to bring in coal from Indonesia and Australia to fuel the boilers. Nearly every house in the village has a "No Coal" sticker in the three languages-distributed as part of a survey of local opinions about the project. Out of 1300 households, we are told only one refused to place a sticker on their home. The rest display their opposition on their homes, cars and motorbikes.

Andin is part of Ye Township in Mon State, which sits in the narrow southern strip of Myanmar, bordered by Thailand on the east and the Bay of Bengal on the west. Peace in Mon is relatively new. The state was blacklisted by the former military dictatorship, and the Mon language and history were banned in schools. In 2010, the new government signed a ceasefire with the armed Mon group, opening the door for infrastructure and development. Now the people in Andin can openly teach their culture at a Mon language school in the village. But a monk from the Andin monetary told me he is worried the coal plant will bring new conflict to the village, pitting the Mon people against Burmese immigrants who came to the area looking for work.

Andin Village isrelatively prosperous. In a country with only 33% electrification, residents have access to electricity and the village has public wifi. And even if the village was not electrified, it is very possible that the people would not benefit from new generation. It is more profitable to sell electricity to nearby Thailand than to keep the power in Myanmar. This is why many foreign companies looking to build coal plants in Myanmar plan to send the vast majority of the electricity over the border.

While the people of Andin village mostly rely on agriculture to make their living, fishing is the business of choice in nearby Andin Thif. When we visit, locals are hanging fish to dry, while small boats bob up and down in the bay and two men work nets from the beach. They tell us that they are committed to sustainability, and have agreed to forgo more destructive fishing techniques common in Thailand and to preserve dolphins rather than catching and selling them. The livelihoods of the local people living near the proposed coal plant depend on clean water and land, and they estimate farming and fishing generates $5.8 million every year. It's no wonder that the project has united locals in opposition.

As we piled into the back of pickup trucks to drive out to the proposed site, the community members discussed how the process for public engagement has been marred by misinformation and coercion. When the first public hearing took place in May of 2014, no Myanmar companies were involved in the project. Afterwards, a domestic company began purchasing land, claiming they would use it for fish breeding. It was only at a second hearing in December 2014 that the people learned this land was actually for the coal plant. If they had known, many would not have sold. Because of the strong opposition to the project, the companies held this second meeting a long way from Andin. A poorly worded notice led locals in the new meeting location to believe the hearing would be about electricity. When they found out it was about a coal plant, many joined the opposition. Those in favor of the plant were largely brought in by the company from Ye.

When representatives from TTCL and the Myanmar based company visited the Andin Village monastery to show their respect to the monks, claiming that if they opposed the project the companies would withdraw, word spread like wildfire through the village. Soon, the compound was filled with protestors who poured out into the street. The monks had to ensure the safety of the representatives as they made their way back to their vehicles. Even so, the voices of local people were not officially recorded. When asked why the federal government signed a Memorandum of Agreement (MOA) with TTCL in April 2015, officials cited the two supposedly successful public hearings. The truth of the overwhelming opposition at the hearings is only recorded in the monks' detailed notes.

While the federal government is eager to move forward with the project, the Mon State Parliament, led by MP Dr Aung Naig Oo has tried to apply the brakes. As a medical doctor, he knows the devastating effects pollution has on public health. When he visited Andin last year, he was struck by the united front the villagers and monks presented. When he returned to Parliament, he brought their message that the project is unsustainable with him. In September, the state government announced it will not allow a feasibility study for the project to proceed. With momentum building, Dr Aung Naig Oo proposed a controversial measure to cancel the project entirely. In April the state parliament agreed. The following day, the federal government signed the MOA. However, Dr Aung Naig Oo is not deterred.

"We are strong. We have the strength to oppose the coal plant," he told me.

In the face of similar local opposition to coal projects across the country, Japanese companies like TTCL have scrambled to drum up support. Several people from Andin were invited to join a tour to visit a Marubeni plant in Japan using so-called "clean coal" technology. Clean coal is one of the most genius marketing strategies and lies the industry has presented. Since there is no such thing as "clean coal," companies in Myanmar can claim to have "clean coal" technology without being tied to any specific pollution controls. In general, they use the term to refer to ultra-supercritical coal plants (USC). However, USC refers to the efficiency of a coal plant, not to any of the pollution control measures that can reduce some - never all - of the deadly particulate, sulfur, mercury, and other emissions. USC also has nothing to do with the operation of a coal plant, including the storage of toxic coal ash. Coal ash can contaminate local water supplies, a particularly dangerous possibility in places like Andin where people rely on well water. And as Myanmar does not have set policies for air emissions, water emissions or ongoing monitoring, foreign companies are eager to line their pockets while freely dumping pollutants into the air and water.

Dr Aung Naig declined to join the trip to Japan, but locals Min Zaw and Seik Rot did, and they were not convinced. Min Zaw was concerned that the coal project would impact his fish wholesale business, and was eager to meet Japanese fishermen, but he was never given an opportunity to do so. Similarly, the tour did not assuage Seik Rot's fears for his orchard.

With opposition to the project only growing, officials are resorting to more drastic measures. The week following our visit, 26 locals, including the village chairman, were arrested after police received a letter complaining of harassment by those opposed to the project. But these actions by the coal plant's backers look like they have backfired. When they learned of the arrests, 350 people from Andin and the neighboring villages of Hnit-Kayot, Ywa Thit, and Thar-Karan traveled to Ye, with many asking to be arrested as well in solidarity.

Seik Son exemplified the community solidarity. After leaving home to study, she told me she returned to Andin to protect her village. She is concerned about the effect the proposed coal project will have on agriculture, and plans to research the social and environmental impacts. When I asked her what gives her hope, she said the community is very strong, and is supported by nearby communities and by non-governmental organizations who can help prepare information and support the effort to protect Andin. Having seen the commitment of the people first hand, I believe her.