Did you ever wish you'd asked one more question of somebody you once knew, who is no longer around to chat with? 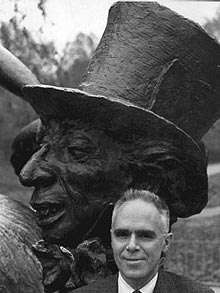 The great unasked question most on my mind in recent times is this: was prolific American man of numbers and letters Martin Gardner (1914-2010, of Mathematics, Magic and Mystery fame) familiar with any of the works of the Irish novelist and satirist who variously went by Myles na gCopaleen, Flann O'Brien, George Knowall, Brother Barnabas and other monikers, real name Brian O'Nolan (1911-1966)?

Martin died five years ago today, and I'm still kicking myself for never asking him about Myles. If that comes across as a ludicrous "out of nowhere" musing, please read what follows before passing judgement.

I'll readily admit that these men, seemingly from different planets, are among my literary heroes. Coincidentally, I discovered them totally independently of each other in Dublin bookshops in the 1970s. Yet, in the intervening decades, these disparate talents have stimulated and sustained increasingly convergent parts of my brain. My timely stumbling on a used copy of Myles Away from Dublin -- a collection of half-century old George Knowall columns -- at the War On Want shop in Belfast last week, only cements this tenuous association.

"Pick up anything Martin Gardner wrote," mathematician and magician Persi Diaconis once said. "You'll smile and learn something." The same could be said of the writings of Myles na gCopaleen (or any of his aliases), although the appeal of some of his output is admittedly anchored in a period and ethos specific to Ireland.

Martin Gardner was a prolific writer of non-fiction, most famously about mathematics, puzzles, and skepticism. Yet his friends and associates included Isaac Asimov, Arthur C. Clarke, Vladimir Nabokov, and Salvador Dalí; he was no blinkered scientist. His best seller, by a mile, was his Annotated Alice in Wonderland (1960).

I had the pleasure of knowing Martin for the last decade of his life, and I found him to be a generous, modest, unassuming man, who was little impressed with his own considerable successes. Right up to the end, he was a voracious reader and deep thinker, and a clear, no-nonsense, elegant writer on a huge array of topics.

Myles -- as O'Brien is most fondly remembered in his native land -- was a writer of great originality whose debut novel At Swim-Two-Birds (1939) was admired by Graham Greene, James Joyce, Dylan Thomas, William Saroyan, Samuel Beckett, Anthony Burgess, John Updike and Jorge Luis Borges. It was not a success until after it was republished in 1960, and its author later joked that Hitler hated his work so much he started WWII to stop it. For most of his career, Brian O'Nolan had to make do with a career in the stultifying Irish civil service. He was known and loved by many for his inventive and long-running column in the Irish Times, for which he invented the Myles na gCopaleen persona.

On the surface, these two writers could hardly be more different. Martin published over 100 books in his 95 years, and concerned himself largely with mathematics, science, philosophy, magic, children's literature and rationality. Myles only saw four of his humorous novels in print in his meagre 54 years; he died in 1966, leaving many loose ends and much unfulfilled promise.

Yet there are similarities and synergies. Both men were armchair travellers, extremely observant and analytical, well read and erudite. Both loved language and word play, and had a plethora of alter egos. Both could turn their hand to virtually any topic, and entertain their loyal readers while simultaneously educating them. Both disdained (and loved to skewer) petty bureaucrats, fools, fakes and charlatans of all hues.

Martin and Myles were private men, who usually chose not to reveal details of their own lives (or political inclinations) in their output. Both had a great sense of humor, though it wasn't often that Martin gave his readers a peek of this, and both had a healthy respect and wonder (tempered with a healthy skepticism) for the claims of science and technology, something not obvious to a casual Mylesian.

Less well known is the fact that Martin was quite knowledgeable about 20th century Irish literature, counting the now-forgotten Lord Dunsany among his all-time favorite authors. Martin's essays (and/or memoirs) include ruminations about him, Yeats and the early history of the Abbey Theatre, and Joyce.

Hence, I find it very tempting to think that Martin must have been aware of Brian O'Nolan's two most noteworthy and universally appealing novels, At Swim-Two-Birds and its brilliant follow up The Third Policeman (completed in 1940 but only published posthumously). It's the nature -- and cult status -- of these ahead-of-their-time works that makes this such a seductive idea.

Myles (sometimes as George) could wax lyrical about subjects as diverse as Henry Ford, Houdini, Sean O'Casey, gombeen politicians, the health services in Ireland and in the UK, porter, whiskey, spuds, the differences between English as spoken in Europe and America, and the practical difficulties of spending exactly £300. He mentioned Hamilton, Einstein and Schrödinger in assorted (and sometimes cranky) essays. Of dowsing for water, he opined that it "takes its place with soothsaying, curing sick cows by looking at them, and putting a curse on a fellow man." (Debunker supreme Martin would have roared with approval.)

Many such revelations are buried in the half straight-faced, half funny, Myles Away from Dublin columns, written in the years 1960-1966 for a provincial newspaper under the nom de plume George Knowall. Also found therein are what I believe are glimpses of the real Brian O'Nolan not encountered elsewhere. He is well informed (and generally on the right side of history) when it comes to world affairs (e.g., the Irish role in WWII, the Cuban missile crisis), resolutely against racism, fascinated with the history of the motor car, and surprisingly quite conversant on many matters American.

In one piece, he asks, "Could Henry Ford have written the Book of Kells? Certainly not. He would quarrel initially with the advisability of such a project and then prove it was impossible. And yet it wasn't." In another, George Knowall (in character?) lets slip that he has just written a book. He chides the reader who would ask what it's about. "That question is foolish," he notes. "We modern writers have moved away from the ancient idea that a book must be about something."

No truer words were ever spoken, his own At Swim-Two-Birds from 1939 now being viewed as a postmodern masterpiece of comic storytelling. The convoluted logical labyrinths of this metafictional classic would surely have delighted Martin. Likewise The Third Policeman, with its portrayal of a hell on earth and its frequent references to the invisible but authoritative man of science de Selby (one can't help thinking of Martin's creation Dr. IJ Matrix); not to mention the hilarious atomic theory of the bicycle.

Given Martin Gardner's apparent obliviousness to the fine points of food, it's unlikely that he ever read the works of another of his contemporaries, chef Julia Child (1912-2004), with whom he had a surprising amount in common, as discussed here a few years back. Jim Henle has a whole chapter on the hitherto unnoticed Gardner/Child parallels in his great new book The Proof and the Pudding: What Mathematicians, Cooks, and You Have in Common (Princeton, 2015).

I don't know if Martin and Julia ever met; maybe Julia read Martin, but there is no reason to suppose to. We also have no reason to suspect that either Julia or Myles were aware of each other's existence, though Myles aired his views on plain food (and drink) now and then.

That still leaves one other question, whose answer is also probably undeterminable. Did Myles ever read Martin?

Certainly Myles loved trick questions and bar bets, as did fellow prankster Martin. At the end of a Myles Away from Dublin column called "Questions, their pleasures and perils," the author exhorts his readers to try the following:

"You casually announce that you have memorized the entire telephone directory. You will be told, no doubt politely, that you are a liar.

Very well, you say to some individual, get pencil and paper and write down absolutely any four numbers that come into your head... now multiply that four-figure number by 9... Now add the figures of the result... Now, get the telephone directory... tell him to go to the page in the directory that bears his last number. If, say, it's page 31, count down the telephone numbers till you reach number 31. You now tell him the telephone number and the name and address of the subscriber.

Explanation: no matter what four numbers he starts with... the answer will be 9, 18, 27, or 36. You have, of course, memorized the appropriate entries on those pages."

That reads like it came straight from Martin's "Mathematics, Magic and Mystery" (1956)!

Martin and Myles were unceasingly curious, and had an unquenchable thirst for understanding the meaning of everything -- of life itself. The former lived a long, steadily productive life, and left the rest of us so much to ponder. The latter was less fortunate -- who knows what else he might have written had he lived longer and his novels had been recognized for the landmarks they are? He once hauntingly wrote:

Many a man has spent a hundred years trying to get the dimensions of it and when he understands it at last and entertains the certain pattern of it in his head, be the hokey he takes to his bed and dies.

Did Myles understand it all, after half as much time spent cogitating, and take it to the grave with him? He died on 1st April, a date also of significance to Martin.

I believe that Martin figured out many of life's mysteries to his own satisfaction, long before he left us. He shared the results, as he saw them, in writing. However, some of his other questions, like mine, remain unanswered. Such is life.

Colm Mulcahy is Professor of Mathematics at Spelman College in Atlanta, Georgia, and author of Mathematical Card Magic: Fifty-Two New Effects (AK Peters/CRC, 2013). He tweets at @CardColm, and encourages Gardner fans to follow these Twitter accounts.