Caitlyn Jenner is public with and proud of her new name -- but using it on Facebook could have gotten her reported under the site's current naming rules.

Approximately 100 protesters -- who, like Jenner, go by a name that's not necessarily reflected on a Social Security card or tax return -- gathered Monday outside Facebook's Silicon Valley, California, headquarters as part of the MyNameIs campaign. 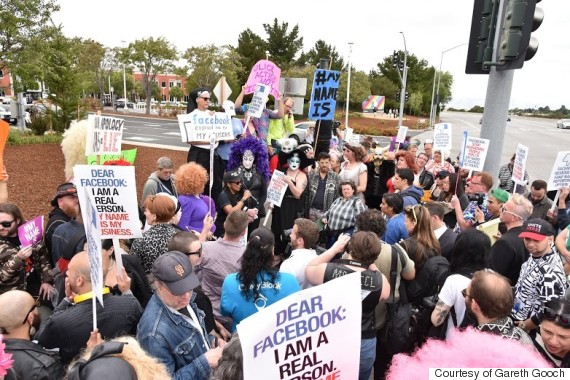 Facebook members can only use what the company calls "authentic identity" -- meaning names that "your friends call you in real life" that can also be backed up by certain documents, many of which must be government-issued. Users believed to be in violation of these rules can be reported to the company and their accounts can be deleted.

"What Facebook has been incredibly slow to realize is that their name reporting system has been used as a tool of harassment and abuse, to frighten, endanger, and attempt to out thousands of people," Cruel Valentine, a Chicago-based burlesque performer, told The Huffington Post in a message. "I understand that people on Facebook sometimes pose as others, or hide behind pseudonyms to conduct abusive behavior online, but it is so important that we distinguish between those users and folks who are just being their authentic selves."

Trisha Fogleman, a co-organizer of the protest, agrees.

"The policy hurts identity," she said. "It does not affect behavior."

"As a survivor of domestic violence or [for] other people who have been bullied or harassed, it’s a safety issue," she added. "People should should still be able to be connected to their community and be safe from their harassers."

Valentine said her account was suspended for nearly two months because she refused to provide her legal name. Valentine, who uses her accounts for business reasons, said she received no responses from Facebook to her appeals.

"Some performers make the choice to go by their stage names and legal names interchangeably," Valentine said. "For many of us, though, it is a matter of safety. Due to the adult nature of much of my work, it is very important that I keep my legal information separate from my public life. I've had experiences where fans have made attempts to gain access to my private life, and I've been threatened [and] stalked in the past."

Many Native American users who incorporate animals and natural references into their name -- like blogger Dana Lone Hill -- are flagged on Facebook because their names sound fake to non-natives, the BBC reports.

For other vulnerable groups, like transgender youth or domestic violence survivors, obtaining official documentation of the name they wish to use for privacy reasons can be hard to come by. Unlike other social media sites like Instagram, Twitter, Ello and Google Plus, Facebook's naming rules force some people to choose between staying connected to their community and potentially exposing themselves to their harassers and abusers. 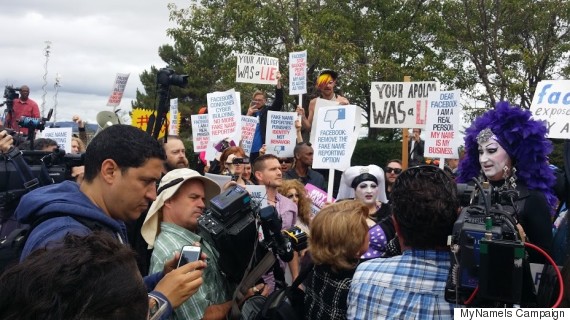 First, ditch the option to report people for their names.

"We think that it’s obsolete. It targets identity, not bad behavior," Little Miss Hot Mess said. "The reality is there are more direct ways of reporting bad behavior, like impersonators or harassers."

Third, make a more clear and transparent appeals process if an account does get shut down.

"As it is now, there’s no way for a user to reach out to Facebook customer service," Little Miss Hot Mess said. "The only option they give is if your account has been fully deactivated." 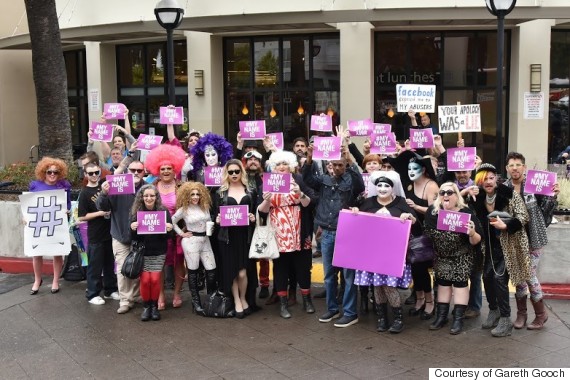 In response to Huffington Post's request for comment, Facebook Spokesman Andrew Souvall pointed to a post released Monday in which Executives Justin Osofsky and Monika Bickert addressed some concerns with the authentic name policy and outlined changes the company had made to its verification policy over the last year. Among other alterations, Facebook said it had updated its language to note that authentic names don't necessarily have to be legal names -- though certain proof is still required if an account is flagged.

"For various reasons, people had difficulty with the process of verification and we are sorry to anyone who has been affected by this," they wrote. "So, in consultation with local and national LGBTQ community members and others who provided valuable suggestions and feedback, we’ve made significant improvements in response to some of their concerns."

Attendees of the protest said the company did not meet with them during Monday's demonstration. However, Fogleman said the Facebook Pride group did have a few tables of snacks and water set out for the protesters.

"Facebook has made great strides lately with expanding their gender identity and pronoun options, but so many of the people who would benefit most from those awesome improvements are being locked out of their accounts because some random person on the Internet thought their name didn't sound real, or that the way they looked didn't match up with their profile name," Valentine said. "It's crazy to me how progressive this company can be in one area, while remaining so ignorant in another."

Little Miss Hot Mess said it's crucial to remember that for many users, Facebook isn’t just a fun way to procrastinate.

"For a lot of people, it really is a lifeline to their communities and their resources -- especially if they’re isolated geographically or socially. It really is the public utility of our time," she said.

"In some ways, it’s about much more than Facebook," she added. "It’s about setting precedence for how we identify ourselves online, how we express ourselves."