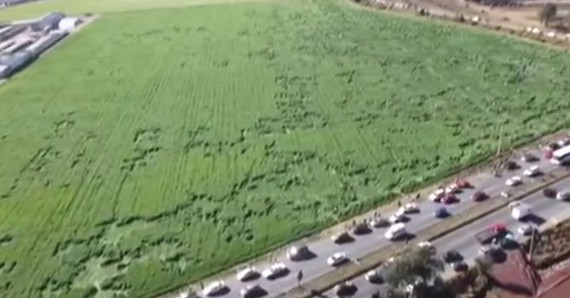 It's the usual gig. Mysterious crop formations appear over a 7 hectare chunk of land in the Mexican country, local residents report seeing bright lights on night in question, suspiciously swift government officials collaborate with scientists to photograph and study the entire place before anyone else, and of course, thousands of people from the locality and outside crowd up to see the mystery enigma.

The scene of action is about 25 kilometers from Mexico city. Spanning over a huge seven hectares, a massive crop formation appeared over a barley field in Texcoco, Mexico overnight, this Christmas Eve. Unlike typical crop formations, this one lacks any particular artistic formation, just irregular patterns edged up on barley.

The authorities were reported, and while Mexican federal and municipal authorities were yet to study and determine what may have caused the formations, they were joined in by a chaotic crowd of two thousand curios visitors. So much so that they had to (suspiciously?) place men to guard the place from vandalism as they study the crop circles.

Like gifts left by Santa, the crops appeared to the eye on Christmas morning, while couple witnesses reported seeing bright lights around the area the night before.

The crop circles strangely lack and intricacy or complications involved in most, leading viral social media posts to speculate that aliens created them after "partying hard" on Christmas Eve.

As of today, the Texcoco mystery crop circles remain completely and totally unexplained.

Remember to visit All About Occult for more.