TED, the progressive California nonprofit that brings luminaries of technology, entertainment, and design together for the sake of world betterment, has made an unexpected choice for its seventh annual $100,000 TED Prize: JR, a 27-year-old street artist who, under a mysterious cloak of semi-anonymity, has been pasting monumental black-and-white photographs across the urban infrastructure of the world's poorest slums. 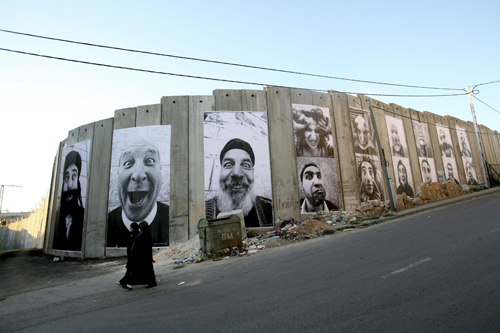 One of Parisian street artist and TED prize winner JR's street installations on the wall between Israel and the occupied Palestinian territories. Courtesy JR/Agence VU

In the past, the prize -- given to a charitably-minded figures from diverse fields who then choose a "wish to change the world" -- has been allotted to such global figures as Bill Clinton and Bono, as well as members of the arts sphere like author Dave Eggers, architect Cameron Sinclair, and photographers James Nachtwey and Edward Burtynsky. According to a statement, TED singled out the 2011 winner for the dramatic interventions the artist -- whose provocative London dealer was recently profiled in Modern Painters -- has staged around the globe.

"In Rio, he turned hillsides into dramatic visual landscape by applying images to the facades of favela homes," the statement says. "In Kenya, focusing on 'Women Are Heroes,' he turned Kibera into a stunning gallery of local faces. And in Israel and Palestine, he mounted photos of a rabbi, imam and priest on walls across the region -- including the wall separating Israel from the West Bank."

According to JR's own Web site, his artistic practice -- which he writes "mixes Art and Act, talks about commitment, freedom, identity and limit" -- began when he found a camera in the Paris subway leading to his ownership of "the biggest gallery in the world": the world itself. He dislikes being called a street artist, and prefers the title "photograffeur" (graffeur means "graffiti artist" in French), the New York Times reported. The Times also referred to JR as a "Robin Hood-like figure," although he will not announce until the TED Conference next March how he plans to use the prize to help the impoverished subjects of his work.

In recent years, the money has been to fight against obesity (British chef Jamie Oliver, the 2010 winner) and to build up a health care system in Rwanda (Clinton, a 2007 recipient). JR will likely use his winnings to continue his guerrilla artistic installations, as he has done with money earned at auction and in galleries in the past

JR first heard of the existence of the TED prize two weeks ago, and initially was wary in communicating with prize officials through Skype, disguising himself in dark glasses and a low-brimmed hat, according to the Times. "I'm kind of stunned," he told the paper. "I've never applied for an award in my life and didn't know that somebody had nominated me for this."

Visit ARTINFO to learn more about the Parisian "photograffeur" who plasters his massive photos in impoverished locales around the world, to view a photo gallery of his works, and to read a profile of JR's London gallerist, Steve Lazarides.