Scientists are as giddy as an enchanted snowman, as summer solstice approaches on Titan, Saturn's largest moon.

With more sunlight shining on the moon's northern hemisphere, Titan is revealing new secrets, such as a mysterious bright object that researchers have dubbed the "magic island." 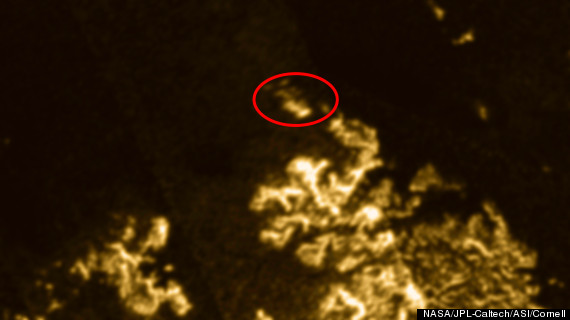 Bright spots in the hydrocarbon lake Ligeia Mare could be waves or bubbles.

The bright spot, in the hydrocarbon lake Ligeia Mare, is one of several such spots discovered on Titan in 2013 with instruments aboard the Cassini spacecraft. Researchers think the spots could be floating methane "icebergs" or other signs of warming, such as waves or bubbles, said study lead author Jason Hofgartner, a graduate student at Cornell University in New York. [See Images of the 'Magic' Island & Other Titan Views]

The findings were published today (June 22) in the journal Nature Geoscience.

The spots are among the first hints that Titan's methane and ethane lakes may be stirring in response to the summer warmth, similar to how lakes on Earth respond to the changing seasons. Until now, the lakes were extraordinarily smooth. Scientists found the smoothness puzzling, however, because Titan's surface has wind-driven features such as dunes.

Researchers hope that Titan's summer may brew up storms, as happens on Earth. "Now that we're going into the summer solstice, we're looking to find whatever active processes might be powered by the [sun]," Hofgartner said.

"This is some of the best science ever to come out [of] Titan, and we still have three more years to make discoveries," he said.

The team's excitement is reminiscent of Olaf the snowman from Walt Disney Pictures' hit movie "Frozen." In the film, Olaf longs to "see a summer breeze" and "find out what happens to solid water when it gets warm!" Only Olaf wouldn't need magic to survive on Titan.Titan's surface temperature is just below methane's freezing point — minus 297 degrees Fahrenheit (minus 183 degrees Celsius). Because Titan is 10 times farther from the sun than Earth is, the temperature difference between summer and winter is much less dramatic, Hofgartner said. When the solstice peaks in 2017, temperatures will be just a few degrees warmer than in winter, he said.

Titan is the only body besides Earth in the solar system with lakes, rivers and small seas. Scientists think the summer solstice may warm the moon's lakes enough to release gases (the aforementioned bubbles) or chunks of methane ice. Some models suggest that moisture and heat rising from the lake surfaces might even trigger small-scale tropical cyclones, similar to hurricanes on Earth.

The amount of sunlight in Titan's northern hemisphere has been slowly building since 2009, and will top out in 2017, the researchers said. Titan's north pole region was dark when the Cassini spacecraft arrived at Saturn in 2004.