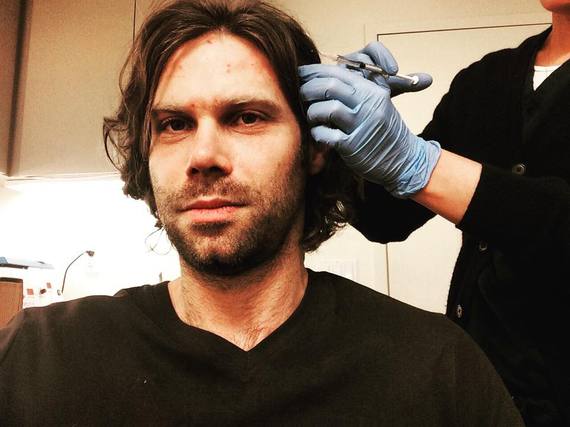 I got sent home from school with my first migraine at age 9, fairly sure my head was about to explode. The neurologist gave me an MRI, the eye doctor gave me reading glasses: Grown-ups can't fix everything.

I got through middle and high school with migraines clustering for days before dissipating, my frustration growing after each round of experimental drugs failed to help.

I approached college with symptoms of bipolar disorder and a particularly malignant round of migraines, convinced this stabbing resurgence was a punishment I well deserved; enhanced by a deadening sadness or rapid succession of insults, commands or whatever my psychosis threw at me.

After a trip to the emergency room and a week of in-patient treatment I began treating my bipolar disorder in earnest with the hope my migraines would subside as well. When my mind began to mend and my mood stabilized I was so relieved that when they did return, I refused to complain and go back into the system.

The hospital had prescribed me a new class of migraine pain medications which improved enough to help get me through college so I took it day-by-day, writing papers and not missing too many classes. If I took a pill at the start of a migraine I could usually kill it or at the very least, delay it till a time when I could sleep it off.

I managed to graduate which back then meant losing my health insurance so I cobbled together a sequence of clinics and discount programs to keep the refills flowing but my trips to neurologists & psychiatrists had effectively come to a close.

Ten years later I'm 32 and 3 months into having health insurance (thank you Obamacare) - I'd just completed a long day in the studio working on a new album and am holding my head between my knees on the G train, hoping to make it the next 4 stops so I can induce vomiting in private and pass out in peace.

I woke the next morning with a migraine hangover, a better appreciation of sick subway riders (they're not all drunk), vomit in my clothes as well as a renewed desire to end this debilitating nonsense once and for all.

With the best neurologist my newfound insurance would cover I set about on yet another round of tests to assure that I still do not have a brain tumor or other physical malfunction causing these episodes. Another month was spent compiling my 'trigger' diary to conclude that there is still no obvious pattern to my migraines other than the fact that they are extreme, persistent and disruptive.

We decided to take a chance on one of the latest preventative treatments: Botox. I'd heard of this but thought it was ridiculous, why would I want to inject botulism into my head?

It wasn't until I thought more about all the drugs I was ingesting into my blood stream to circulate through my entire body that a localized treatment appealed more. If the pain is in my head, why not focus there?

High on the hope of a new treatment, it wasn't until my Dr. was filling up the first of many syringes that I thought to ask how it works,

'Does this prevent migraines? Or just make me not feel the pain?'

I asked a similar question to my psychiatrist when trying out different 'bipolar meds', 'Why am I taking anti-seizure drugs to control my mania?'

Much like then, the answer this time was, 'We don't know'.

And much like my 9-year-old self, I was reminded that it's not only adults that don't know everything but also doctors and humans in general - we are all winging it, making it up as we go along;

'Why? & 'How?' are questions we don't often have answers to.

For about a month I had no migraines and was psyched but tentatively so. I'd wake up every morning waiting for that throb, stab, or ache but it didn't come - Could this really be true?

When they did return it was like nothing had ever happened, like an old friend I hadn't seen in years picking up right where we left off with a punch in the face. I'd wake with a headache, nibble at a pill, call into work and go back to bed. Or it would sneak up on me during the day and I'd put my hat on, then my sunglasses, waiting for death.

You can only get Botox every 3 months so my Dr. convinced me to start a preventative drug which at the very least sounded better than desperately swallowing something when I'm already in pain. The kicker? Much like the drug I already take to control my bipolar this is another 'anti-seizure' drug similar to the one I'd been taking for the last decade, which while helping keep me emotionally stable had not helped my migraines.

It's too early to tell but I'll take it for at least 3 months because I can't keep living like this. I recently got my 2nd installment of Botox and 6 weeks in am feeling pretty good, they say it may have a cumulative effect so I'll stick with it while also taking my new pills.

Maybe some day we'll pay doctors to keep us away, to keep us home, to keep us healthy but until then I'll continue to attempt controlling my migraines even if no can solve mystery of why.