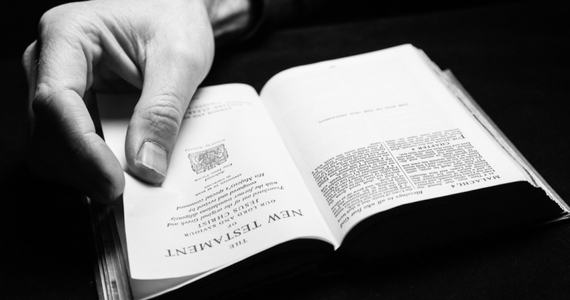 What is the Bible? Is it a collection of scriptures written by men, or something more?

Conservative Christianity affirms the idea of "Biblical Inerrancy;" that is, the Bible is the literal, Divinely-inspired Word of God. Whether or not they accept the scholarly consensuses on authorship of specific books (and some do not) they do believe that these authors' pens were guided by the hand of God, and thus the bible is in a sense perfect. This can be expressed in two nonexclusive ways: 1.) that the bible is without error, and 2.) that the bible does not affirm anything that is not true.

This idea is the source of all misuse and misunderstanding of biblical passages.

If you believe God wrote the bible, it is quite easy to imagine a certain passage applies directly to you and the world you live in. Obviously; God is timeless, so why would He write something intended only for a specific time period?

The problem with biblical inerrancy is that it's utter nonsense, as a basic reading of the Bible will show. For example: in Genesis 1, God creates plant life, and then Man. In Genesis 2, God creates Man first, and then plant life. Both of these things simply cannot be true, even in God's omnipotence, for omnipotence doesn't extend to the logically impossible. A couple other brief examples:

If you read each gospel's account of the 12 apostles, it is clear that there are more than 12 names and none of the gospels precisely agree on who they were.

Jesus says he comes not to bring peace, but a sword, and then He also says that all who live by the sword shall perish by the sword.

In Galatians Paul writes "there is neither slave no r free," but then in Titus, Paul apparently writes that slaves are to be subject to their masters. Similarly, in 1 Corinthians Paul says that women may "pray or prophesy" but only with their heads covered, but then in several other letters Paul apparently tells women not to speak at all.

If the Bible is perfect, how can it contradict itself so much? Some may look at these and other examples and shrug, grunting something about "God working in mysterious ways." For the rational-minded among us, this answer will not suffice.

The truth is that the bible is a human product, each book written in a time and place for a specific audience, by authors who were shaped by their experiences of God. Therefore, in order to correctly understand and interpret the bible, you must place the book you are reading in proper historical and theological context.

We will take some examples. In a famous scene from the synoptic gospels (Mark, Matthew, and Luke,) Jesus is in Jerusalem during the last week of his life when a group of his enemies (Pharisees in Mark and Matthew, "spies" in Luke) ask him, "Teacher...is it lawful to pay taxes to Caesar, or not?" (Mark 12:14 ESV; Mark is used because it is earliest.) Jesus's reply: he asks them to produce a Roman coin, emblazoned with Caesar's face. "Jesus said to them, 'Render to Caesar the things that are Caesar's, and to God the things that are God's'" (12:17).

Taken on its own, as it often is, this statement is used by mostly well-meaning but ignorant Christians to support the idea that for Jesus, religion and politics are meant to be separate and Christians are meant to be obedient to earthly authority. This reading betrays a fatal lack of context.

First, it is said that the purpose for the question was "to trap him [Jesus] in his talk" (12:13). If Jesus answered yes, it's fine to pay taxes to Rome, he risked losing the support of the crowd, which earlier had prevented his enemies from seizing him. If he answered no, then he was committing treason against Rome and could be arrested. Understanding this, Jesus's reply is a stunning display of political savvy.

According to Roman imperial theology, Caesar was the Son of God, divine, and God in human form. To the Jews, his face on a coin was a graven image, prohibited under the Law (indeed, Pontius Pilate himself nearly incited revolt when he displayed Roman standards with Caesar's emblem in Jerusalem). So when Jesus's opponents produced the coin with Caesar's face, they were in violation of Jewish law and had lost any moral high ground they might have had. "Render unto Caesar..." then becomes not a lesson about separation of church and state or an instruction to pay our taxes, but a calculated non-answer that made Jesus's critics look weak and foolish in front of the crowd of his supporters. Even more, it is a fierce indictment of Roman rule that led, in part, to Jesus's death: by implication, Caesar is not God.

Our next example is from Paul, a favorite of conservative Christians. This is the (in)famous passage from II Thessalonians chapter three, in which Paul says: "The one who is unwilling to work shall not eat" (II Thessalonians 3:10 NIV). It is a clear statement most often used to argue against social welfare.

First: there is a strong possibility that Paul did not write this letter. Of Paul's thirteen letters in the New Testament, only seven are unquestionably his. Two (including II Thessalonians) are disputed, and four others are almost certainly pseudepigraphic (aside: why would a perfect, divinely-inspired work have falsely attributed passages?) For the purposes of this argument, however, we will set this possibility aside and presume that II Thessalonians is authentic.

By placing the aforementioned verse in the context of the preceding and subsequent verses (remember, none of the books of the bible were written with verse or chapter breaks) and bearing in mind the type of society Paul was writing to, its true meaning will become clear.

The full text refers to small communities of Christians living in what Marcus Borg and John Dominic Crossan refer to as "share communities" (see their The First Paul,) a term I will ape from them because it accurately describes the way early Christian communities functioned: they would gather, once a week for the Lord's Supper, and irrespective of social class they would break bread together, each pitching in whatever they were able so that everybody had enough. Evidence for this is given in Paul's authentic letter to the Corinthians, in which he rebuked the wealthy among the community there for mistreating the poor among them (I Corinthians 11:17-22) by not sharing the food equitably.

Back to the passage from II Thessalonians. If you start from 3:6 and continue through 3:15, keeping the idea of a share community and especially of a "share meal" in mind, the conclusion drawn is much more specific than simply, "he who does not work shall not eat." The author is referring to people who have been taking advantage of the Christian community to obtain free food without participating in the works of the community, the same works referred to in the much-misunderstood "faith vs. works" debate (the same Greek word is used in both original manuscripts).

The issue at hand is not about employment but active participation in the community mission. He who does not work to benefit the Christian community can not reap its rewards. The misuse of this passage to imply that people receiving social welfare are "lazy" or to argue against the necessity of a social safety net is quite simply bad history and bad theology.

I could go on and on with examples, but that would be beyond the scope of this already-long blog post. These few examples I've given demonstrate clearly that the Bible cannot be read uncritically, cannot be accepted as the true and divine Word of God. I would argue that the Bible requires devoted and critical study to fully understand, and this is a lifelong pursuit (the Bible is long, folks).

So next time a conservative quotes II Thessalonians to disparage welfare recipients or Jeremiah 1:5 in an abortion debate (that text refers specifically and only to the prophet Jeremiah), remember to call them out on it. Chances are, they don't actually read the Bible.

(A version of this post originally appeared on Political Moll).