It is fascinating to watch when, for example, you are on a plane and the person next to you asks, "So what do you do?" and you reply, "I am an experimental high energy particle physicist." The interplay of human emotion that washes over your companion's face is amazing. It has the complexity of a glass of wine. It is a subtle blend of panic and distress, with notes of nausea and hints of anguish. You can see the flashback to those torturous days of high school physics play across the person's face with more clarity than anything you will watch on the in-flight entertainment system.

Avoiding this exact look was one of the main reasons that I agreed to spend the last five years being filmed for a documentary about particle physics called Particle Fever. Opening up your life to a camera crew is intrusive, but I did so because I am determined to see one major myth broken: that physics means math. While it is true that a certain level of math is required in physics courses, and that some physicists use lots of math, a career in physics by no means enslaves you to a life of scribbling Greek letters on a chalkboard.

I am an experimental physicist, and with 3,000 of my fellow colleagues, I helped build the ATLAS detector at the Large Hadron Collider, which is the size of a five-story building, encompasses 100 million electronic channels and has more than 1,800 miles of cable. To build this detector, 38 countries had to agree to the micrometer. 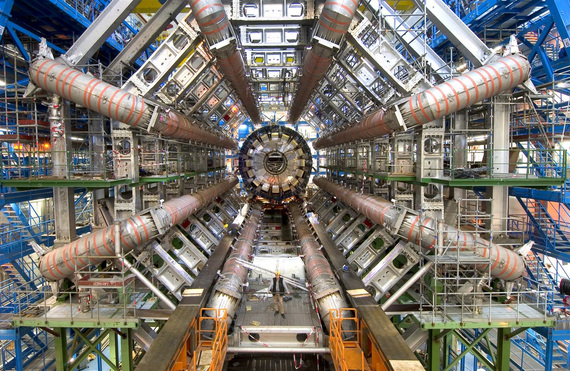 My daily work life has involved a mixture of thinking about the big questions (like how can we use this detector to search for dark matter particles), international relations (like managing a group of French, Russians, Georgians, Brazilians, Swedes, Italians and Americans) and large-scale project management (for example, we have 5,000 feet of cable that has to be run by next Tuesday). Zero math.

As a student, I hated physics for the same reason that most people do: It was boring. High school physics was a drag. In college I took physics begrudgingly, and hated that too. So what sold me on physics in the end? I needed cash, so I answered an advertisement for a summer job in a physics lab assembling electronics for a ground-based gamma-ray experiment. It was love at first sight.

The lab was a combination of the energy of Steve Jobs' cluttered garage together with shiny and new electronics machinery. But what caught me was not the lab or the high-tech tools; it was the designing a complex machine in order to answer fundamental questions of nature. This was the "big questions" stuff. And I loved it.

After that summer I immediately changed my major to physics, took the minimal number of physics courses (so minimal, in fact, that I almost failed to graduate), and spent the rest of my time in the lab. In other words, I suffered through the math so that I could do physics.

I consider myself lucky because if I hadn't answered that random advertisement, I wouldn't be a physicist today. And my experience is not unique: Many of my colleagues also came to the field through one of its many back doors. So how do we change the image of a physicist so that people, especially middle- and high-school students, have a better idea of what a career in physics means?

Big media projects like Particle Fever are definitely exciting and mind-blowing and have the potential to reach large audiences, but change doesn't have to come from the national level. Many times, change is most effective eye-to-eye.

For parents and teachers, talk to the researchers at your local universities or businesses. Ask if a student can spend one day or one week in the lab. And don't send the student whose science project always wins; send the student whose project is second or third but who doesn't think that he or she wants to pursue a career in science. For my fellow researchers in both academics and industry, talk to your local schools. Give a talk to describe the cutting edge of research in your field. Invite some students into the workplace.

Of the dozen or so students who have spent a week in my lab, four of them have told me later that that experience was pivotal in their decision to pursue science. Even the smallest moment can lead to a big change in perception, and on that airplane, it could be the difference between "I hated physics" and "I spent time at the coolest lab!"

Physicist, Kirchhoff-Institute for Physics at the University of Heidelberg