Take my young dog Trout, for example. Trout, like most Hound/Terrier crosses, loves to chase rabbits. When she used to see a rabbit while out walking, she'd lunge and yodel frantically at it.

If I were a compulsive trainer, I would jerk her leash, yell at her, or hold her on the ground when she did this. However, as a positive reinforcement trainer, my reactions are a bit different.

Instead of getting angry at her, I start to back away from the rabbit. The more she lunges and yodels, the further away from the rabbit she gets. It's the opposite of what Trout wants, and after awhile she turns back to me in frustration. Yes! This is exactly what I want. I click my clicker to tell her she made the right choice, and reward her by beginning to walk towards the rabbit again. If she lunges or yodels again, I once again back up.

Over time, this teaches Trout that lunging and yodeling result in the opposite of what she really wants, but paying attention to me and walking politely get her closer to the neighborhood rabbits. Without ever having to raise my voice or jerk the leash, I've gone from having a noisy, difficult-to-walk dog to one who understands that the appearance of rabbits means she should walk extra politely. 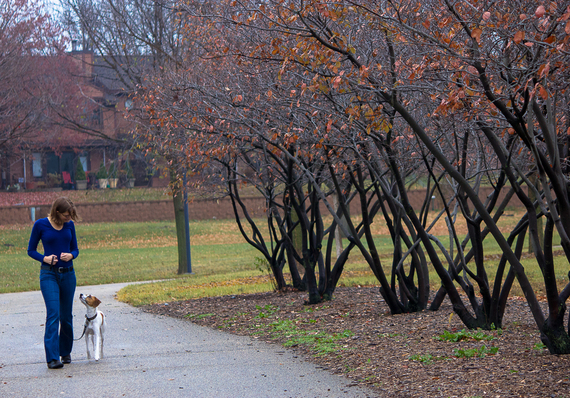 As you can see, the difference between compulsive and reward-based training has to do with the learning environment we set up for dogs. In compulsive training, your dog is set up to fail, then corrected for it. The dog learns avoidance behaviors that keep him from going out of line. This can be quite effective for some dogs, but can also be risky since dogs don't always make the associations we want them to make. Your dog might understand that you jerked on his collar because he growled at a child. In that case, the problem will be solved! He'll learn that he shouldn't growl at children. However, he might instead learn that unpleasant things happen when children are around, increasing the risk that he'll growl or snap at children next time he sees them. And even if he learns not to growl, that doesn't mean he won't still feel just as uncomfortable with kids in the future. While he may not growl in future interactions, this discomfort could cause him to lunge or snap instead.

In contrast, clicker trainers set the dog up for success. We do this through the clever use of management (just as I did by keeping Trout on leash when we walked). Then, we teach the dog what we want him to do in place of the problem behavior (in Trout's case, walking politely).

Consider this: if your dog is misbehaving, he either doesn't understand what's expected of him, hasn't been adequately trained, or has been put in a situation that's too difficult for his current level of understanding. Whichever of these reasons has caused his misbehavior, it's not his fault. If your dog is failing, it's because you have failed him, not because he's failing you. Regardless of the reason, correcting him shifts the blame from where it needs to rest: squarely on your shoulders. We as humans are the ones with the opposable thumbs and highly developed frontal cortexes. We should be able to figure out how to set our dogs up for success.

That doesn't mean I'm advocating letting your dog engage in misbehavior. I didn't let Trout continue lunging and yodeling at rabbits, and you shouldn't let your dog continue to be naughty either. Remember, practice makes perfect!

If you made a training mistake and your dog is engaging in unwanted or dangerous behavior, by all means interrupt it! Stop the behavior using the most gentle and neutral technique possible (with the understanding that sometimes a truly dangerous behavior may need to be interrupted with something more aversive), then go back and evaluate your training and management plans so it doesn't happen again. If your dog is bolting for the road, go ahead and tackle him. If your puppy's about to grab a steak knife off the counter, make a loud noise. Just remember: Once is a mistake. Twice is a pattern. Three times is inexcusable. Your dog just told you that you made a mistake with your training plan. Don't let it happen again.

Clicker training has been proven to be effective at training more reliable, more complex behaviors than compulsive training, all without the use of punitive techniques that hurt or scare dogs. This doesn't happen if the animal being trained is allowed to run amok though, and trainers who overface their dogs by putting them in situations where they fail will not ultimately be as successful as those who carefully manage their dog's environment in the early stages of training to set them up for success. Skilled positive reinforcement trainers are fair, kind, and realistic. They know to help their dog win.

Once your dog is well managed, the magic of training can begin. Teach your dog what you want him to do in all of the situations where he's currently struggling. Use appropriate rewards to show him what behavior is best. Just as Trout learned to walk nicely on leash when she saw rabbits, your dog can learn to behave in tough situations as well.

What situations have you found where you were too permissive with your dog, and how did that impact your training? Please comment below!