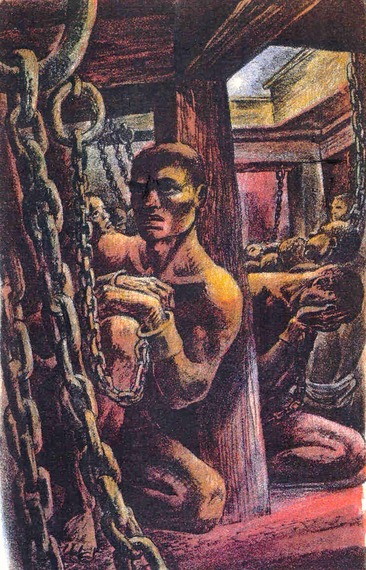 In the first place, the Portuguese initiated what eventually became the Trans-Atlantic slave trade mainly through slave raids along the coasts of Africa. The first of these raids came in 1444 and was led by Lançarote de Freitas. The problem with raiding for slaves was that it was extremely dangerous. For instance, the slave trader Nuno Tristão was killed during an ambush. Slave raiding proved to be an extremely dangerous way to obtain slaves, but buying slaves was much safer and took less effort on the part of the Europeans. Therefore, the first phase of the slave trade began not with a trade, but with a series of raids. This point is especially important because although the slave trade was on some levels based on a partnership between European buyers and African traders, the slave trade did not begin as such.

Moreover, the partnership between the traders and buyers was an uneasy one. The European slave traders often betrayed those who supplied them with slaves. A famous case of this was the African slave trader Daaga who was tricked and captured by slave traders. He was taken to Trinidad where he would eventually lead a mutiny. Another example is given by Anne Bailey in her book African Voices in the Atlantic Slave Trade. She mentions the story of Chief Ndorkutsu who had been providing captives to the European traders. Eventually some of the Ndorkutsu's own relatives were tricked into boarding a slave ship and then taken as slaves to Cuba. In some cases, such as that of Madam Tinubu in Nigeria and Afonso of the Kongo Kingdom, those Africans that initially gave African captives to the Europeans came to resist the slave trade. Tinubu had a change of heart when she realized how inhumanely the slaves were treated. Afonso was almost assassinated by the Portuguese after he demanded an end to the slave trade in his kingdom.

Typically wars in West Africa were relatively short affairs that left a small number of causalities. The introduction of European weapons made these wars more drawn out and destructive affairs. Moreover, the only way Africans could acquire these firearms was through the trade of slaves. A king of Dahomey once requested that Europeans establish a firearms factory in his nation, but this request went ignored. Firearms became necessary for African nations to defend themselves both from African rivals as well as from European intrusion, but the only way to acquire these weapons was through the slave trade. This situation only benefited the competing European powers that were able to play Africans against each other.

Finally, the slave trade left a negative legacy on both sides of the Atlantic. The Africans that were brought to the Americas were forced to labor as slaves, while enduring some of the most inhumane treatment imaginable. Those who remained, however, were left to mourn the lost of their friends and relatives that were taken away. A handful of African traders and rulers may have gained some wealth from the slave trade, but overall it was a very negative event for Africa. There were African kingdoms, such as the Kongo Kingdom, that eventually fell due to the onslaught brought about by the slave trade. We often think of the negative impact that the slave trade had on those who were captured, but the slave trade was also devastating for those who escaped being captured as well.

Some Africans did play a role in the slave trade and the trade could not have been as large as it was without cooperation from Africans. With that being said, I think many people who have not properly studied the slave trade have a tendency to overstate how involved Africans were in a misguided attempt to shift the blame of the slave trade on Africans.