I'm going to start off with an admission. I wasn't always a pit bull fan. Far from it, in fact. I believed the hype. I bought into the stereotypes. I worked a job where I went into many different homes everyday, and I encountered many dogs that would be classified as pit bulls that were, shall we say, less than model canine citizens. All of that changed when my wife and I adopted our first pit bull, Karma. Karma not only changed my mind about this breed, but in the very short time she was on this planet, she changed many other minds as well. I've been advocating for the breed ever since. These dogs are amazing, and deserve to live a life free of discrimination, just like any other dog.

Being the president of Bikers Against BSL, and a responsible pit bull parent, I get asked a lot of questions when our group is out advocating for breed neutral legislation. There are a lot of uphill battles that pit bull parents face on a daily basis. In an effort to help educate, I've put together this little list of the most commonly asked questions, and my answers to them.

Answer: No. There have been scientific studies that have proven a pit bull's jaw is no different than any other dog. Don't believe me? I have proof: According to Dr. I. Lehr Brisbin, Ph.D., a researcher at the University of Georgia,

"The few studies which have been conducted of the structure of the skulls, mandibles, and teeth of [American Pit Bull Terriers] show that, in proportion to their size, their jaw structure and thus its inferred functional morphology, is no different than that of any [other] breed of dog. There is absolutely no evidence for the existence of any kind of 'locking mechanism' unique to the structure of the jaw and/or teeth of the American Pit Bull Terrier."

On top of that, let's examine the absurdity of this claim. If a dog, of any breed, had a locking jaw, that dog would be unable to eat, drink, or pant. This condition would kill said dog. If all pit bulls had locking jaws, then pit bulls would cease to exist on this planet.

Question 2: Aren't pit bulls the only dogs to bite, hold, and shake?

Answer: Not even close. Instead of trying to explain the drive behind this behavior, I will simply refer you to the following videos of dogs that could never be confused with pit bulls.

You get the point.

Question 3: I heard that pit bulls have the strongest bite force of any dog. Is that true?

Answer: No. I've seen numbers from certain groups that range from 800 PSI, to well over 2000 PSI. First off, bite force isn't measured in PSI. The correct scientific measurement is Newtons (or pounds of force for us non metric folks) but when have the hate mongers ever let science get in their way before?

Moving on from that, there was only one study I could find that actually measured bite force (in pounds of force). It was conducted by Dr. Brady Barr of National Geographic. He used a Rottweiler, a German Shepherd, and an American Pit Bull Terrier. The results were as follows:

Question 4: Aren't pit bulls the most likely dog to bite?

Answer: Far from it. According to the American Temperament Test Society, in 2013 (latest info on their website), 86.8% of American Pit Bull Terriers passed their tests that involve stability, aggressiveness, friendliness, and protectiveness. Only 85.2% of Golden Retrievers passed, and only 69.8% of Chihuahuas passed.

This covers the average person's questions and misconceptions about pit bulls. However, the problem doesn't just stop with them. Even advocates for these dogs contribute to misconception, misinformation, and, to use a terrible pun, are barking up the wrong tree when it comes to advocating.

Advocate Misconception 1: The only pit bull is the American Pit Bull Terrier. If everyone just called these other dogs mutts, the statistics would go down.

Truth: Where do I even begin here? I see this argument at least once a week. First off, let's talk about these statistics these folks mention. There is only one group still using perceived dog breed in bite statistics. This group is run by an amateur statistician, and his research (I use that term very loosely) is often touted as irrefutable proof of the plague of pit bulls by the media. The Centers for Disease Control and Prevention (you know, that government agency that does studies about everything) stopped keeping track of dog bite fatalities by breed, and has posted the following statement on their website,

"Because of difficulties inherent in determining a dog's breed with certainty, enforcement of breed-specific ordinances raises constitutional and practical issues. Fatal attacks represent a small proportion of dog bite injuries to humans and, therefore, should not be the primary factor driving public policy concerning dangerous dogs. Many practical alternatives to breed-specific ordinances exist and hold promise for prevention of dog bites."

When nobody is using breed as a determining factor except an unqualified, self-proclaimed statistician who refuses to allow anyone to see his research , and who admittedly pulls his information from media reports, why do we care what his stats say? How does correctly classifying one dog as a mutt vs. a pit bull (notice I always use lower case unless referring to the APBT) help in this situation?

Let's look at the flip side of this. Let's say that we magically get everyone to classify correctly overnight (never going to happen, see Kleenex vs. tissue for example), what does that do for Breed Specific Legislation? Now we have mutts biting people. Lawmakers that are quick to knee-jerk reactions, and look for Band-Aids instead of viable solutions are going to ban mutts. You're cool with that? Seriously? You have to look at the broader picture. This isn't just about pit bulls, it's about discrimination. It's about us blaming the wrong end of the leash. No dog, regardless of breed, should be discriminated against because of ignorance, fear, and lack of addressing the real issue.

Advocate Misconception 2: It's all in how you raise them.

Truth: My god, no. Please stop with this. You may think you're helping, but what you're actually doing is condemning millions of dogs to death with that statement. If it were all in how you raise a dog, how do you explain the Vick dogs? How do you explain dogs that were the victims of terrible abuse, and neglect? With the right owner, almost any dog can be a well-adjusted, well-balanced canine citizen.

Truth: This one is a tough call. I think, instead of advocates arguing this point back and forth between ourselves, we should all agree that each dog is unique, regardless of breed. What we are looking for is equality. To say that pit bulls are just like any other dog is to deny the things that make pit bulls unique. Their intelligence, their tenacity, their goofball nature, their desire to please, and their tendency to pile on top of each other into the most adorable thing you've ever seen. 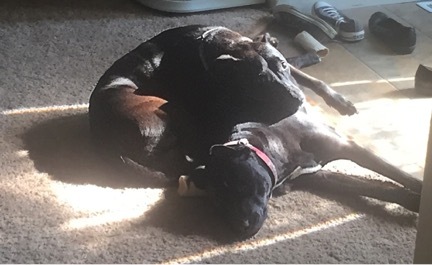 Conversely, to say they're not like other dogs only perpetuates the misconceptions of the general public. Each dog is an individual, and should be regarded as such. If you can't get on my bus with this, then let's just all agree that pit bulls are amazing dogs that deserve a fair shot at happy, discrimination-free lives.

In closing, I have a question for all of you. Should we then ban everything that has the potential to harm?

There are many people that are quick to judge, and offer the solution that banning pit bulls will make the issue of dangerous dogs disappear. Let's look at things from a different point of view. In 2013, 10,076 people were killed in alcohol-impaired driving crashes, accounting for nearly one-third (31%) of all traffic-related deaths in the United States. This is a staggeringly tragic number. By comparison, in 2013, 31 people were killed in dog bite related fatalities.

When a person is killed by an alcohol-impaired driver, the driver of the car is held responsible for that action, not the alcohol itself, or the vehicle they were driving. If we were take the position that things with the potential to be deadly should be banned, in this situation all motorized vehicles would be banned, as well as all alcohol. I understand that this is what is known as the Slippery Slope Logical Fallacy, but it illustrates the absurdity of Breed Specific Legislation. The logical, ethical and moral way to handle dangerous dogs is to place the responsibility back into the hands of the owners. Breed Neutral Legislation does just that.

I hope these questions and answers have cleared things up for those not familiar with the physiology and temperament of the pit bull. I hope other advocates reading this reconsider their stance on these points. I also hope that, one day, I'll be able to shut down Bikers Against BSL permanently because dogs are no longer being discriminated against based off their appearance and misconceptions about them. If you have any further questions, feel free to contact me on our Facebook page.