Passover began on Monday, and DeMille's "The Ten Commandments" will air this Sunday, as it does every year on Easter. It's thus an auspicious time to reflect again on the mysterious life of Moses.

From antiquity to modernity, from East to West, this biblical figure has inspired an array of fantastic legends. And he continues to exercise our collective imagination.

Yet, who was Moses and where did he come from? The question is an ancient one, likely as old as Moses himself. The biblical authors couldn't easily evade it. By examining their ingenious responses, we can catch a glimpse of how they often radically reinterpreted earlier traditions. 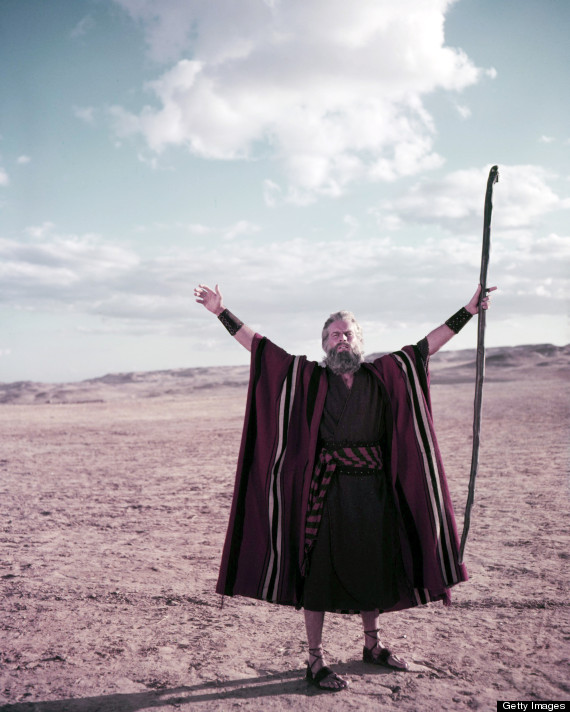 Moses' birth is portrayed in the first two chapters of Exodus. Chapter one reports that Pharaoh sought the death of all Hebrew male infants -- first by commanding the Hebrew midwives to slay the children at birth, and later by decreeing that the boys be thrown into the Nile. Chapter two depicts Moses' birth. The biblical authors of course want us to understand the second chapter in light of the first. Thus Moses' mother hides him for three months because she feared that he would be killed.

Yet at several points our account resists this sequential reading. We are told that Moses' mother hid him because "she saw that he was a beautiful child." Nothing is said here about Pharaoh's decree to slay all Hebrew male children. The narrator reveals that the infant was easy to identify as a Hebrew, but fails to mention a special dispensation that exempted him from the edict of death. The only thing we are told is that Pharaoh's daughter casually offered to pay Moses' mother to be his nurse.

The second chapter also has its own internal logic, and one need not have read the preceding chapter in order to make sense of it. The story responds to what must have been for many a vexing question: Why does Israel's great leader have an Egyptian name? In response to this question, the authors use narrative to argue that Moses was in fact not an Egyptian, but rather a full-fledged "member of the tribe." Not only that, they affirm that his parents belonged to the venerable Levitical clan. He thus had good yichus (pedigree) to go along with his zechut (merit).

To explain how Moses bears an Egyptian name and lived at the Egyptian court, the authors spin a clever tale: Moses was born to Israelite parents, yet he was abandoned by his mother and later found by Pharaoh's daughter.

Their story suggests that the relations between his parents were in some way illicit. We're not told the name of his father, as we would expect in biblical birth stories. He also disappears from the narrative as soon as Moses' mother conceives. Later we learn that this woman already has an older daughter. Instead of immediately abandoning the infant, she sees that "he was beautiful" and decides to keep him for as long as she can. (The apologetic intention is obvious here.)

Infant exposure is a recurring motif in the legends of great leaders. In fact, scholars have often suggested that the account of Moses' birth alludes specifically to the legend of Sargon the Great. Drawing on the foundling motif, the biblical authors tell, in fairytale fashion, how Moses' mother held on to the beautiful child for three months before eventually abandoning him, and that the most privileged young woman in the land later discovered him when she went with her maidens to bathe in the Nile. Thanks to the ingenious suggestion of his sister, Moses grows up in the home of his biological mother.

It was only later, this account contends, that Pharaoh's daughter "made him her son." It was also then that she gave him the the name "Moses." The name was a very popular one in ancient Egypt; it means "born of" or "child of," and was always combined with the name of a deity, like Thut-mosis or Ah-mosis. The biblical authors however claim that the name is actually Hebrew ("for I drew him out of the water")!

Implying that the princess discovered Moses when she was still a virgin, the narrator dispels any doubt that she could be his natural mother. And although Moses later went to live at the Egyptian court, he remained a Hebrew and proved his undying solidarity when one day he slew an Egyptian whom he found beating his kinsman.

But who really was Moses? The question is difficult to answer. He may actually have been a Levite, as the authors of this account aver. Or he may have been an Egyptian, as their opponents claimed and as his name suggests. (Sigmund Freud and many others before him embraced this view.) Or he may have been neither. Whatever the case may be, the biblical authors tell this new version of Moses' beginnings to counter and correct what was commonly thought about his origins.

Yet the new myth also raised its own set of troubling issues. Addressing concerns about Moses' identity, the explanatory tale casts an unbecoming light on his origins. The nation's founding father was a foundling? His own mother abandoned him? His father's identity is unknown? These assertions were disconcerting for many.

Once again, a group of authors responded to concerns about Moses' origins by composing a new text that supplements and corrects the earlier story. This time the text is just a brief preface (a portion of chapter one), yet it radically reinterprets the tale that follows. Now the reason why Moses' mother hides him is because she feared Pharaoh's soldiers. Instead of abandoning him at the riverbank, she cleverly subverts the king's order to cast all male children into the Nile. By describing the Hebrew midwives' deceptive maneuvers, the preface encourages the reader to interpret the actions of the other women -- Moses' sister and Pharaoh's daughter -- as deeds of daring defiance. What was once a light and delightful story is now a tale of terror.

The composition of these chapters bears directly on a central debate in current biblical scholarship. Some scholars still attempt to isolate several independent sources, or "documents," that cut across these two chapters of Exodus and the rest of the Pentateuch. Yet in insisting that the authors wrote in isolation from one another, these "documentarians" fail to appreciate the evidence for a vigorous and polemical back-and-forth. A different approach has emerged over the past decades. Its practitioners draw attention to the way the Bible evolved through successive stage of supplementation. Such is precisely what we witness in these two chapters from Exodus.

Yet what's more important than academic debates between documentarians and supplementarians is the way in which central texts in the biblical tradition emerged in the course of a vibrant exchange and evolved over time. In the case of our texts, what drives this evolution is a concern with the identity and origins of the nation's august leader. Yet in contrast to past assaults on the American president's identity, the biblical authors shared a desire to honor the name of one who toiled so hard for the welfare of his people.