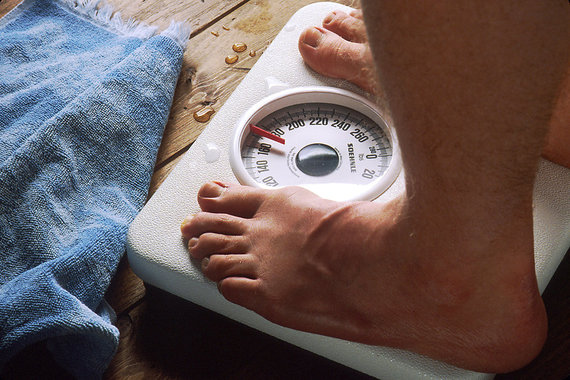 "I look so fat in this dress," the teenage girl loudly proclaims as she scans her body in the department store mirror. "You don't look fat at all! That dress is beautiful on you," her mother exclaims. The common impulse when someone declares that they "look fat," is to assure them that they do not appear fat in any way. However, this reaction to a declaration of "I look fat," only serves to perpetuate weight stigma that has unfortunately become far too prevalent in our culture. Weight bias is commonly defined as "negative attitudes toward a person because he or she is overweight or obese."

Many fat activists are trying to reclaim the word "fat" as a neural descriptor -- in the same way that we utilize words such as "tall" vs. "short." The problem is that in our culture the descriptor of "fat" has become synonymous with undesirable traits, such as being lazy, unattractive, and unhealthy. In honor of weight-stigma awareness week, the following are three common myths about "overweight" individuals debunked.

1. People who are "overweight" are unhealthy.

Diet evangelists and "clean eating" enthusiasts often promote the thin ideal standard of beauty with an almost religious fervor. People often try to rationalize their discriminatory viewpoints towards fat individuals under the guise of promoting health and well-being.

The reality is that you can be considered "overweight" according to body mass index (BMI) and still be healthy. You can also be "thin" and be unhealthy. In fact, research suggests that a person's weight is simply not a good barometer of their overall health.

According to an article in The Nutrition Journal by Dr. Linda Bacon and Lucy Aphramor:

"Most epidemiological studies find that people who are overweight or moderately obese live at least as long as normal weight people, and often longer."

Further, numerous studies have found that "obesity is associated with longer survival in many diseases. For example,"obese persons with Type 2 diabetes, hypertension, cardiovascular disease, and chronic kidney disease, all have greater longevity than thinner people with these conditions."

In our society, one's weight has become inextricably linked to one's health. However, a person can improve their health markers through adopting healthy habits, regardless of their weight. For instance, research shows that "lifestyle changes can reduce blood pressure, largely or completely independent of changes in body weight. The same can be said for blood lipids. Improvements in insulin sensitivity and blood lipids as a result of aerobic exercise training have been documented even in individuals who gained body fat during the intervention."

2. People who are "overweight" lack willpower.

You cannot assume anything about a person's personality or characteristics based upon their weight. Further, all bodies are not meant to look exactly the same. Set-point theory holds that if we eat according to our hunger cues, our bodies will naturally regulate at a healthy weight range. This healthy weight range varies from person to person. Some people might naturally have a higher set point than others. In addition, even if you are above your set point range, it does not mean that you lack will power.

We all know chronic dieters who often feel that they have "failed" at their diets due to a perceived lack of willpower. Dieting and food restriction often naturally leads to emotional and binge eating. This makes complete sense from an evolutionary standpoint. Lauren Muhlheim, a psychologist, exemplified this point when she stated:

"Our bodies evolved in an environment in which food was relatively scarce. To survive in such an environment, our bodies had to prioritize the consumption of food above other activities. If our food supply was less secure, we learned to stock up on food when we could ... Bingeing was not a matter of poor willpower, but a perfectly normal and healthy body response to starvation."

Further, just because someone is classified as overweight or obese does not mean that they struggle with binge or emotional eating. In addition, many studies indicate that BMI -- which is used to classify people as overweight or obese -- is misleading and flawed. You simply cannot make an accurate judgment about a person's eating habits, based solely upon their weight.

3. People who are "overweight" are unattractive.

Our society currently places a value on the "thin ideal" standard of beauty, however beauty standards have fluctuated over the past few decades in the US.

Further, in some cultures larger bodies are praised and seen as more beautiful than smaller bodies. For instance, in Nigeria there is a business thats sole purpose is to help individuals gain weight. In addition, "in the island nation of Tonga, 90 percent of the population is overweight, which is considered a status symbol. In Cape Town, South Africa, two-thirds of teen girls perceive excess weight as a sign of happiness and wealth."

The thin ideal standard of beauty is merely a social construct that is perpetuated by the media and individuals in our culture. If you need further evidence that you can be beautiful at any size, I would urge you to check out the following women who are defying the thin ideal standard of beauty: Ashley Graham, Tess Holiday, Saffi Karina, Jennie Runk, Gabi Gregg, and Nadia Aboulhosn.

Finally, it is largely seen as unacceptable in America to discriminate against people on the basis of race, gender, and social class. So why is it that discriminating against people due to their weight and making fat-phobic comments, is often seen as socially-acceptable? The next time you hear someone make a "fat joke" or discriminatory remark, I urge you to speak up and say something. After all, a number on a scale should never be used to measure a person's worth or value.

More:
healthy livingweight discrimination health at every sizeWellness
Newsletter Sign Up
An essential daily guide to achieving the good life
Subscribe to our lifestyle email.
Successfully Subscribed!
Realness delivered to your inbox