A Virginia man was sentenced to life in prison last Thursday for raping and murdering a Muslim teenager who was walking to her mosque for a Ramadan service.

Darwin Martinez-Torres, 25, was given eight life terms without the possibility of parole for the June 2017 murder of Nabra Hassanen, a 17-year-old high school sophomore from Reston. The killer pleaded guilty last year in a deal that took the death penalty off the table, the Associated Press reports.

Fairfax County prosecutors said the attack began when Hassanen was walking with a group of friends to the All Dulles Area Muslim Society (ADAMS) mosque in Sterling to attend an early morning service. Martinez-Torres reportedly honked at one member of the group who was riding a bicycle in the road. When that teen yelled back, Martinez-Torres chased the group in his car and then on foot, wielding a baseball bat. The friends scattered but Hassanen wasn’t able to get away as fast as the others.

Martinez-Torres told police that “everything went out of control” after he caught Hassanen, The Washington Post reports. He admitted that he knocked the teen unconscious, pulled her into his car, drove to another location and sexually assaulted her. Her body was later found in a pond.

The murder, which occurred during Islam’s holy month of fasting, grabbed national headlines. Vigils for the teen were held in cities across the U.S. The incident also sparked fear among Muslim rights groups that Hassanen might have been targeted for her faith.

But prosecutors have long said the incident was motivated by “road rage.”

Martinez-Torres, a native of El Salvador, is an undocumented immigrant who entered the U.S. illegally, federal authorities say. His attorney argued that he is intellectually disabled due to exposure to neurotoxins from a mine near his childhood home in El Salvador, The Washington Post reports. The lawyer also said that Martinez-Torres had consumed a significant amount of alcohol and marijuana the night of the murder.

The plea deal carries an unusual requirement that Martinez-Torres answer any questions the victim’s family asks him over the next year. The questioning could occur in writing, The Washington Post reports.

Gadeir Abbas, an attorney for the Council on American-Islamic Relations and for Hassanen’s family, said that his clients plan to gather their own evidence from Martinez-Torres to determine if the murder was motivated by Islamophobia.

Abbas said that he believes Martinez-Torres received a punishment that reflected the severity of the crime.

Mohmoud Hassanen, the teen’s father, also attended the sentencing hearing. At the press conference, he said he doesn’t want anything like this to happen to any other family.

He added that he thinks of his daughter every day. 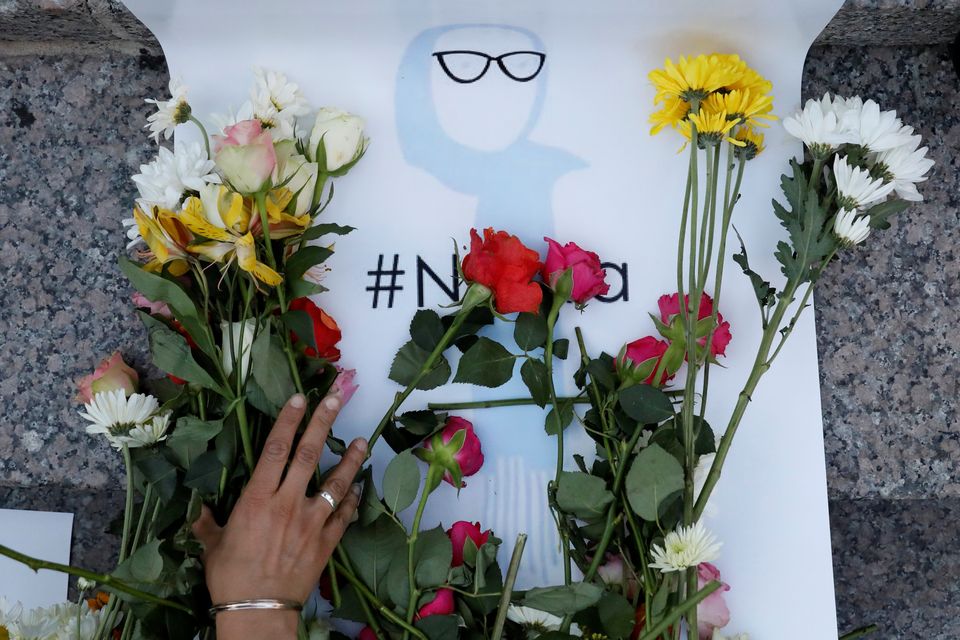 1 / 11
An attendee leaves flowers for Nabra Hassanen, a teenage Muslim girl killed by a bat-wielding motorist near a Virginia mosque, during a vigil in New York City on June 20, 2017.
Brendan McDermid / Reuters