We're all just looking for love, right? That and the occasional lost iPhone. This is what happens when those searches collide.

When Nadav Nirenberg lost his iPhone in the back of a cab on New Year's Eve, the 27-year-old Brooklyn musician called it multiple times, hoping to recover the device. Despite leaving messages promising a reward, it became clear his phone was in the hands of someone with no intention of giving it back.

Worse, Nirenberg soon realized the thief had logged into his dating profile on OKCupid, and was hitting on women. "Not only is he stealing my phone," Nirenberg recalled of the thief in a post on his blog, "he's creepy and disturbing."

So he decided to catch the thief using the power of seduction. Nirenberg created a fake OKCupid account pretending to be "Jennifer," a 24-year-old woman who had recently moved to the area and was looking for love.

"Jennifer" struck up an online conversation with the thief -- "I used lots of winks and smiley faces so I would seem like a girl," Nirenberg told the New York Post -- and after a couple hours of online flirting, suggested they meet for a glass of wine. Lest you doubt the sheer quantity of flirting, here's a screenshot of "Jennifer's" email inbox. The thief's screen name is "SamIAmnt."

Nirenberg directed the thief to his apartment for a 7:00 p.m. rendezvous, where the punctual criminal soon appeared, “clean-shaven, doused in cologne and holding a bottle of wine.

"He was ready for a date,” Nirenberg told the Post. But that changed quickly when Nirenberg, armed with a large hammer, tapped the thief on the shoulder, handed him $20 as a peace offering and asked for his phone back.

Nirenberg described the man as a "small Indian dude," and said he thinks he was the New Year's Eve cab driver. After handing over the phone, the thief hurried off in shame, but not before Nirenberg told him, "You smell great, though."

Nirenberg has since updated his online dating profile with an acknowledgment: "Sorry if you've received weird messages from this account." He told the Huffington Post he plans to delete the account in the near future. 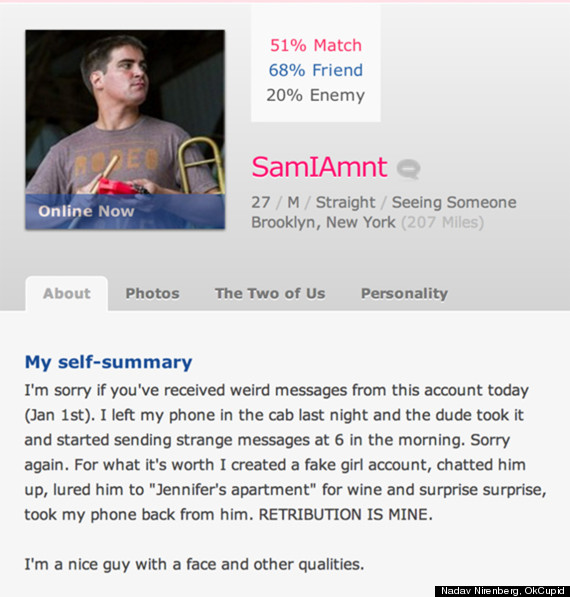