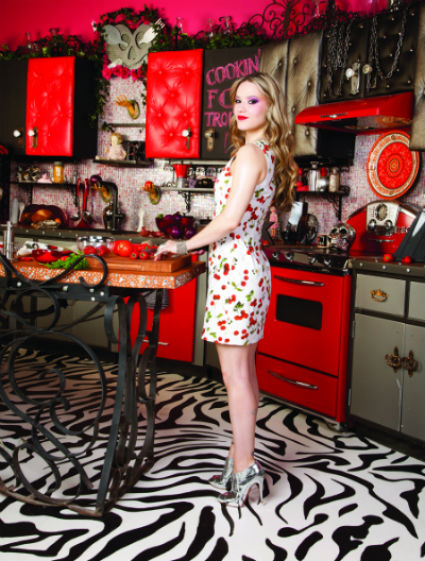 While wearing stilettos and cooking up a feast in a kitchen decorated with decapitated dolls, television chef Nadia G. has won the hearts of not just foodies but those whose idea of cooking is microwaving a doggie bag from the night before. Her Italian sass and bitchin' attitude is addicting. In fact, she recently received Logo's NewNow Next Award for "Most Addictive Reality Star."

Life for 31-year-old Nadia G., born Nadia Giosia, couldn't be better. A native of Montreal, her show Bitchin Kitchen has helped change stereotypes of those who love spending time in the kitchen. She's often referred to as the Julia Child of the Net generation. It all began almost a decade ago when she was running her own boutique 2.0 design/branding studio and felt something was missing. It occurred to her that what she needed was some food. In 2007 Bitchin' Kitchen debuted on the Internet and gained the attention of broadcast media. Three years later the show premiered on the Food Network in Canada and the Cooking Channel in America.

Nadia G. says her secret ingredients in her kitchen are fearlessness, patience, creativity, and love. But don't let her tattoos, her abs of steel, or her enthusiasm for playing with knives fool you. Nadia G. is a woman who carries her family with her in all she does and loves to laugh.

What did winning the NewNow Next Award for Most Addictive Reality Star mean to you?

It was a huge honor. I was certain I was going to lose to Willam [RuPaul's Drag Race], who is so fantastic. I was truly surprised when I won. I'm really happy that the LGBT community is so into Bitchin' Kitchen, because the show is all about expressing oneself in and out of the kitchen and not being afraid to be who you are -- and looking fabulous while you're doing it. It really warms my heart that they love me as much as I love them.

Besides food, what are you addicted to?

Hmm... I'm, like, going through the Rolodex and going, "Acceptable? Not acceptable?"

What song do you bust out when you do karaoke?

I love singing "What's Going On" from 4 Non Blondes.

Why do you think the LGBT community has gravitated to you?

On Bitchin' Kitchen -- pardon the cheesy pun -- we lay it all out on the table. We talk about real things and have a couple of laughs about it. There's also a lot of fun and fantastic fashion in the show. We have a great time with that. The LGBT community is definitely... well, it's hard to generalize like this, but they love fashion. Between the shoes, the great food, and the off-kilter sense of humor, it just works.

A segment on your show is called "Nadvice." We need a little. What dish would you recommend for a gay wedding?

Oooh, there are so many wonderful things. One could make -- gay or not gay -- burrata. It's an amazing cheese. You could make that with some caramelized onion and fig jam.

That sounds like one fattening meal for a wedding!

Well, that would be an appetizer. You wouldn't want to eat a bunch of burrata! That would really kill the party.

OK, for a main dish?

I'm a big fan of steak. You could make a gorgeous steak with a maple balsamic reduction. You've got the sweetness from the maple syrup and the tanginess from the balsamic.

You said you studied at the school of Hard Wooden Spoons Whacks. Tell us about that place.

Not too many people went to that school. I grew up in a food-obsessed Italian family, so I learned to cook from my mom and my grandma. They also taught me a lot more than just cooking. The kitchen was where everything went down.

Since your show is all about attitude and being fabulous, what advice would you give to others on how to live a wonderful life?

First and foremost, you've got to make yourself happy. Essentially being who you are is the most important thing. When you're after truth, happiness always comes.

Speaking of the truth, how much of who we see on camera is the real you?

A lot of it. I write the show, so I distill my thoughts in the writing process. Bitchin' Kitchen is my stage, so there is definitely performance going on, but a lot of me is in the show. I guess what isn't in the show is me sitting around in joggers writing this stuff.

You mentioned your grandmother earlier. Tell us about her.

You love The Golden Girls.

Which Golden Girl are you?

You got your first tattoo when you were 13. How many do you currently have?

I have 10 now. The latest one I got was the word "hungry" on left forearm. It's like a really deep metaphor. [Laughs.] The fun thing, though, is when I wear a three-quarter sleeve, it says "hung." That was a surprise to me! I love this new tattoo. I think it's very descriptive of my personality. It feels like it should've always been there.

In a man you love manly hands and a fearless personality. Are you currently in love?

Oh, man. Am I in love? I'm in love with chocolate.

Oh, OK. You can be coy. Let's talk about Martha Stewart. You once said, "She legitimized homemaking for a generation, but when it comes to the next generation, they're not really looking to fold napkins into swans or color-code their linen closets." What are your thoughts on the "next generation"?

We got Martha Stewart legitimizing homemaking for her generation, and then there's this return to being interested in all things home, lifestyle, and food again. I think this generation is less about the frills and more about the flavor of things. Just because one likes to cook up a great meal or decorate their home doesn't mean they have to do it with granite counter tops and duck à l'orange.

You just seem to keep going. What is your philosophy for life?

It comes back to the tattoo. I'm a very hungry person, and I think if you have enough hunger, you'll figure out how to get full.