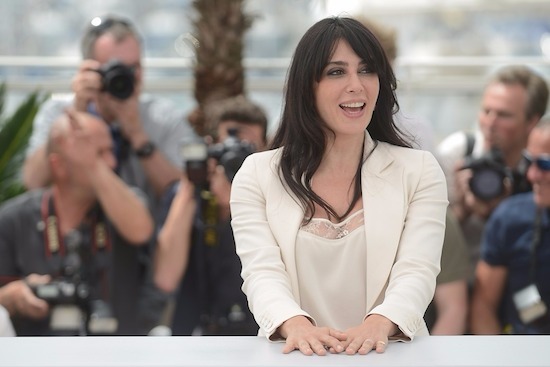 If there is one film that changed my life, it's Nadine Labaki's Caramel. It is the kind of movie I can watch again and again, and still find hidden within it new gems of wisdom and insights. If you've ever asked me what to watch as your first Arab film, I'm sure you remember my answer as being, without hesitation, Caramel.

Then came Where Do We Go Now? Another masterpiece by Labaki, who courageously tried out a new concept of incorporating music as a character, in a film that deals with serious themes. Women who find a way of solving the religious conflict created by the men in their town, by switching faiths and hosting some Ukrainians. Brilliant.

So it's no surprise I was very eager to catch up with Labaki once again in Cannes, since I've not had the pleasure to interview her in a couple of years. I find filmmakers true trendsetters and look to them as prophets of things to come. But even more so when it comes to women filmmakers.

Sitting across from the beautiful, sultry-spoken Labaki in her white suit, while on a sunny lawn overlooking the Croisette was a welcomed luxury, a short holiday away from the hustle and bustle that is the biggest film festival in the world.

The question on everyone's mind, when is your next film coming out?

Nadine Labaki: I'm actually in the middle of writing my next film. You know, I've had a lot of opportunities to make other films and to work on other scripts but I feel the need to write my own things. That's why it takes so long for me between each film. Even though it's really tempting, I receive a lot of scripts from different people all over the world but if I want to be on that kind of an adventure, I'd rather do it as an actress than as a director, because it's a lot work. Making a film is like two or three years of my life and it needs to be really worth it. It needs to be something I feel the need to say. In the meantime, I've been acting here and there. I don't consider that I've played the part of my life, I'm still waiting for that one director who is really going to explore who I am.

Labaki: My favorite part of acting is actually experiencing different lives, living different lives. Maybe it's something that a lot of actors feel, that's why they act. It's a way of escaping your own personality and escaping the routine of you, of who you are. How you behave, how you talk, your voice, even your physical appearance, everything. It allows me to explore my different natures, because I truly believe that every one of us has different natures. And because of the pressure of society we tend to become just one and act the same way because otherwise we'll be labelled as crazy. So acting really allows me to do that, it's why I like it and why I'm always looking for that director who is going to see something I don't see, or see something that pushes me further away from my personality. It's the best job in the world, being an actor.

Directing allows me to create different realities, different stories and I think that cinema has a big mission. It has a higher mission than just telling a story or entertaining us. I truly believe in that mission.

I love you for saying that, because I believe cinema has a lot of power!

Labaki: It has so much power! For me it's one of the most powerful means of change and I am aware of that. I'm aware of this mission and I want to be clever enough to embrace it and take it as an opportunity for me to do something, to have an impact. So I give it a lot of responsibility which is why I take a lot of time between films because I really need to become obsessed with a theme.

For women it's like a cry for help, cinema. It's like you're shouting out loud something that you are feeling deep inside, it's not just about telling a story. It's about really expressing yourself and trying to make a change because everything needs to be changed, nothing is going the way it should be. I really believe in alternative thinking and an alternative society and a new way of exploring things, and through the opportunity of cinema I explore that.

Maybe cinema is true freedom for us women, even as an audience member, films like Caramel or Where Do We Go Now? are freedom. You watch them and you finally find women who express some of the things you may never be able to express.

Labaki: I agree, it's a lot of freedom. I mean, you can say these things over dinner, you can express yourself in that way. But first of all, who would listen to you? And second, I think it would be very limited. It would be maybe three people who would hear this talk and maybe one would listen and the other two would engage in other conversations. When you make a film about it, you are engaging all these people, at the same time, in one movie theater, on the same wavelength, listening to something that you have to say -- and that makes a lot of difference.

Martin Scorsese once said something about the audience being active participants, in a film, involved while sitting there in that dark theater. Watching a film is not a passive sport.

We live in this world where someone is invariably labelled "the Other". Is cinema a way for us to understand and appreciate other cultures?

Labaki: Absolutely. I've been exploring and experiencing that more and more. When I go to festivals and I'm on a jury, it's like a lesson in anthropology. You learn so much, about different cultures. Like a window to other cultures.

And what a jury you are on, this time around in Cannes!

Labaki: Yeah. First of all it's an honor to be with Isabella Rossellini, I admire her so much. This woman is for me the definition of grace. Of "délicatesse," of generosity, of intelligence. And everyone else, Tahar [Rahim], and to be with Haifaa [Al-Mansour], I'm learning about her more and more. And Panos Koutras. All of us are talking about films all day long.

If we hired filmmakers to be politicians we'd be so much better off, don't you think?

Labaki: I've always said that. Someone asked me one day, what would be your wish, if you had one wish? And I said I would switch politicians to artists. And I think the world would be so much better.

Photograph of Nadine Labaki courtesy of Ammar Abd Rabbo, all rights reserved and used with permission.