When the North American Free Trade Agreement was first signed in 1994, proponents said it would eventually create jobs for the U.S. economy.

17 years later, a new report estimates, the American worker only has hundreds of thousands of job losses to show for it.

According to a report by Economic Policy Institute economist Robert Scott, entitled "Heading South: U.S.-Mexico trade and job displacement after NAFTA," an estimated 682,900 U.S. jobs have been "lost or displaced" because of the agreement and the resulting trade deficit.

The historic agreement, signed just three years after the collapse of the Soviet Union, tore down trade barriers between the U.S., Canada and Mexico, making trade and investment easier for businesses without allowing for the cross-border movement of labor. Despite the agreement being considered a boon for Mexico, the country's economy grew only 1.6 percent per capita on average between 1992 and 2007, The New York Times reported in 2009.

The EPI's calculation of 682,900 jobs lost to NAFTA takes into account jobs created as a result, too. Last year, for example, U.S. exports to Mexico supported 791,900 jobs. It's just that those jobs created pale in comparison to the 1.47 million U.S. jobs that would be necessary without the imports resulting from NAFTA, the report found.

Still, the number of jobs lost to NAFTA looks minimal when placed against the havoc freaked by the financial crisis. Only in 2008, at the height of the crisis, the U.S. economy hemorrhaged 2.6 million jobs, according to CNNMoney.

Perhaps the most drastic switch post-NAFTA has been in the two country's trade deficit. In 1993, before the signing of NAFTA, the U.S. held a $1.6 billion trade surplus over their neighbor to the south, which supported 29,400 jobs. By 1997, the tides had turned, and Mexico laid claim to a much larger surplus of $16.6 billion. As of 2010, it's not even close. Mexico's trade surplus now hovers around $97.2 billion.

Jobs continue to be lost to NAFTA today. In the years 2007-2010, the U.S. economy has lost 116,400 as a result of the trade deficit created by NAFTA. And last year, the growth of Mexican auto exports to the United States alone created more Mexican jobs -- 30,400 -- than the entire U.S. auto industry.

It's the U.S. manufacturing sector that has suffered most mightily from NAFTA, alone accounting for 60.8 percent -- 415,000 total -- of the jobs lost to the agreement. Specifically, those making computer of electronic parts have accounted for 22 percent of all job losses, and motor vehicle and parts workers accounted for 15 percent of job losses.

Job losses haven't been limited to certain geographic regions, either, as all fifty states have lost jobs as a result. And while the states with the largest total number of job losses, California and Texas, do hug the southern border, it's actually manufacturing-heavy states to the north, such as Michigan, Indiana and Kentucky, that have lost the largest share of jobs to Mexico.

The below chart tracks jobs displaced as share of total state employment: 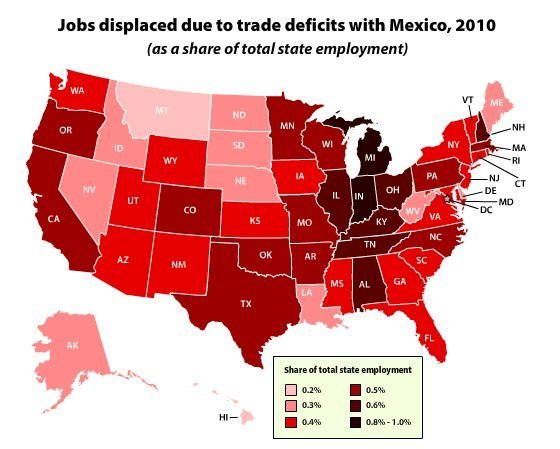