While driving in my car recently, I heard a commentator say that he speculated that China was not unhappy with a new Trump Administration, because they would not have to put up with a President Hillary Clinton who would "nag" them about human rights. Wow, just slip the sexist reference into a sentence dismissing human rights as a serious or relevant issue!

There it was. The first confirmation that part of the reason for Hillary's defeat is embedded in this commitment of hers. There were many complicated reasons for her "defeat." (She did win the popular vote). We live in a globalized world, whether we want to or not, and the only choice is what global forces will we encourage and abet. This was an underlying force in the election; what is at stake in our worldview.

Our apparent retro nationalist choice is really a choice to be able to align ourselves with nations and forces that will enrich some people in our country, without the bother, without the "nagging" about human rights. Male leaders of countries still plagued by human rights abuses can wink and nod with a man they know could care less. They will not have to deal with a "nagging b****" but with a with a white guy who gets them. 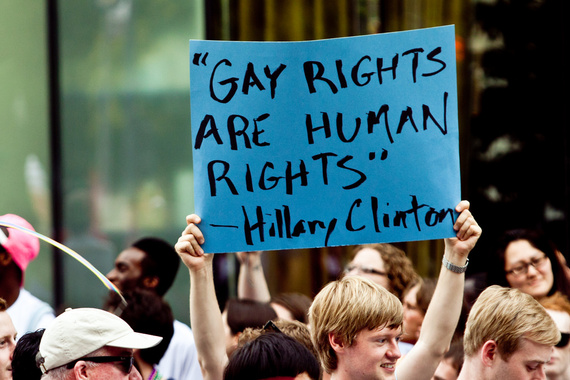 All global human rights organizations know that. I only hope, like the ACLU, they will be able to raise funds on the heels of this election, but it will be more difficult.

Elections have consequences, and those of us who have spent our lives working for human rights, know this painfully today.

The fate of millions of refugees will be negatively impacted by our politics. The progress in human rights in Africa, in so many places, will be impacted. Our own Justice Department will likely turn away from the focus on criminal justice reform, community policing, and holding municipalities accountable for policing practices instead of being a champion of human rights in our own country.

The State Department, which has not yet been contacted by the President-elect's transition team, must feel like "persona non grata" right now. That was Hillary's recent domain, and the President-elect does not think he needs them.

Several years ago, the U.S. Romanian Ambassador marched with LGBT people in the streets of Bucharest and invited the marchers to his home afterwards for a reception, letting the Romanian government know how committed we are to human rights. Will that be possible in a Trump State Department?

Climate change is, at its heart, a human rights issue. The poor are the most vulnerable in the devastating climate events to come. Even China is saying that if the U.S. withdraws from the Paris agreement, it will stay the course. But we are in for a Battle Royale about carbon, oil, and whether we can survive a setback in progress on climate change. And, the lives of all of us are at state. Even the U.S. Department of Defense, the Pentagon, say that dealing with climate change is critical for peace and security. Will that be of any consequence in a Trump Administration?

I have friends and family who I dearly love who voted for Trump, most of whom would never mention it to me, but I know. They did not think about any of this or the implications for members of Metropolitan Community Churches (MCC) in countries around the world whose lives just became less safe.

They did not think about how it would impact MCC churches in the United States, who have already experienced vandalism and harassment, swastikas and feces, with "MAGA" ("Make America Great Again") tagged onto the defacement.

These stories are just the beginning, the pre-cursors.

I trust that Democrats are right by hoping to play Republicans against each other and get an infrastructure bill passed so that rural, barely-middle class, and urban poor folks will have jobs. I also hope they are not being totally naïve about what will be cut in Speaker Paul Ryan's new budget to pay for it. I am not confident that they will be able to exploit that in a way that does not hurt more than it helps.

So, please, Hillary, you who won the popular vote by a now widening margin, do not give up. Do not stop being a nagging voice, the conscience of our nation on the topic of global human rights. We need you more than ever.

I am still with her.