The Kenyan army has tweeted that most hostages in the Nairobi mall standoff have been rescued and most of the complex secured, according to AFP:

Earlier, Kenya's Disaster Operations Centre tweeted that authorities would launch an operation to end the standoff on Sunday, saying, "This will end tonight. Our forces will prevail. Kenyans are standing firm against aggression, and we will win."

NAIROBI, Kenya (AP) — Kenyan's military said late Sunday it had rescued "most" of the remaining hostages held by al-Qaida-linked militants in an upscale Nairobi mall after launching a major operation to end a two-day standoff that had already killed 68 people.

The assault, which began shortly before sundown, came as two helicopters circled the mall, with one skimming very close to the roof. A loud explosion rang out, far larger than any previous grenade blast or gunfire volley.

Kenyan police said on Twitter that a "MAJOR" assault by had started to end the bloody siege.

"This will end tonight. Our forces will prevail. Kenyans are standing firm against aggression, and we will win," Kenya's National Disaster Operation Centre said on Twitter.

Kenya Defence Forces later said it had rescued most hostages and had taken control of most of the mall. Officials did not immediately release the number of hostages rescued or the number that remained. Four Kenyan military personnel were wounded in the operation, the military said.

The assault came about 30 hours after 10 to 15 al-Shabab extremists stormed the mall Saturday from two sides, throwing grenades and firing on civilians.

Loud exchanges of gunfire emanated from inside the four-story upscale mall throughout Sunday. Kenyan troops were seen carrying in at least two rocket propelled grenades. Al-Shabab militants reacted angrily to the helicopters on Twitter and warned that the Kenyan military action was endangering hostages.

Kenyan officials said they would do their utmost to save hostages' lives, but no officials could say precisely how many hostages were inside. Kenya's Red Cross said in a statement citing police that 49 people had been reported missing. Officials did not make an explicit link but that number could give an indication of the number of people held captive.

Kenya's Red Cross said the death toll on Sunday rose to 68 after nine bodies were recovered in a joint rescue mission.

Al-Shabab said on its new Twitter feed — after its previous one was shut down Saturday — that Kenyan officials were asking the hostage-takers to negotiate and offering incentives.

"We'll not negotiate with the Kenyan govt as long as its forces are invading our country, so reap the bitter fruits of your harvest," al-Shabab said in a tweet.

"We went as a nation into Somalia to help stabilize the country and most importantly to fight terror that had been unleashed on Kenya and the world," said Kenyatta. "We shall not relent on the war on terror."

He said although this violent attack had succeeded, the Kenyan security forces had "neutralized" many others. Earlier in the day Kenyatta said he his nephew and his nephew's fiance were killed in the attack.

Former Kenyan Prime Minister Raila Odinga told reporters at the mall that "quite a number" of people were being held hostage in two locations of the mall, which includes stores for Nike, Adidas and Bose. Many hostages were believed to be in a grocery and general department store called Nakumatt.

Kenyan security officials sought to reassure the families of hostages but implied that hostages could be killed. The security operation is "delicate" because Kenyan forces hoped to ensure the hostages are evacuated safely, said Interior Cabinet Secretary Joseph Lenku.

"The priority is to save as many lives as possible," Lenku said, adding that more than 1,000 people escaped the attack inside the mall on Saturday.

"We have received a lot of messages from friendly countries, but for now it remains our operation," Lenku said.

More than 175 people were injured in the attack, Lenku said, including many children. Kenyan forces were by Sunday in control of the mall's security cameras, he said.

Britain's prime minister, in confirming the deaths of three British nationals, told the country to "prepare ourselves for further bad news."

Westgate Mall is at least partially owned by Israelis, and reports circulated that Israeli commandos were on the ground to assist in the response. Four restaurants inside the mall are Israeli-run or owned.

In Israel, a senior defense official said there were no Israeli forces participating in an assault, but the official said it was possible that Israeli advisers were providing assistance. The official, speaking on condition of anonymity because he was discussing a classified military issue, would not elaborate.

Israel has close ties to Kenya going back many years. And in recent years, Israel has identified East Africa as an area of strategic interest and stepped up ties with Kenya and other neighboring countries, due to shared threats posed by al-Qaida and other extremist elements. In 2002, militants bombed an Israeli-owned luxury hotel near Mombasa, killing 13 people, and tried to shoot down an Israeli airliner at the same time.

Kenyans and foreigners were among those confirmed dead, including British, French, Canadians, Indians, a Ghanaian, a South African and a Chinese woman.

Kofi Awoonor, a Ghanaian poet, professor and former ambassador to Brazil, Cuba and the United Nations, died after being injured in the attack, Ghana's presidential office confirmed. Ghana's ministry of information said Awoonor's son was injured and is responding to treatment.

Kenya's presidential office said that one of the attackers was arrested on Saturday and died after suffering from bullet wounds.

The United Nations Security Council condemned the attacks and "expressed their solidarity with the people and Government of Kenya" in a statement.

There was some good news on Sunday, as Kenyan media reported that several people in hiding in the mall escaped to safety in the morning, suggesting that not everyone who was inside overnight was being held by al-Shabab.

Police lobbed multiple rounds of tear gas throughout the day to disperse hundreds of curious Kenyans who gathered near the mall. 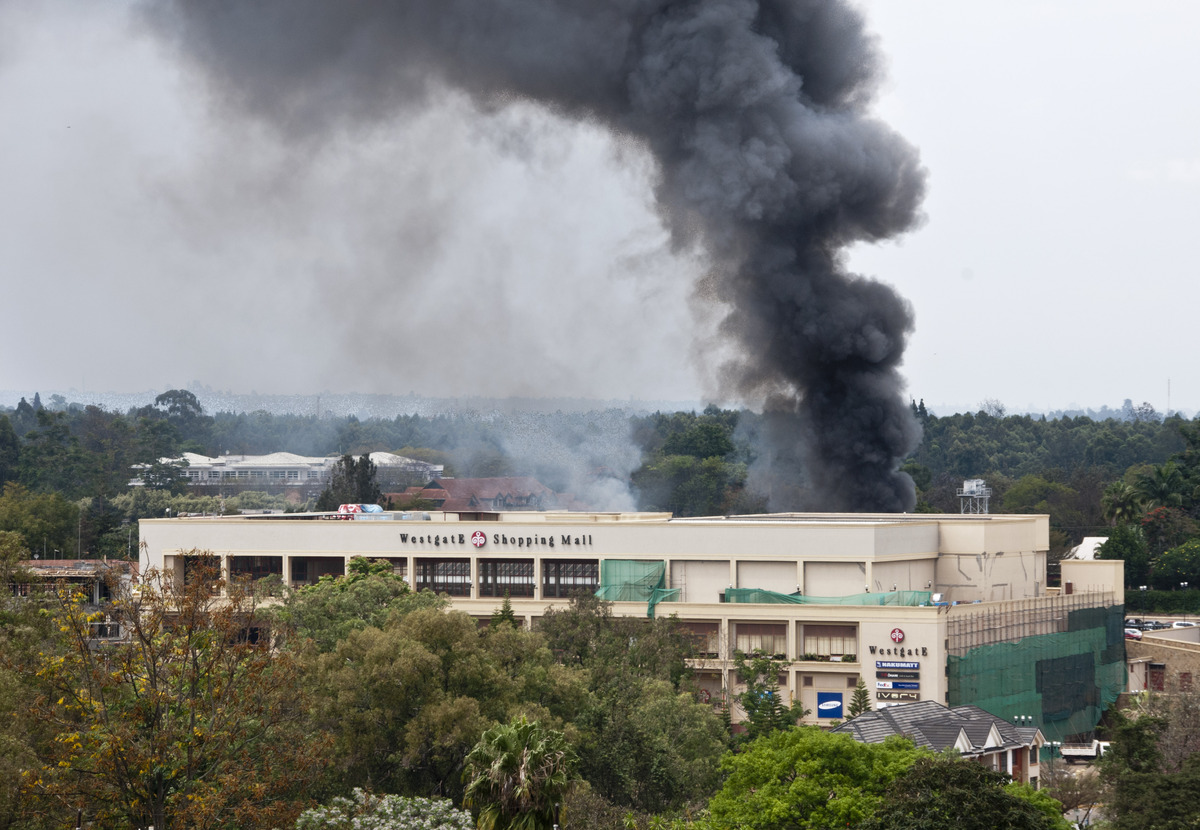