If you've never seen works by Los Angeles based artist, Charles Garabedian, let me warn you before you step into LA Louver Gallery to see his latest exhibition. Garabedian's paintings and drawings illustrate dramatic and painful moments of Greek mythology and Christianity. And most of his characters are naked, frightened and rather ugly. 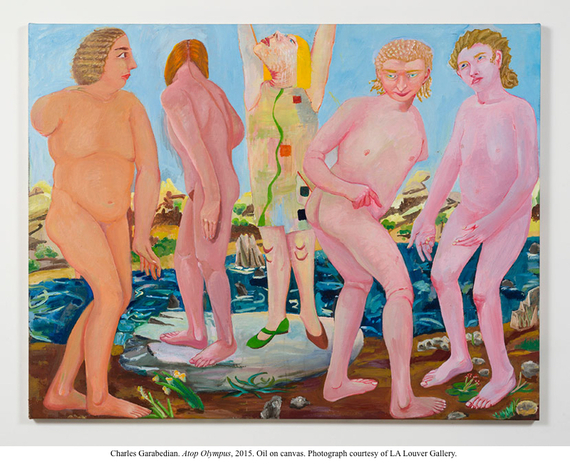 Just look at the first photo on KCRW's Art Talk website. The painting, Atop Olympus, shows five figures -- presumably Greek gods and goddesses. Four of them are naked, though it seems like the artist doesn't care to clearly distinguish their genders. At the center of the composition is a female figure, dressed in contemporary clothing and wearing mismatched shoes. Who is she? Why are her arms raised to the sky? Each of us would probably come up with different answers, and this is the mystery and irresistible attraction of Garabedian's art. 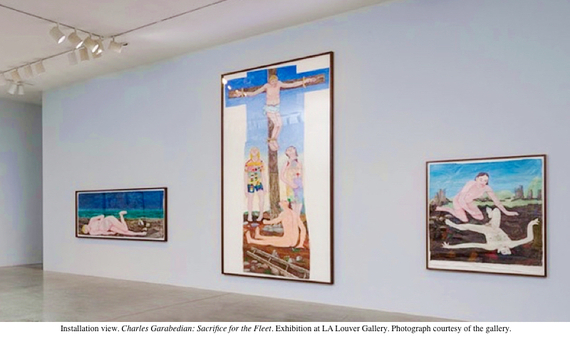 Equally startling is a 12-foot-tall painting depicting the crucifixion -- but not of Jesus Christ. Rather, it depicts the so-called Good Thief, one of the two thieves crucified along with Christ. Once again, along with naked bodies, there are saintly figures dressed in colorful and intentionally ridiculous contemporary clothing. 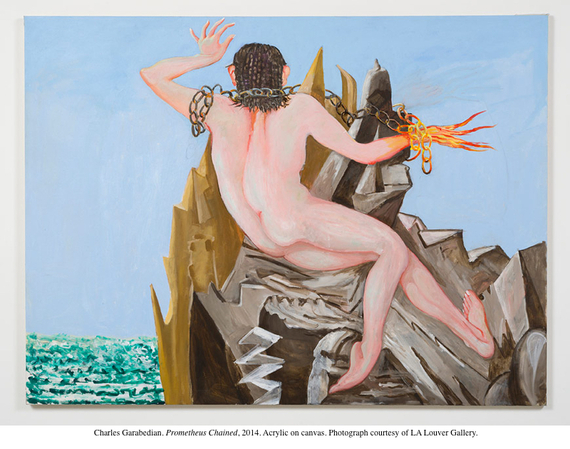 And here is another painting depicting a mythological character, Prometheus Chained. Punished by Zeus for stealing fire from Olympus and giving it to humans, Prometheus is chained to a rock. One of his arms is bursting into flames, but the Mediterranean sky behind him is a quiet, beautiful blue, and the Aegean Sea is a warm, calm green. No matter how dramatic and even painful the subject, the palette of Garabedian's paintings is always soft and even delicate.

In 2011, Santa Barbara Museum of Art honored Charles Garabedian with a sprawling retrospective covering a half-century of his art making. Now, a few years later, with an exhibition of his new works at LA Louver Gallery, the 91-years-young artist is still absolutely at the top of his game. What can I say? Go, Charles. Go... 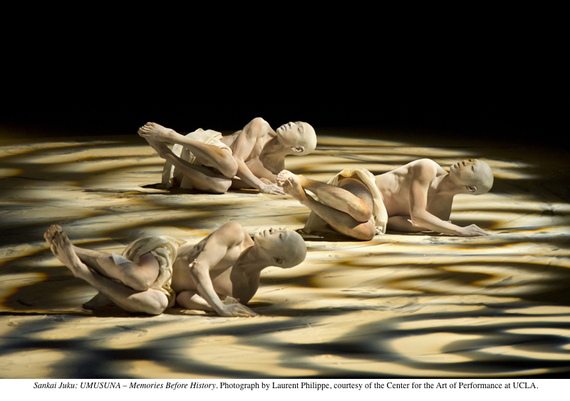 The same day I saw Garabedian's show, I went to UCLA (Center for the Art of Performance, Royce Hall) to see a performance by a renowned Japanese dance group, Sankai Juku. We've seen them perform in LA several times. Especially memorable was their appearance during the 1984 Olympic Games, when the dancers slowly descended from the roof of the Dorothy Chandler Pavilion and stunned the crowd with the danger and the beauty of their performance. 30 years later, Sankai Juku continues to command our attention with the shaved, nearly naked bodies of the dancers completely covered with white powder. Their purposefully contorted movements are so slow that even the tiniest movement of one finger sends a message. Like Garabedian's characters, they are naked, ugly and simply irresistible.