A 15-year-old sculptor is on a quest to replace two public statues honoring Bill Cosby, including one in Walt Disney World, with his own creation intended to shame the disgraced comedian.

Rodman Edwards' proposed artwork is a bronze statue called "Fat Albert Cries for Dr. Huxtable." It depicts a miniature Fat Albert, a cartoon character voiced by Cosby, covering the genitals of the naked, bloated body of Dr. Cliff Huxtable, the protagonist of "The Cosby Show."

Edwards, of Turlock, California, would like the bronze figure to replace existing statues of Cosby currently on display at the Academy of Television Arts and Sciences Hall of Fame in North Hollywood and its satellite location at the Disney resort in Orlando, Florida.

"I want people to see what Cosby is really like. I gave him a creepy look because he's a creepy guy. I was a big Fat Albert fan until I found out how he really was," Edwards told HuffPost. "I just think if the allegations are true, then he should not be represented the way he is by the TV Hall of Fame. Until he apologizes, I think this is a more honest depiction of Cosby."

Thirty-three women have alleged that Cosby sexually assaulted them. The accusations go back to 1965, with many women saying that he drugged them as well. Cosby's representatives didn't respond to HuffPost, but the comedian has previously denied the allegations.

Edwards wants to build the statue after Feb. 20. That's the day he officially will unveil his proposal at the Cory Allen Contemporary Art gallery in St. Petersburg, Florida.

He plans to modify the dimensions in the event the work gets commissioned. 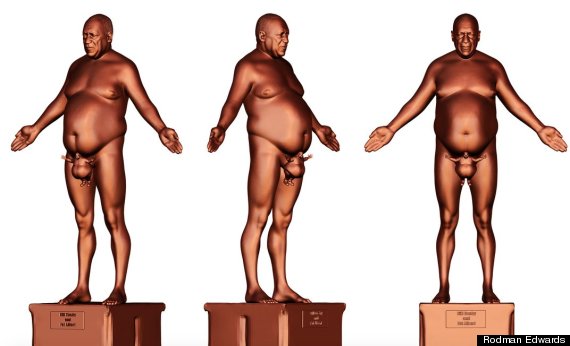 The young artist has never worked with bronze, and it's unclear where he'll get funding. To his credit, he has had success making clay masks, such as a giant Hillary Clinton mask for an anti-Keystone-pipeline rally held in San Francisco, according to Cory Allen, a gallery owner representing him.

Edwards' dad, Daniel Edwards, is an experienced sculptor who has made celebrity-themed pieces such as one depicting Justin Bieber and Selena Gomez naked save for a Canadian maple leaf and Texas "lone star" concealing their respective nether regions.

The proposal could be enough to effect change at the Television Academy by drawing attention to its apparent support of Cosby, Allen said.

"Hall of Fame statues should not be exempt from reevaluation. Sometimes they need to be removed or replaced," Allen said in a press release. "Joe Paterno's statue was taken down following the 2011 Penn State sex abuse scandal. Maybe the TV Hall of Fame and Disney should take note."

The Television Academy did not respond to calls from The Huffington Post.

Bill Cosby Over The Years