Note to management: If you're selling children's clothing by featuring kids running along the beach in your ads, not airbrushing out the naked guy in the background could cause some problems.

At a minimum, some people are going to wonder how you missed the birthday suit -- and doubt that you did.

Earlier this week, La Redoute, a French clothing company, posted a picture on its website that featured a boy wearing its T-shirt running along the beach with three other children his age. Behind the kids, there was a man who, with the help of a zoom feature on the site, could clearly be seen in his birthday suit, according to the French news website 20 Minutes.

Though the French have a reputation for relaxed attitudes toward nudity, Magali Gruet, the head of the Parisian news department of 20 Minutes, said many readers considered the ad offensive.

"It is definitely an outrage, especially on a page with children," Gruet told HuffPost Weird News. "It has shown up on Twitter, and then people shared it during lunch break."

La Redoute sought to nip any potential fallout by publishing an apology:

"La Redoute apologizes for the photo published on its site and is taking steps to remove it. We have opted to delete all the posts including this picture.

"We are aware that it may offend the sensibilities of surfers. We will strengthen the validation process of all brand communications so this can not happen again in the future." 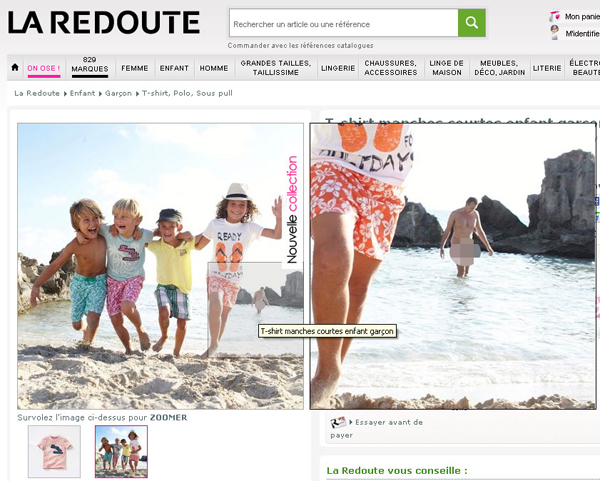 Is that enough? Sally Julien, a Seattle-based PR professional who has represented many global brands, thinks so.

"Professionally, I'd say that La Redoute has taken the best course of action in the situation," she told HuffPost Weird News. "When they realized that some people were offended, La Redoute pulled the offending images quickly, stated its intentions for ensuring that this didn't happen again, and apologized."

Julien said that "speed and transparency are always the top priorities when situations like this, er, arise. And they appear to have ticked those boxes in a genuine and authentic way."

Still, Julien admitted she was surprised at how the French were reacting to the whole scandale.

"I thought only Americans could get so uptight at a bit of nudity," she laughed. "Looks like we have exported that particular bit of prudishness abroad."

It's not yet known whether the naked man's appearance was a mistake made during the photo shoot or if the photo was doctored as a joke of some kind, according to MetroFrance.com.

However, Sean Dougherty, a PR professional who has represented such global brands as Sun Microsystems, Moody's Investors Service, Ernst & Young and Dewey Ballantine, suspects someone at La Redoute might have been ballsy enough to post the naked-guy photo intentionally.

"The company either did it on purpose, à la Benetton or Abercrombie & Fitch, to use controversy to call attention to its brand, or it's historically sloppy in quality control," Dougherty said. "Neither says anything good about the brand. My advice would be to move on and not speak about it. Attempts to give money to victims' charities or otherwise show the work behind fixing the problem will make it look more like a stunt, regardless of the reality."

Meanwhile, the photo of the nude beach-goer -- whose identity also remains unknown -- seems to have become an Internet meme and has already inspired a Tumblr blog.

Though the photo has outraged some citizens, Gruet suspects that it won't have a lasting negative effect on La Redoute's French customer base.

"I think it's momentary and people are laughing a lot about it," she said. "The funny thing is their last ad campaign slogan was 'everything is allowed.'"