A realistic statue of an almost-naked man lurking on a women's college campus is making some students very uncomfortable.

The statue, called "Sleepwalker," was installed at Wellesley College in Massachusetts on Monday. By Tuesday, students disturbed by the statue began a petition to remove it.

"This highly lifelike sculpture has, within just a few hours of its outdoor installation, become a source of apprehension, fear, and triggering thoughts regarding sexual assault for many members of our campus community," wrote Lauren Walsh, a Wellesley senior. "While it may appear humorous, or thought-provoking to some, it has already become a source of undue stress for many Wellesley College students, the majority of whom live, study, and work in this space."

As of Wednesday morning, the petition had 250 signatures.

The sculpture, by Tony Matelli, is part of an exhibit at the school's Davis Museum. In a response to the petition, museum director Lisa Fischman explained that the piece was placed outside the museum on the roadside to connect the exhibition with the outside world.

"I love the idea of art escaping the museum and muddling the line between what we expect to be inside (art) and what we expect to be outside (life)," Fischman wrote. "I watched from the 5th floor windows today (intermittently, over several hours) as students stopped to interact playfully with the sculpture. They took selfies with him, snapping pics with their phones, and gathering to look at this new figure on the Wellesley landscape -- even as the snow fell."

Nikki A. Greene, an assistant professor of art at Wellesley, said the statue was operating exactly the way it should -- eliciting strong and varied responses.

"I teach and research the use of the body in contemporary art," Greene told The Huffington Post. "The discomfort is intentional, though I respect some students' dislike."

Ali Rondeau, a freshman who snapped a photo of the statue, said she understood why some students were getting upset, but she didn't think it was a huge deal.

"For most people, it doesn't seem like a problem," Rondeau said. "They see it as an innocent -- albeit weird -- feature on campus. Others are reacting a little more strongly to it."

Some photos of the statue can be seen below:

The Tony Matelli show opens on Wed, 2/5 @thedavismuseum, but his "Sleepwalker" is on campus! #Wellesley pic.twitter.com/vSdXf17xmq

So this is what happens when guys come to @Wellesley. What will the Wellesley townfolk think? @theDavisMuseum pic.twitter.com/O3qLxPCqew

"We don't always have naked men at Wellesley, but when we do, they're creepy." pic.twitter.com/oot3yGbgJw 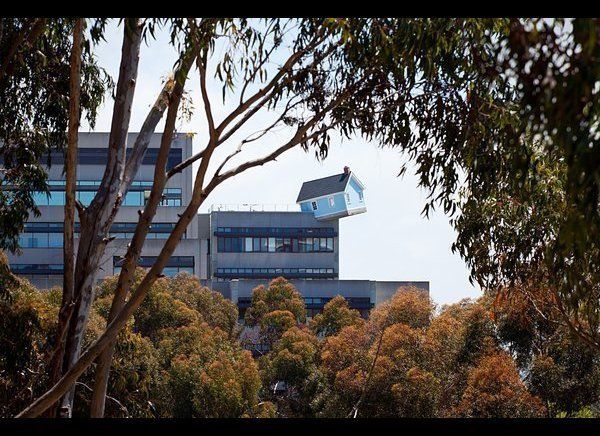 1 / 7
Fallen Star
Finished in June 2012, Do Ho Suh's <a href="http://www.apartmenttherapy.com/cool-art-do-ho-suhs-fallen-star-at-ucsd-172370" target="_hplink">"Fallen Star"</a> is located on one of the UC San Diego's engineering buildings. It's a house hanging off a seven story building and as Do Ho Suh said himself, "It's something that's very out of context." It's fully furnished with a yard and garden accompanying it on the roof of the building.
Philipp Scholz Rittermann / June 16, 2012