That's the question some Vancouver locals were asking after a naked, anatomically correct statue of Satan was mysteriously erected in a local park.

The 9-foot-tall statue was a representation of the devil, complete with red skin, a pointed tail and horns atop his head. The statue also holds one hand up in a devil-horn salute familiar to heavy metal fans the world over.

But what has aroused controversy is the statue's prominent, erect phallus, CTV News reports.

It's quite a graphic display so it's been hidden, but it can be seen by
clicking here. 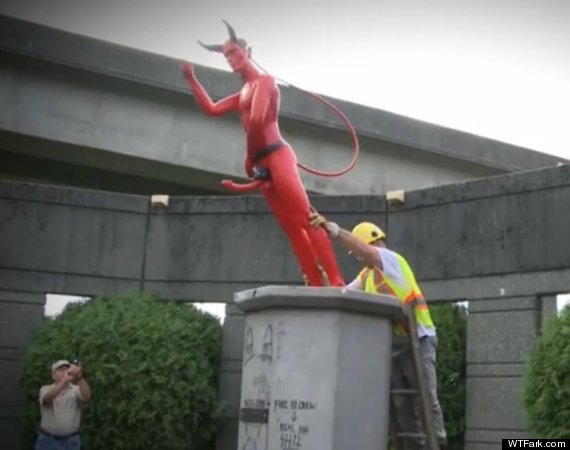 The satanic statue was erected on Tuesday on a pedestal that previously was home to a bronzed — and clothed — Christopher Columbus commemorative statue installed in 1986, according to Straight.com. The statue was moved to the Italian Garden in Hastings Park 10 years ago.

No one has claimed responsibility for the naked Satan, according to CTV News. But the bulging Beelzebub was quickly removed because city officials weren't exactly nuts about it.

“The statue was not a piece of city commissioned artwork and consequently it has been removed,” Sara Couper, a City of Vancouver spokeswoman, told GlobalNews.ca.

City officials haven't said what they plan to do, but a man named Mike Granger has started a petition on Change.org asking it be given to him for inclusion in an "Odditorium" he runs, according to the Winnipeg Sun.

One of the lines in the petition warns the city: “By removing the statue of Penis Satan, you are taking from us our freedom of expression, restricting our sexuality, and stigmatizing our religious beliefs. Please return him immediately."