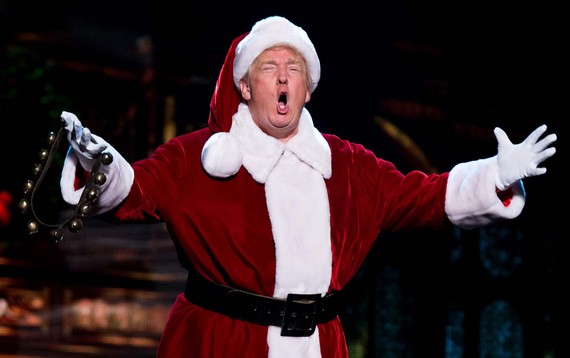 Say what you want about Twitter; no social media platform encourages the world's creativity and comedic tendencies quite like a clever hashtag and 140 characters.

See last weekend's kerfuffle following the Hamilton curtain call, when a cast member from the Broadway smash musical delivered a prepared message to performance patron and Vice President-elect Mike Pence on immigration and diversity. Pence, critics argue, is a fierce opponent of both, judging from an assortment of his policies while governing Indiana.

Within hours, the hashtag #NameaPenceMusical was trending and the social media world piled on, with suggestions ranging from the hilarious ("The Book of More White Men") to the angry and pointed ("Rent ... But Only to Straight People").

Thoroughly entertained by such variety, I spent the weekend refreshing my Twitter feed in between hauling up boxes of Christmas (is it OK to say that?) decorations that will adorn my house for six weeks. Or longer, depending on when my lower back recuperates from lifting boxes of holiday china. Two years ago, Easter dinner included wine glasses etched with holly.

The final box was my favorite. Marked "Holiday Movies," it contained a collection of DVDs and even a few VHS tapes that, while awaiting Dec. 25, my family watches repeatedly. It's just not Christmas in the Schwem household until we hear Macaulay Culkin's Kevin McCallister taunt a pair of bumbling burglars with, "You guys give up? Or are you thirsty for more?" Ditto to Will Ferrell's Buddy the Elf admonishing a department store Santa with the zinger, "You sit on a throne of lies!" Admit it America, we never tire of these classics.

Or do we? Our country has signaled it wants change, an attitude it finalized via the electoral college. We've chosen a president who, his supporters say, tells it like it is, won't kowtow to the Washington status quo and won't govern like any of his predecessors. The days of same old, same old are over.

If change is what we crave, then I call on our nation's film directors to update those holiday classics even though reboots usually fall immediately into the "flop" category. Did ANYBODY see Annie with Jamie Foxx?

But submitting suggestion via Twitter, accompanied by the hashtag #NameaTrumpXmasMovie, just might inspire a budding Spielberg or Zemeckis to craft something guaranteed to make the multiplex great again come Christmas 2017. Here are a few suggestions:

Miracle on 5th Avenue: A man claiming to be president is holed up in a Manhattan skyscraper. A psychiatric exam reveals many "un-presidential tendencies," but the man sues the psychiatrist and is eventually allowed to assume the role of commander-in-chief after the former mayor of New York City goes on Fox News and testifies to his character. His comments are embellished worldwide via fake news sites.

Home Alone 5: Lost in Washington: Our nation's president is left alone in the White House over Christmas. Mayhem ensues when he tries to ward off an ISIS attack without any counsel from veteran security and anti-terrorism experts.

A Very White Christmas: An entire presidential cabinet is appointed just in time for the holiday.

Trading Places: Sixty-one million people successfully bet 63 million others that it's possible to take a private citizen with no political experience and transform him into the leader of the free world. No money is exchanged as the losing group stages protests and demands the current betting system be abolished.

The Presidential Clause: On Christmas Eve a divorced father finds a red tie and a suit from the sitting president's designer clothing line. An attached note says, "If you are reading this, I have found the job to be too difficult. Put this suit on and assume the role of commander in chief."