Photojournalist Jeremy Lock’s aerial obsession began when he served as a military photographer with the U.S. Air Force for 22 years. While clocking over 800 hours in the air, Lock found that he had a good bit of downtime on particularly long missions. “I started taking photos out the window to give myself little challenges,” he says. When he retired from the military in September 2013, the game had grown into such a passion that wherever he travels, he makes a point to spend time in the air, camera in hand.

Ever since retiring, Lock says that he loves traveling with his wife to places where he can continually hone his craft. On their 30-day trip through Africa, Lock grasped the perfect opportunity to not only get off the grid, but off the ground as well. Together with a pilot, the couple spent three days flying around the 1,000 miles of burnt orange and caramelized brown stretching along the Atlantic coast. According to Lock, those three days were the highlight of their trip to Africa ― her riding shotgun in the J430 and him hanging out the backdoor, together “exploring the old scars and shape shifting land of Namibia.”

Along the shoreline, Lock found marks in the terrain from parallel sets of dunes butting against the water. Strapped into the aircraft with only the seatbelt keeping him safe, Lock captured the wall that these dunes formed against potential storms blowing across the water.

“The oldest dunes are those of a more intense reddish color,” says this photojournalist. The more intense the color, the higher iron concentration in the sand. From the air, then, the landscape takes on sunset colors.

Skeleton Coast and the Sands of Hell ― both names describe the line where the Atlantic Ocean meets the desert in northern Namibia. Lock says that the coastline has long been known to be a graveyard. According to legend, the coastline destroyed many a ship and crew.” The Skeleton Coast is his favorite shot from the desert set because of the way the desert and ocean meet.

Visiting the Kunene River was the first time Lock saw and interacted with the people who inhabit the area. He experienced it from the air, chasing a small runoff as it made its way to join the sea, and also from the ground. It was the first time he saw any people who inhabited the place. The Himba people used an ochre and butterfat mixture to create a red pigment which they rubbed all over their bodies. Lock and his wife, without a translator, used smiles in lieu of spoken language. The Himba children played with his wife’s hair, marveling at it and she, in turn, played with their hair. There, next to a river in a desert, mutual curiosity for each other overrode traditional communication.

Meeting the Himba reminded Lock of two lessons he learned in the military. “There is more to life than the white picket fence with two-and-a-half kids,” he says. “You don’t need a lot to be happy, but respect and love each other.”

For Lock, photography is about first experiencing something incredible and then communicating that experience to someone else. The time spent zooming around above the desert was particularly special for this photojournalist as he was able to share the experience with his new wife, showing her what he does and why he does it.

On one trip, he captured lichens organizing themselves into carpet-like ruffles across the dunes near Swakopmund, a city on the west coast of Namibia. After shooting the Namib Sand Sea, Lock diligently researched the place, discovering that the 120 species of lichens growing on the west-facing slopes draw moisture from the sea fogs. His camerawork ignites with a passion to find marks of life, those old scars and character, even in a place that may seem, from the ground at least, unsustainable.

Over the few days spent flying over the Namib Sand Sea, this photojournalist accomplished his goal: “I wanted to show the rough and raw beautiful terrain that will constantly change over time.” He hopes to make these photographs part of a larger body of aerial work. An adrenaline-filled flight between two layers of sunset hues and a shared experience with his wife ― the venture allowed Lock to lift his lens to familiar, but still thrilling heights and capture the character of the land. 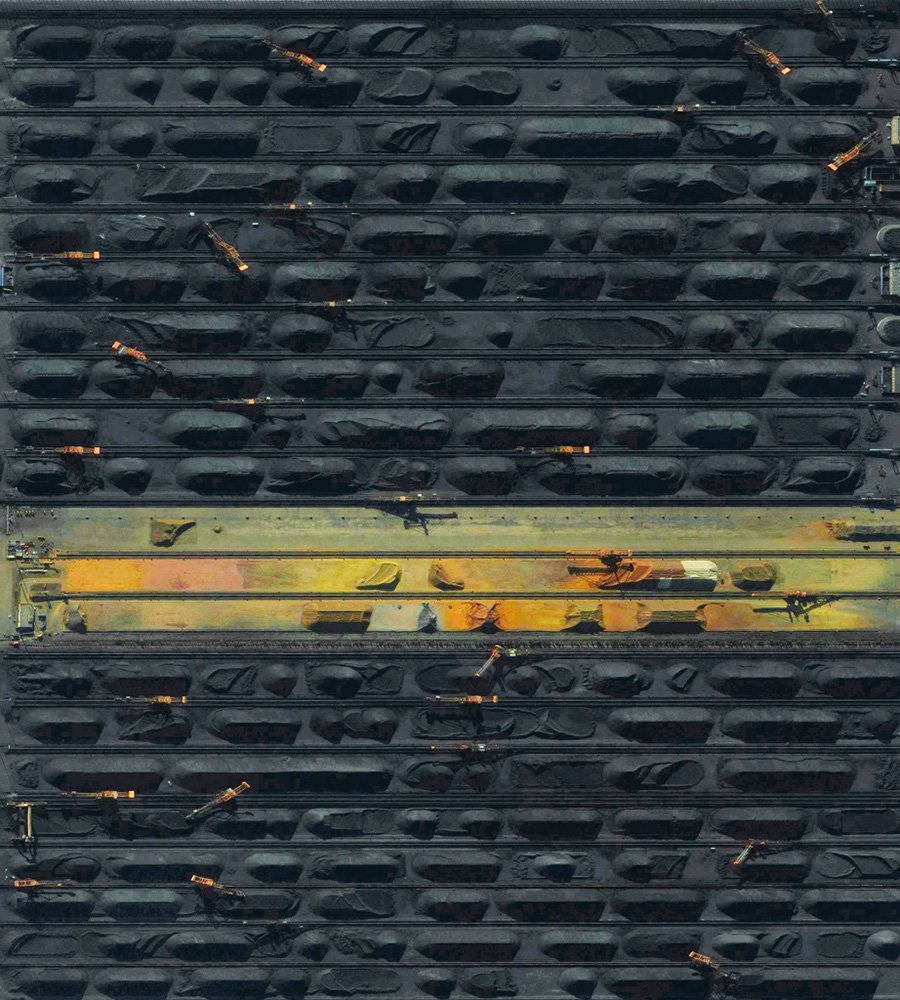 1 / 16
<strong>Qinhuangdao Coal Terminal</strong><br><br> The coal terminal at the Port of Qinhuangdao in China is the largest coal shipping facility in the country. From here, approximately 210 million tons of coal are transported to coal-burning power plants throughout southern China every year. In 2015, new data from the Chinese government revealed that the country has been burning up to 17 percent more coal each year than previously disclosed. The sharp upward revision in official figures means that China has been burning an additional 600 million tons of coal each year, and has released much more carbon dioxide &ndash; almost a billion more tons per year &ndash; than previously estimated.
DigitalGlobe/Benjamin Grant/Amphoto Books