The lion stared at me, less than 10 meters away, then growled. I cringed, realizing that with just a quick, short leap, he could pull me out of our open safari vehicle and drag me away. 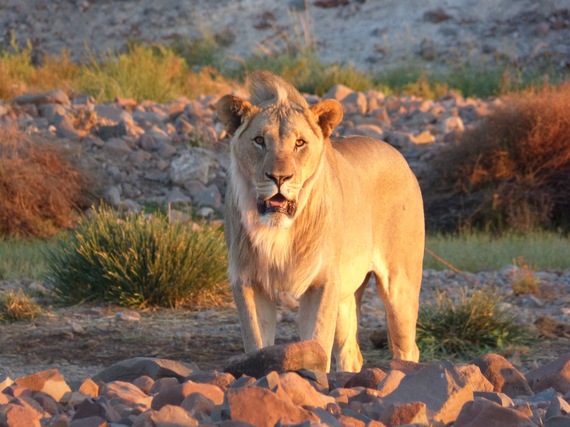 That lion sighting -- it seems almost too casual to call such a close encounter a "sighting" -- was just one of several, albeit the most dramatic, of my three week trip last November to Namibia, the undiscovered gem of southern Africa.

Our trip began with a visit to Etosha National Park (hosted by Namibian Wildlife Resorts). Etosha, which means "great white plain," is the flagship of the Namibian wildlife park system and one of the best reserves of its kind in the world. Etosha looks like something from a post apocalyptic sci-fi movie. The stark, sun-baked expanse of earth stretches to the horizon. Mirages shimmer in the distance above the salt pan. Sunsets glow over the parched landscape. 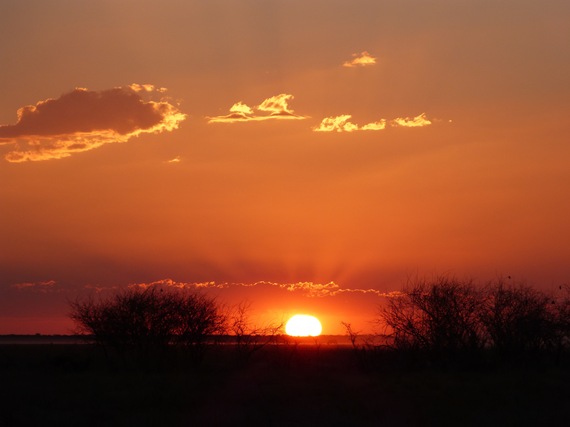 I saw more wild animals in Etosha -- including lions, elephants, rhinos, zebras, giraffes, ostriches, jackels, hyenas, wildebeests, several different kinds of antelope, and cheetahs - than I have seen anywhere else in the world, including Kenya and Uganda, the other two sub Saharan African nations I have visited. 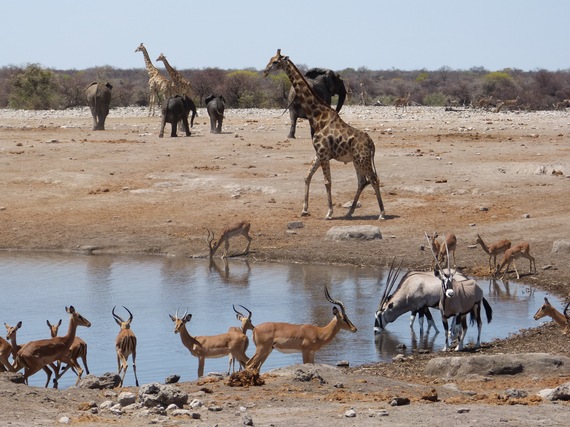 After Etosha we spent several days in Swakopmund on the Atlantic coast to attend an adventure travel conference, then embarked on a seven day fly-in safari, organized by ATI Holidays and Wilderness Safaris, for a very different kind of wildlife experience.

Our first stop was the award-winning Damaraland Camp in the north central part of the country. Damaraland is a pristine wilderness, a hot, empty land with rocky, rust-colored buttes and mesas, separated by vast, sandy lake and riverbeds. The flora and scenery are vaguely reminiscent of the American Southwest, absent the highways, motels and gas stations.

The main attractions in Damaraland are, of course, the elephants, lions and rhinos that have learned to adapt to the harsh desert climate. We weren't disappointed. On our first game drive we found a herd of about 20 elephants, including several babies and youngsters of various ages, on the banks of a dry riverbed.

We had seen many elephants in Etosha, but this was different. Damaraland felt much wilder. We were the only ones there, and it was clear from watching them that they were not used to humans. They were skittish, as was our driver who made sure that we were always positioned for a fast retreat -- as fast as a 4X4 can go in deep sand -- in case the elephants became aggressive. 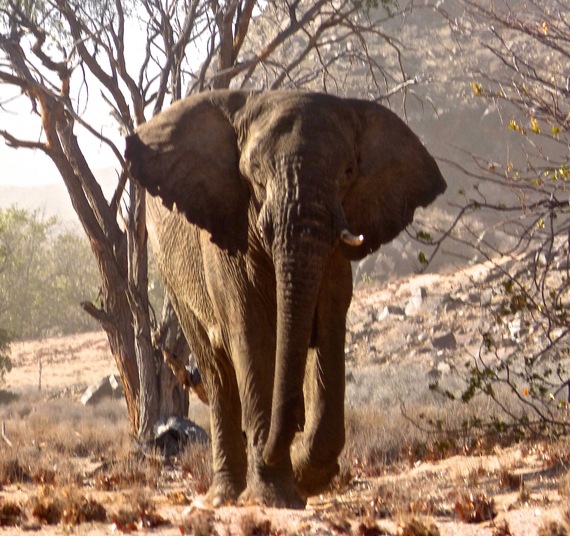 Elephants were not the only animals we saw in our two days in Damaraland. Giraffes, zebra, oryx, springboks, jackels and ostriches darted across the dry lakebeds or through the brush on the riverbanks, sometimes stopping long enough to pose for photos. 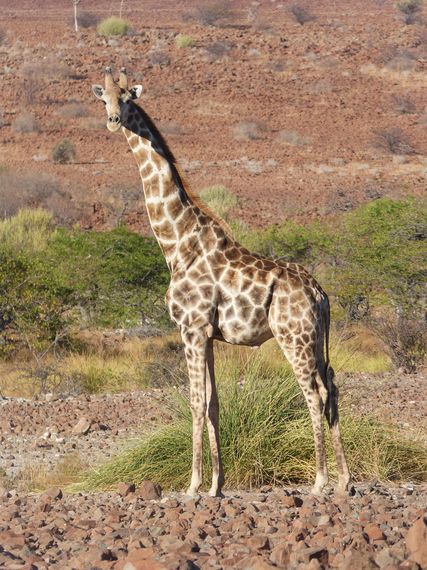 The next two days of our fly-in safari were spent in paradise. An hour and 45 minute flight in a teeny 4 seater plane and an hour drive through some of the most beautiful, otherworldly scenery I have ever seen -- it felt like we were in the Mars Rover -- we arrived at Serra Cafema Camp on the Kunene River, across the river from Angola. The camp is spread out among the trees along the banks of the river -- a lush, luxurious oasis in the middle of a stunning nowhere of rugged desert mountains, steep canyons, orange sand dunes, and wide open vistas.

This is not a place for game drives on bumpy tracks. Instead we went on a long, guided walk on sand dunes and a rocky promontory above the river, ate a leisurely gourmet lunch on a sand bar, lounged in a sofa on the deck of our chalet, and floated downriver in a small boat looking for crocodiles. We found several. 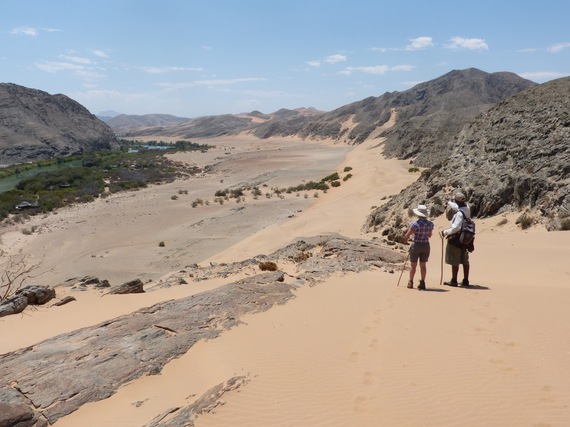 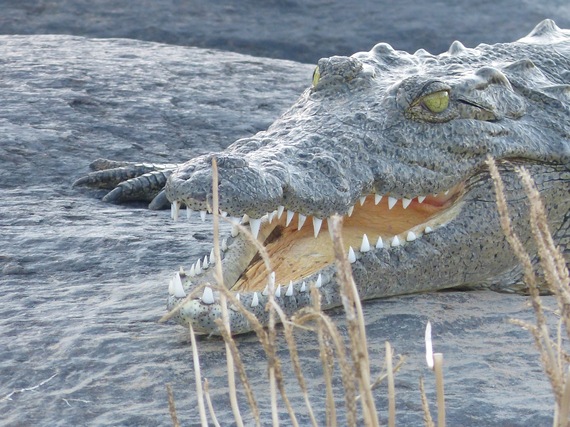 The last stop in our fly-in safari was Etendeka Mountain Camp. Etendeka is in the same general vicinity as Damaraland Camp, but the scenery is somewhat different -- red, rocky, rolling terrain with lots of cliffs and flat topped mesas. Just raw, unadulterated nature, as wild as it gets.

Etendeka Camp is as basic, rustic and no frills as Serra Cafema is luxurious. Designed for sustainability and low impact, the camp is simple, intimate and homey. We felt like we were visiting someone's home, rather than a commercial establishment.

But it was the wildlife that made this place special. Like Damaraland, the wildlife is not as abundant as in Etosha, but the sightings felt as pure and authentic as could be viewed from the relative comfort and safety of a safari vehicle. Besides the scariest lion sighting of the trip, we also saw elephants, giraffes, oryx, springboks, kudu, but none of the elusive desert rhino for which the area is known. We also spotted our scary lion with his mate on another day, in a more relaxed moment. 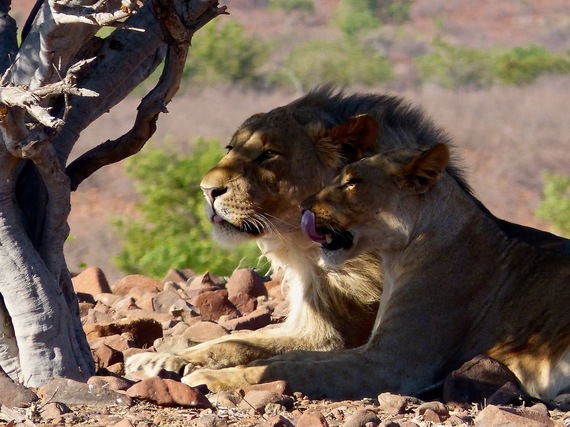 On our last evening, after my up-close encounter with the growling lion, I was a bit spooked as I walked from the lodge to our tent. I realized that the lion was not that far away. The next morning, the couple in the next tent told me that they had heard a lion walking around outside in the middle of the night. I couldn't help but think that maybe he was looking for me.

(for details plus descriptions of other destinations in Namibia, see the Adventure Geezer blog on Don's website).