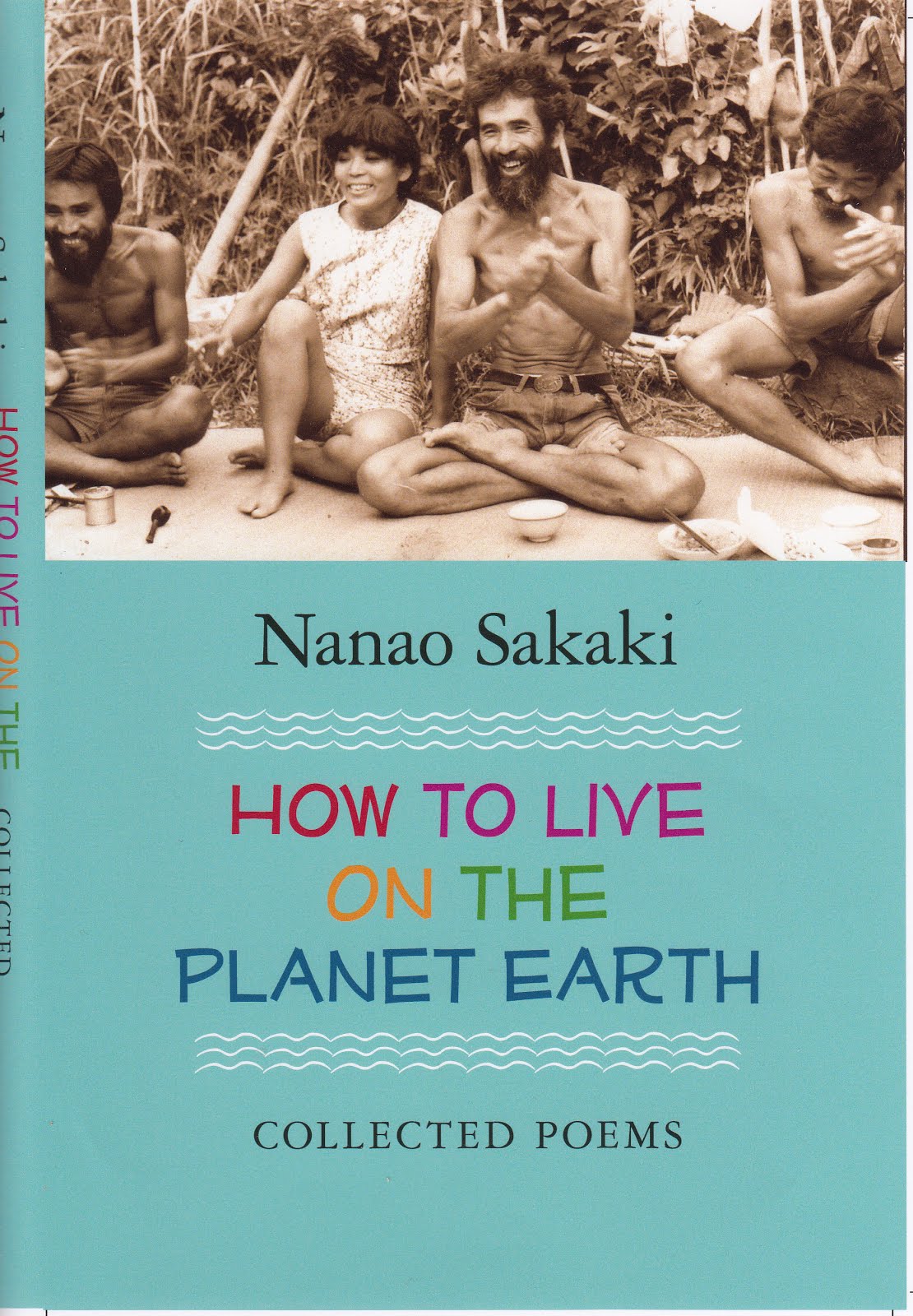 "One hundred years from now Nanao will be considered the major poetic influence in Japan," said Gary Snyder at a recent gathering in the late Nanao Sakaki's honor. Considering the source, that's very high praise indeed. But most Americans, even those who enjoy poetry, might well respond "Who?" And thus this little tribute, in honor of one of my very favorites.

I first came across Nanao Sakaki's little book Break the Mirror (published first by North Point Press) by chance and it became an essential book for me, and one I gave as a gift many times. The first poem therein, "Happy Lucky Idiot" had me hooked from the start:

Snyder, in his introduction to that little book, called Nanao "a uniquely free and bold-spirited wanderer, occasional river or mountain activist, singer and chanter and internationally published poet." Now, five years after Nanao's dying, a collection of his writing has finally appeared, titled How to Live on the Planet Earth.

"Happy Lucky Idiot" is printed on the back; inside is Snyder's original introduction to "Break the Mirror", the few other brief books Nanao published during his life, and some uncollected work.

Nanao wrote in free verse, prose, in more traditional forms such as haiku, in forms something like plays, with line drawings, and in ways that could only be called Nanao-ism. His work is infused with a love of nature, a deep distrust of modern technological imperatives/optimism and industrial "culture," and a commitment to preserving that which is essential and lasting. His own life seemed to embody those values, as he has been described as a wanderer, an eco-warrior, a modern-day blend of Basho and Thoreau. He was an inspiration to a fair number of poets and others who knew there was really nobody else quite like him; devotion to him was so strong that he was described as the focus of a positive "counterculture cult" -- albeit one with no structure or formal membership.

Nanao has also been described this way http://poetry.about.com/od/contemporarypoets/p/sakaki.htm: "a walking collective call of the wild man, commune cofounder, scholar of languages and aboriginal culture and tribal traditions, troubadour to hang out with, lover of 'shrooms and the herbs, movement maker, The Tribes, homeless (except for the cabin in Shizuoka), green guru guy, activist, translator of haiku, mantra sutra rapper using the 5/7/5 syllabic meter...."

Sakaki was born in 1923 and was drafted into the Japanese army during WWII. Snyder described him meeting with kamakazi pilots for their last suppers before their morning suicide missions. Meanwhile he was studying writers like Nietzsche and Marx and developed a deep opposition to the warlike mentality of his nation. After the war, he lived under bridges as homeless transient for a time, did physical and office labor, still studying english and primitive art, Buddhism and more. He wandered forests for over three years and started writing poetry influenced by this natural world.

By the time the 1950s were ending, Nanao was becoming "a gentle breeze-like force for the foot-loose generation of poets and students" in Japan, Snyder has written. He again "went homeless." Eventually he met Snyder, who was studying Zen in Japan, and it seems the two had much mutual influence on one another. Nanao's informal "Tribe" of young people seeking a spiritual and semi-practical alternative to mainstream culture and economics was analagous to the smarter sector of America's "hippie" movement; they also called themselves the "Bum Academy."

Nanao visited the US a number of times, exploring, doing a few poetry readings, and at one point starting a successful counter-movment to save an endgangered coral reef in Okinawa. He was opposed to nuclear power plants but died in 2008 http://mygrations.blogspot.com/2008/12/nanao-breaks-mirror.html and one can only wonder what he might have said and done about the Fukushima Daiichi debacle http://www.huffingtonpost.com/steve-heilig/facing-the-wave-a-journey-in-the-wake-of-the-tsunami_b_2919931.html

At the memorial reading in San Francisco this spring, the hundreds of attendees could feel the love and respect for the poet. Veteran poet Michael McClure compared Nanao to legendary haiku poet Issa; Heyday Books publisher Malcolm Margolin recalled "Whenever Nanao was in town it was a wonderful party." More than one speaker observed that much of Nanao's mindset and work was formed in reaction to Japanese militarism, when "the whole nation went nuts" and that, as Margolin put it, "that he took up the life a wandering poet was such a blessing for us!"

Nanao's friend and publisher Gary Lawless related that Nanao once said "Internet? Not so charming" -- about as succinct a judgment as possible. But he certainly deserves to be remembered and celebrated even in the unnatural, coal/nuke-powered cyber realm. Better yet, go get his book. Everybody I've gifted it to has thanked me, and I believe they meant it. 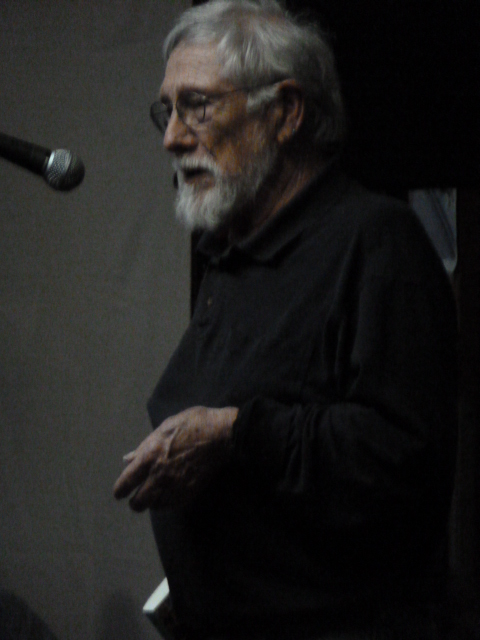 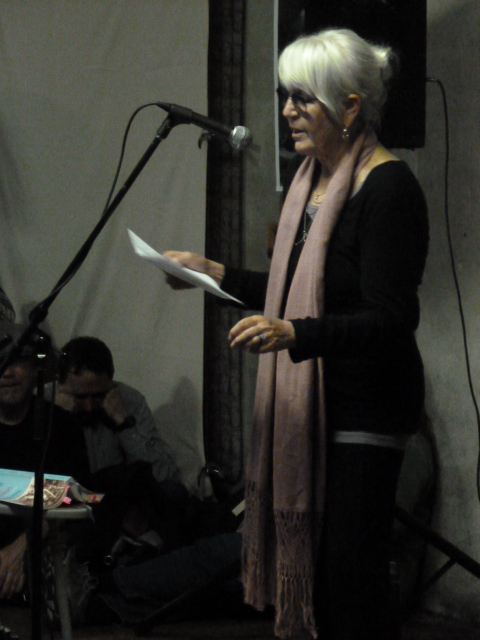 In the morning
After taking cold shower
---what a mistake---
I look at the mirror.

There, a funny guy,
Grey hair, white beard, wrinkled skin,
---what a pity---
Poor, dirty, old man,
He is not me, absolutely not.

Land and life
Fishing in the ocean
Sleeping in the desert with stars
Building a shelter in the mountains
Farming the ancient way
Singing with coyotes
Singing against nuclear war--
I'll never be tired of life.
Now I'm seventeen years old,
Very charming young man.

I sit quietly in lotus position,
Meditating, meditating for nothing.
Suddenly a voice comes to me:
"To stay young,
To save the world,
Break the mirror."