It’s not a campaign for potato salad, but this might be one of the more creative uses of Kickstarter we’ve seen yet.

After streaming ESPN’s “30 for 30” documentary spotlighting the 1994 Nancy Kerrigan-Tonya Harding Olympic figure skating scandal on Netflix, Brooklyn-based comedians Matt Harkins and Viviana Olen were apparently so inspired by the drama and intrigue of it all that they launched a Kickstarter campaign to convert a long hallway in their shared two-bedroom apartment into a “museum” dedicated to Kerrigan and Harding.

Just how serious are the two comedians about their endeavor? According to their Kickstarter bio, “very very serious." They echoed that sentiment to The Huffington Post, saying, "We are fully prepared to take this to the limit."

As of Wednesday, the two had surpassed their modest fundraising goal of $75, with almost double that donated to their endeavor. The campaign, which started Tuesday, will close on March 5. 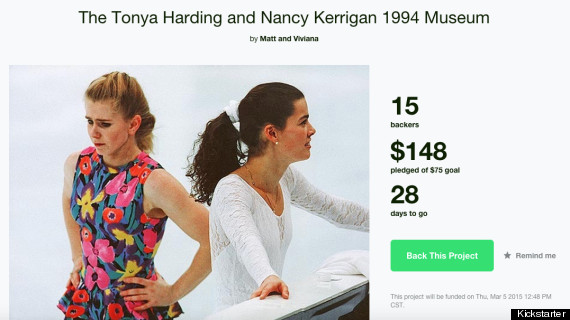 According to the campaign, the funds will go toward “the enlargement of historical documents (Tonya and Nancy pix).” And if there is enough interest:

Matt and Viviana can begin acquiring artifacts, facilitate more public access, and curate grander exhibits. This includes people's crafting projects, wax figures, historical reenactments and other Tonya and Nancy related creations which can be deemed part of the cultural response to this event and therefore added to the museum's collection.

“They want to blow up pictures really big and hang them up in the hall,” the Kickstarter description reads. “Their favorite pictures are ones that have Nancy and Tonya together. Tonya is always looking at Nancy out of the corner of her eye."

In exchange, project-backers can enjoy a variety of perks, the page notes. Those who donate $1 will have their names written in a notebook under the title “Friend of the Museum,” while those who donate $100 will receive a 30-minute pass to the museum for two, two 8-ounce Diet Cokes and a guided tour.

Big-spender backers pledging $10,000 or more receive the “Olympic gold medal package,” including a weekend at the museum, guided tour, 24-pack of Diet Coke, high tea service for four, “permission to go through all of our things” and “a big party at a venue with cupcakes and a DJ following a TED talk about Tonya and Nancy given by the chief curators of the museum (Matt and Viviana).”

If the campaign is an even bigger hit, they say they’ll “quit their jobs for a year and dedicate themselves to the museum including more research and the possibility of a touring exhibition where they'll go to wherever Tonya lives and buy her a really nice dinner.”

In the past 24 hours, the comedians say they've gotten "more serious about letting more people inside."

"The first draft had a tour starting at $500, then all these people started talking about it and wanting to actually come. And we realized these aren't gonna be weird psychos; they're gonna be weirdos just like us! And who are we to make something cool and say people can't come?" the duo told HuffPost in a series of messages on Twitter. "But now that there's so much interest, the goal would be to get as much raised as possible to we could spend a year letting anyone who wanted come up! And have a big party!"

All that said, the pair said they haven't alerted their building super to their "museum" plans yet, so we'll have to see it to believe it.