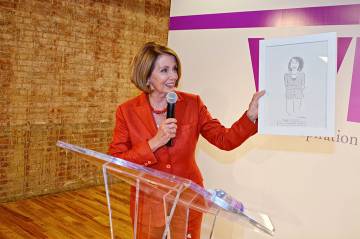 This past weekend, I attended Arianna Huffington, Donna Karan and Sarah Brown's second-annual WIE Symposium (Women: Inspiration & Enterprise), an event which set out to explore the central theme of "What it means to be a woman now" through a variety of thought-provoking and informative panels and lectures. The two day event, which benefited the White Ribbon Alliance for Safe Motherhood, featured a keynote from Dr. Jill Biden and a wide diversity of esteemed and inspiring speakers. Several women leaders and activists were also honored with WIE awards. I was there for the presentation of the WIE Leadership award to Nancy Pelosi, the Democratic Leader of the United States House of Representatives, who made history when she became the first female Speaker of the House, a position she served from 2007-2010. She currently serves as House Minority Leader.

Pelosi was presented with the award by Jeffrey Sachs, American economist and Director of the Earth Institute at Columbia, who praised her as "someone who has stood for the right things very, very boldly and with incredible consistency ... with a long track record of decency, leadership and wise judgment." Sachs called her "one of our country's greatest leaders for women's rights, for sexual reproductive rights, for the defense of all groups in our society" as well as an important champion for peace.

When Pelosi took the stage, she shared her personal story of getting from "the kitchen to the Congress" and from "being a powerful homemaker to being the House Speaker" (Pelosi has five children and eight grandchildren). One inspiring story she shared was about her first official meeting at The White House after being elected House Speaker -- with then President Bush, the Vice President and the other leadership of the Democratic and Republican House and Senate. She said she had the sensation of "feeling very squeezed in my chair, I just couldn't figure out what it was, just very tight." She realized it was the presence of "Susan B. Anthony, Elizabeth Cady Stanton, Lucretia Mott, Sojourner Truth, Alice Paul -- they were all sitting on the chair with me, in that room. And then I could hear them say 'At last we have a seat at that table!'" Pelosi paused for the audience's applause and cheers, then added, "And then they were gone. And my first thought was, we want more!"

Pelosi then went on to talk about the uphill battle and criticism those pioneering suffragettes faced in their tireless and brave fight for a women's right to the vote, reminding us that she and all women today are "standing on their shoulders." Pelosi says it was a "tremendous" achievement to have become the first woman Speaker, adding, "You have no idea how it is there -- it's like not a glass ceiling, it's a marble ceiling."

In the remaining portion of her speech, she touched on many topics, ranging from making sure her colleagues "consider women when they come to the table to make decisions," fighting discrimination against women in health care ("no longer will being a woman be a pre-existing medical condition"), alleviating poverty and disease and helping women in the Third World, and the growing role of women's entrepreneurship and women-owned businesses in fostering job creation and boosting the economy. She ended by addressing the room, saying she was excited to see "so many young women with all your hopes, dreams and aspirations." She encouraged them to "understand that your success will help so many other people in the world... We all have to do our part. Nothing is more wholesome for our country than the increased participation of women in government, business and the academic world and the leadership of our country."

Immediately after her speech, I was honored to have a few moments alone with Pelosi to ask her a few questions.

Marianne Schnall;: That was a very inspiring speech. For the people who might not have been able to be here, what was the one message you are most hoping to convey?

MS: Only 17% of Congress is women. What can we do to change that and get more women into positions of political leadership?

NP: Yeah, I know, it's a small percentage of Congress. But we have to do more. It's a decision we have to make as a country. But women also have to decide and be confident about taking the chance of running -- it's tough.

I think women also have to -- and I have said this to some groups lately -- women have to have each other's backs. Because we are talking about power. And nobody ever yields power. It is fought for. And when women go forward -- they are great competitors, but therefore they become great targets. And women have to help women in that regard.

MS: I realized I have been fortunate to interview a lot of women "firsts": Madeleine Albright, the first female Secretary of State, Sandra Day O'Connor, the first woman on the Supreme Court, and now you, the first female Speaker of the House. As a a trailblazer -- what specific, unique advice would you have in terms of breaking through barriers and obstacles, or as you said, glass or "marble" ceilings?

NP: Well, you've named two wonderful people -- Sandra Day O'Connor is so respected in our country, Madeleine Albright as well. Mine was a little different in that I had to be elected to it. And so it was always about competition and a fight in that regard.

But I always say to people -- know why you're there. What is your vision? What do you hope to achieve with all of this? What is your vision, what do you know about the subject? Be equipped with knowledge so that gives you good judgment. Understand your strategic plan for how you want to get something done. And if you have a vision, knowledge of what should be done, and a plan, and a path for achievement, you will attract -- which is the fourth part of it -- you will be able to attract support for what you are doing. It is a more emotional thing, at that level, the attraction level -- the others are more intellectual. But I just say, be clear, be clear about your priorities, understand what you are talking about. And that has to come through. Have a plan and you will get support, I guarantee it.

MS: Without making generalizations, what unique qualities do you think women can bring to leadership that you think is most needed in the world now?

NP: I can say this without any doubt [laughs] -- I have no hesitation -- women bring a consensus building attitude that is not always present at the table. When I first became Speaker, people would come to me and say, 'Do you know how different this meeting would have been if a man had been running it?' We build consensus, we don't dictate policy.

Secondly, I really do believe that women have an intuitive sense, which is very important in leadership. Sure, we all are deductive and learn from this and learn from that -- but if you have a vision, and you have knowledge, and you have a plan -- you know what decision you need to make intuitively. And that confidence is contagious. If you act in that decisive a way, people will have confidence in you. And they'll follow your lead. And if they don't, then you have a different path, but you will not have your possibilities diminished because you waited too long to make your judgment about what the consensus is in your groups, consistent with our values, based on knowledge and values and part of a plan to get the job done.

MS: Right now, people are mostly focused on what's going on with their own lives - such as the economy -- and in your speech you talked about the role of women's innovation and the growth of women owned businesses -- do you think we are getting to a point where these aren't just seen as "women's issues" -- where people see the interconnection of empowering women with other issues?

NP: Oh, absolutely. And the thing is that we don't want women just to become involved to do so-called "women's issues" -- the defense of our country, the economy of our nation, the global prosperity -- these are all women's issues.

MS: Looking out at the world right now, it can feel so daunting all the problems we face, and people are very overwhelmed in their own lives and may feel like nothing they do can make a difference. What would you say to that person?

NP: There is no question that people can make a difference. And sometimes when things are as troubled as they are now, there's even more opportunity to make a difference, and certainly more responsibility to be engaged.

MS: Right now people can feel very hopeless and despondent with what is going on in the world. What keeps you hopeful and gives you faith?

NP: Well, because it's urgent. You cannot surrender to that. But you know what? There are plenty of reasons to be hopeful, because people are engaged. They are paying attention. And that gives us an opportunity to make the choice -- the distinctions and the choices that are there.

MS: What is your vision or wish for the future?

MS: I have two daughters, ages ten and thirteen. I think about young girls today who can often lose touch with what you are talking about, their power and their own inner voice and intuition. What advice would you most want to offer to young girls?

NP: I would say that one of the things that encouraged me so much when I became elected to the leadership was the letters I received from fathers of daughters, saying that my daughter can now do many more things because of what you did. And that was the best thing I could ever hear. I think with these young girls these days -- they're raised -- you're raising them in a different way than certainly I was raised. And I don't know how you were raised because you're in between us -- but they have to have the confidence that they can do anything. And they can just reach for the stars. Go for it! Swing for the fences. They may end up someplace between here and the fences, but they'll end up a long way down the road. So I say it again -- know your power, respect what is inside of you and value it, and be ready for the opportunity that comes along.