A couple of months ago, I received an email from Berlin. I did not recognize the sender.

She told me that she and her neighbors have grouped under the Stolpersteine project to install "stumbling blocks" in their neighborhood, Wilmersdorf-Berlin, in memory of the Jews who lived in their neighborhood during World War II, before they were forced to board the "one way" trains.

A "stumbling block" is a brass plate the size of one brick, stamped with the person's name, birth date, where he was transported to and when. The stone is embedded in the pavement in front of the place the person latest home (excluding concentration camps). The Stolpersteine project takes place throughout Germany and as a result, thousands of small personal memorials have been placed in the neighborhoods of origin, on the daily route of pedestrian (as opposed to a centralized grand memorial where people assemble for grand ceremonies.) 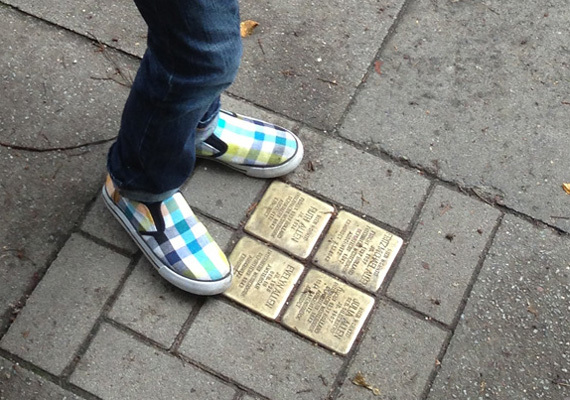 To start off, the neighbors made a list of 82 deported and murdered people who lived in their neighborhood, and started researching for any piece of information they could find about those people's lives. They also searched for relatives.

The Berliner (who found me through one of the genealogical websites) asked if I was indeed a relative of Nanny Krombach, said she would gladly share the information she found about Nanny so far and asked if I had any information of my own, a picture maybe.

Little did she know... this would be her lucky day.

I recruited my accomplice, my dad, and we established "the investigative bureau on the matters of Nanny Krombach." We actually find researching life, more intriguing than commemorating death.

My dad began pulling out albums, letters and documents that even he didn't know he had. The documents, which kept piling up, overwhelmed him to the point that he did not know where to begin. I was called to calm him down and help initiate the process.

We are lucky to have so many documents after decades of wars and forced immigration. My dad nearly drowned in the wave of documents. Every day he sends a new detail, another translation, an additional "fantastic picture" (I had to use the word fantastic, a phrase my dad really likes). As for me, I dig into web databases and later analyze the findings with my dad. I even dare argue with him about historical assumptions which annoys him of course, he is after all, a historian.

Karin, the woman from Berlin, has access to the government's archives and has been sending us details we weren't aware of. In return, I send her pictures and pieces of information to which she replies "Wonderful, now I feel I know Nanny!" She suggested to help with the translation of the dozens of letters. My dad however won't let anything out of his eye sight. On one hand, he is stressed by the incomprehensible amount of documents, on the other, he says he can do it alone, wants to do it alone, only he can do it.

It's not the first time I'm browsing through those boxes of letters and family pictures. I know all too well the beautiful Prussian village and about Nanny's good years. I know the village that lays between two lakes, the large house, the horses and carriage. I can imagine the books in the big library, and the music played by Nanny. Perhaps it was more appropriate to lay the Stolpersteine in this place, not in Berlin, where she emigrated after things started getting worse. 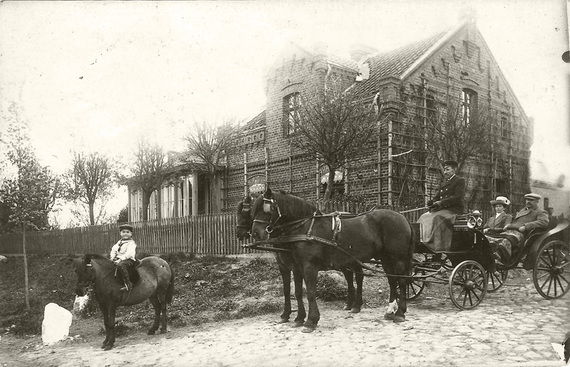 Nanny and Julius in the village in Prussia, in front of their house, Stohm, East Prussia

We knew less about the time in Berlin after her husband Julius died. After her eldest daughter also passed away leaving behind two orphans. After she realized she was not as German as she had thought.

We find a lot of information in letters no one touched for years. Reading in between the lines of the censored letters and short telegrams we are learning about what life was like in the big city, the beautiful moments, the hopes and plans, the attempts, the downfall, the wrong decisions, the despair.

We discovered that after Nanny's grandson (my dad) was born in Palestine (before Israel was founded) she came to visit twice (apparently in 1937 and in 1938!). Her daughter, Kethe (my grandmother) begged her not to go back to Germany.

But she had two other grandchildren, orphans, still in Germany, and there was no one else to care for them. She had to go back to Nazi Berlin. 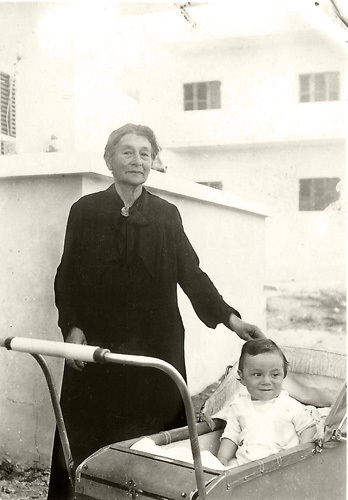 Nanny and grandson Danny in Palestine, 1937

My father and I, look at bits of details, analyze every slice of information to its finest. Here, for example, is one letter that arrived four weeks after the orphans left on a boat to Palestine, in May of 1939(!!).

"It is almost impossible to believe that the day after tomorrow will be four weeks since you left. We were very happy to hear from you so quickly. Grandma (Nanny) delves happily into your letter, so indulge her with additional letters, as many as you can send.

I hope your furniture transport will succeed after all. I was forced to have an unpleasant conversation about this matter with one of the workers in the foreign currency department. I fought him like a lion, but so far unsuccessfully... we'll see if your guardian, Dr. Felis, can arrange the transfer. If he fails, Grandma Nanny will have to try to bring with her (to Palestine) some of your possessions. We bought you a new sewing machine, but we must have a purchase permit to complete the purchase. Keep your fingers crossed, so at least that will work out."

You may say: "Such an ordinary letter." Don't you see a whole world unfolding in between the lines? A Half a year after Kristallnacht (Chrystal Night), several months before the second world war broke out, Georg (the writer of the letter) and Nanny were running back and forth between Nazi officials in an attempt to send the orphans' furniture to Palestine. They bought a sewing machine to add to the transport and they fight bureaucracy for furniture. We learn about Nanny's plans to immigrate to Palestine. Just a matter of persuading a few more clerks and this matter will be taken care of. But first things first, let's tend to the furniture...

The letter was written by Georg Zacharias, Nanny's nephew. The Zacharias are our greatest find in this search. The key was a shred of memory my dad had. In a slow process, between lines of letters and archival information, the Zacharias are revealed as close relatives, two brothers and two sisters, with whom Nanny lived her final years, and shared the role of caring for the orphans. They also share the same fate. This is an important revelation for Karin of Berlin as well, because the Zacharias are also in the list of the Stolpersteine project. The project team in Berlin found almost nothing about them and no descendants to talk to.Their letters kept by my family might be the only legacy that the Zacharias left in this world. 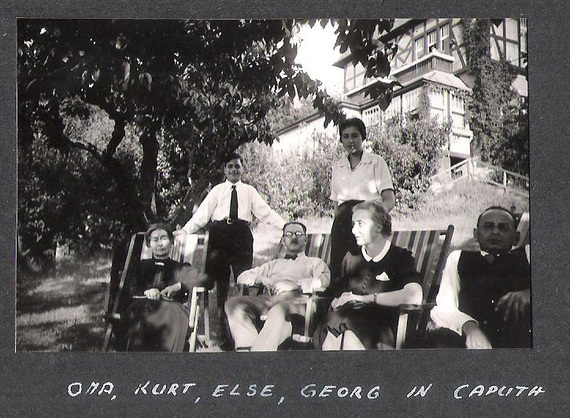 Nanny and the Zacharias celebrating a Bar Mitzvah for grandson Zvi, behind with his sister Ruth, at the youth village in Kapot, near Berlin 1.6.1938

The furniture made it to Palestine. Nanny didn't.

The only survivor of the group was one of the Zacharias brothers, Kurt. He escaped to Paris in the beginning of 1939. We know nothing of his whereabouts during the occupation. After the war he returned to Germany (in an amazing letter he apologized about the return). We know his son's family lived in France after the war.

A Stolpersteine laying ceremony will be held on June 22, Pariser 11 Str, Berlin, to honor the 82 Jews who lived in that one neighborhood in Berlin.

I wish many guests will arrive on June 22th to Wilmersdorf, Berlin, to respect the people who left nothing in this world, not even a grave. I hope they will also come for Nanny, an ordinary woman who loved music, missed her grandchildren and was willing to fight bureaucracy for them so they can have a sewing machine. 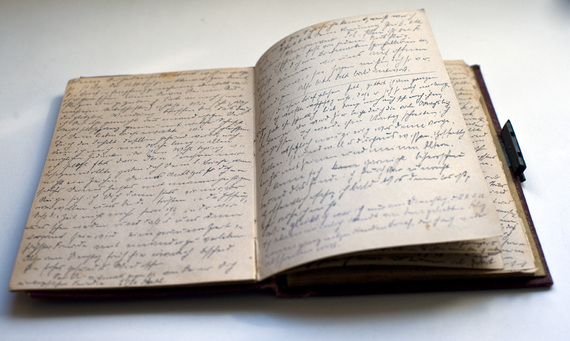 Nanny's Diary. The first "post" is from 1912. We weren't able to decipher it yet