The spiral is considered by mathematicians to be one of nature's most beautiful shapes. It comes up again and again, from the vast swirling arms of the Milky Way galaxy to the intricate nautilus shell.

Taking a page out of nature's book, physicists have now created what they're calling the world's tiniest spirals. Each one is just under half a micron -- about six million times smaller than a dime.

Hard to fake. These remarkable "nano-spirals" exhibit some pretty strange optical properties that make them nearly impossible to counterfeit. The researchers believe that they might be used to ensure the authenticity of important documents and products, and help prevent identity theft.

“If nano-spirals were embedded in a credit card or identification card, they could be detected by a device comparable to a barcode reader," Dr. Richard Haglund, a physics professor at Vanderbilt University in Nashville, Tenn. and one of the researchers responsible for the fabrication of the nano-spirals, said in a written statement.

The spirals join a growing roster of inventions developed recently to stump counterfeiters, including "invisible" fluorescent inks, webs of nanowires, and arrays of nanopillars.

Scratching the surface. To make the mini-spirals, Haglund and his colleagues used electron-beam lithography -- the same process used to make patterns on silicon computer chips. The scientists used a beam of electrons to scratch a pattern of spirals onto a plastic-coated slide and then deposited gold into this pattern before removing the remaining plastic.

"You can imagine that at these dimensions, it is a virtuoso piece of work to get rid of only the plastic, leaving the incredibly thin arms of the spiral untouched," Haglund told The Huffington Post in an email.

The researchers say this technique can be used with other metals, like silver and platinum, and on a variety of paper and plastic surfaces.

Strange properties. The nano-spirals' strange optical properties showed up when the researchers hit them with high-intensity pulses of laser light. Infrared laser light caused them to emit blue light at double the frequency. They emitted blue light in varying amounts when struck by polarized light from different angles.

These properties make the spirals easy to customize, and detect -- but hard for counterfeiters to reproduce. 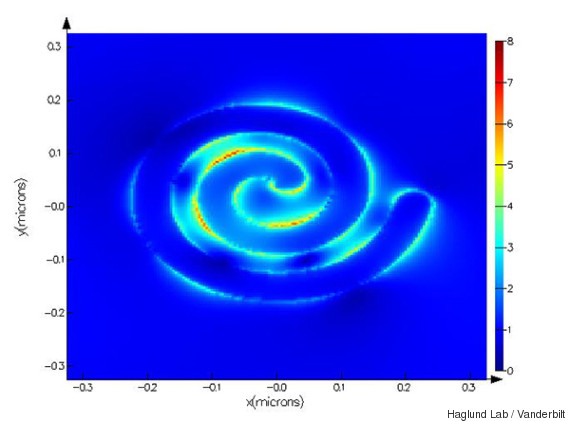 Computer simulation of light emissions produced by a nano-spiral when illuminated by infrared light.

The research was published online on May 21 in the Journal of Nanophotonics.