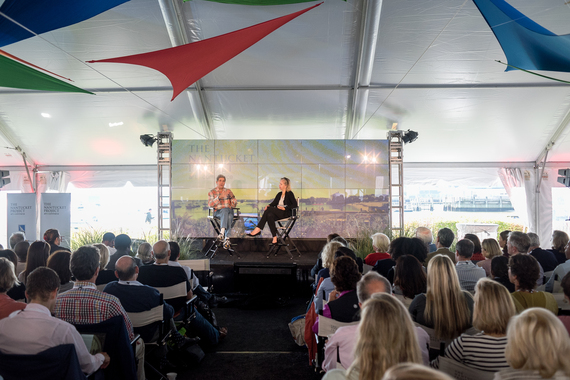 Sometime around noon on Friday, I squeezed into a packed Jet Blue flight from JFK with 99 other passengers, most of whom were attending The Nantucket Project (TNP). TNP bills itself as the only event of its kind -- an intersection of art and commerce that gathers leaders and innovators from a wide range of fields.

I befriended a small group in the first four seats and we engaged one another for the duration of the quick flight. I learned some new things about creating energy from waste as well as producing and trading other forms of it from my fellow travelers who were in that business.

I shared a ride from the airport with another passenger and we discussed ISIS, Obama and Uber taxis on the short trip to the White Elephant Hotel, and while words like synergy and networking usually make my bile rise, I must say it was nice to make new acquaintances with people from different countries and professions so quickly. I arrived on time for lunch and after some curried chicken I saw presenters that included Larry Summers and Shane Battier - and the mix of personalities and professions alone made the afternoon worthwhile.

The first thing Saturday morning John Kerry popped in as a surprise guest for an interview with Nancy Gibbs from Time Magazine, and as promised, TNP offered a wide range of other speakers as well. Chris Matthews discussed his upcoming book, which will cover the year 1939 and his lecture included everything about that year from Hitler to John Ford westerns. Entertaining is not a word I would normally use in the same sentence with Matthews, but his talk was just that. However, rather than go the standard celebrity interview route, I decided to take advantage of the breaks between presentations to chat with other attendees, and I was fortunate enough to meet Alex Debelov, a young man who came to this country from Russia at age 13 with the intention of becoming an entrepreneur. After graduating from Babson College, Debelov drove to Silicon Valley, where he immediately met Apple co-founder Steve Wozniak in a hotel lobby. The two became fast friends after playing Segue polo together (there's a story), and Debelov's career was off and running. He is the founder of Virool, a content distributor with a website landing page promising to "get your video seen."

"We allow advertisers to communicate with their audiences in the most engaging way possible," explained Debelov. "We take their video content - pieces that are longer than commercials -- and place them on Facebook, Twitter, Pinterest and other websites. The goal of the 15 and 30 second television commercial is to get people's attention. What we do on the web is very different, because people that watch our videos share them with friends and then actually talk about it afterwards. More than commercials we are selling short stories and vignettes." Debelov has studied consumer behavior and how people spend their time, which entails watching less television and engaging more on Facebook, Twitter and other internet sites.

Different viewing habits require alternative content and Debelov has delivered his brands to more than 92,000 sites and clearly, companies like his are integral to the future of advertising and brand recognition. Unlike with a standard television commercial, Debelov uses a CPV (Cost Per View) system and is able to determine not just how much time someone spent watching a video, but how deeply engaged they were. "We use a system of eye tracking with our viewers webcams (and their permission) that can tell us not only how they watch a video, but whether they're happy or sad, plus their other emotional responses to the piece," said Debelov.
At most conferences, attendees are all from the same industry, but TNP is a melting pot of professions. After chatting with Debelov, I shared a lunch table with Naveen Jain of Immunity Project who is seeking a cure for Aids, producer Patrick Milling-Smith (Zero Dark Thirty) and psychiatrist Ronald Dozoretz of Genomind, who was very engaging but unfortunately had no quick cures for my numerous phobias. In the background as we ate, poet Billy Collins talked about children playing the swimming game, Marco Polo. He wondered how many of them actually had any inkling as to who and what Marco Polo was and made a joke about dunking the ones who didn't know. I wish I'd had the time to meet Collins as well as many of the other TNP participants. I had dinner with filmmaker Louie Schwartzberg who was also a presenter and found his work extremely impressive and recommend it highly, particularly his spectacular Imax films. I finally got to meet Jim McCann, founder of 1-800 flowers.com which has helped me apologize many times over the years with a very high success rate.

Of one thing I'm absolutely certain, this will not be the last time we hear about Alex Debelov, who is creating real impact on the internet. 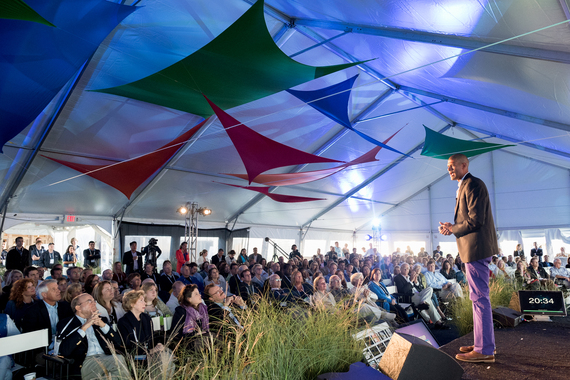