Naomi Campbell's modeling career has definitely stood the test of time, but sadly we can't say the same about her hair.

All those years of wearing hair extensions and weaves have really caught up with the British bombshell, who was spotted in Ibiza by paparazzi this week showing off a massively receding hairline and mangled mane.

We've seen bald spots on the British beauty before, but this is way bigger than a spot.

In the past Naomi has done a pretty good job covering up the patches and jagged edges with her classic bone straight weave and blunt bangs. But this week the bikini clad model was spotted splashing around in the ocean with her Russian billionaire beau Vladislav Doronin, which isn't conducive to keeping her hair in place--thus exposing her shocking hair loss to the prying photogs.

Many believe the 42-year-old model is suffering from traction alopecia, a hair loss condition that is often caused by wearing weaves and extensions over an extended period of time.

"It's surprising to see Naomi like this--but we see this all the time," Mitchell told The Huffington Post. In fact, several celebs including Serena Williams, Britney Spears and Kim Kardashian are rumored to have suffered from the condition as well.

Naomi's case seems pretty severe. "At this stage it's probably permanent and irreversible," said Mitchell after studying the picture of Naomi with her tattered edges. "It looks like she waited too long to treat the issue and that her follicles are now totally damaged."

If Naomi has any chance of saving what's left of her hair, Mitchell says she should probably lose the weave that's currently attached to her natural hair. That'll prevent further breakage, she said. Mitchell suggests that the supermodel invest in a fitted custom wig, which will alleviate the strain on her remaining hair and completely cover her bald patches.

Naomi has a bit of time to pull herself together before she makes her reality TV debut on "The Face." And with an estimated net worth of $48 million, she can certainly afford the best wigs that money can buy.

Here's a look at Naomi's shocking hair loss--and check out the fashion icon on her better hair days in the slideshow below. 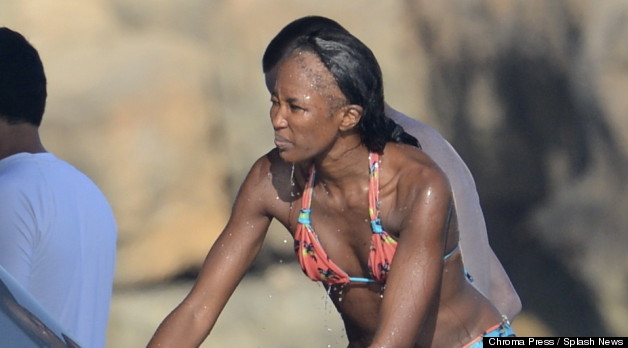