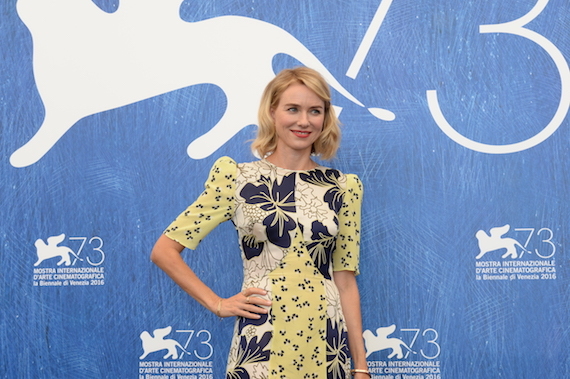 In a recent poll to find the 100 best films of the 21st Century so far, David Lynch's Mulholland Drive (2001) was voted number 1. While I was among the 177 critics and film aficionados who participated in the poll, I did not personally vote for the film. Not because I didn't love the film as much as everyone else did, but because I had a few more women filmmakers on my list.

In fact, on a list that included less than ten women filmmakers, I felt that at times, the actual roles played by women in the films voted were absolutely instrumental to each film's success.

And it is with Mulholland Drive that I'll continue this thread, since I'm on the subject. Because I believe that the success of that film is due, in extraordinary part to its wondrous actress Naomi Watts. She has, quite easily with her soft ways and edgy sophisticated style, become one of my top, all-around, favorite actresses of this century.

In Philippe Falardeau's The Bleeder, which premiered at the Venice International Film Festival, before moving on to Toronto, Watts continues to awe. Even in a role that sees her on the big screen for about 15 minutes total of a two hour film, she's wonderfully complex. I yearned to see more scenes between her Linda and Chuck Wepner -- played by Watts' real life love Liev Schreiber. Together they sizzled, but in a way that is impossible to describe. One that has to be experienced in person, as part of an audience, in the magical darkness of the movies.

During her time in Venice, Watts looked glowing and glamourous. At the press junket I attended to interview her, she wore a beautiful dark blue crepe dress with beaded, embroidered birds on each side of the neckline, by Stella McCartney. It drew compliments from seasoned male journalists, who blushed like young boys faced with Watts simple, yet fascinating beauty.

The result was an interview that drew out the pure, essential Naomi Watts, that woman few are lucky enough to experience away from her insightful interpretations of less-than-perfect women we love to watch on the big screen.

Do you get the boys' fascination with boxing?

Naomi Watts: Yes, I do. I have an older brother and he was a kick boxer for a little while when we were in Australia and I saw him fight a few times and it was really hard to watch. I really wanted to jump in the ring and pull the guy off him. Or start punching the other guy, the opponent. It's really upsetting when you see someone you love get hurt! Or even just hit.

I can be passionate about it but I do get freaked out about the brutality of it, and it makes me nervous. Especially some of those [more extreme] fights that Liev watches.

How was it to watch him get beaten up, because he just told us you quite liked it...

Watts: Oh, that's his story?! I wasn't there on the set for that. That was shot in Bulgaria. I was impressed by the fight when I saw it visually. I've gone to many fights with Liev, he's always had this burning passion for boxing and so does my brother, they often watch them together. I get into the sport because I learn things about the person, the story. Like I love seeing Manny Pacquiao fight because his mom is in the front row, throwing the eye. That helps me stay with it. I need a back story.

In general sport has something in common with cinema; there is narration, suspense...

Watts: And battles. We don't take physical punches but we do take emotional ones. And rejection happens a lot particularly in your early days, when you're trying to get started. I took some punches, metaphorically speaking.

Were you excited that Mulholland Drive was voted "Best Film of the 21st Century", in a recent poll?

Watts: I was moved by that. I'm really proud to be in this film and it was such a life changing experience in every way and continues to be the thing people relate me to. It was one of the greatest role one can imagine, playing these two characters within this one role. Some people don't get that luxury in their whole career, much less one film. And that it was shared with someone who was my mentor and dear dear friend. I sent him a message and told him, I'm so proud. I love my friend David Lynch and have many great experiences with him.

Who were you back then and who are you now?

Watts: Hopefully I'm still the same, I'm very grateful, and back then I was grateful to be in that film but I was struggling to prove myself. Now I've had the luxury of people trusting me, just based on that film, what a lucky showcase for other filmmaker to see. I don't think I've auditioned for anything since then, people have just literally offered me films, and I was running around town like a lot of other actors who are trying to get started, just doing countless auditions. Sitting and waiting for hours, barely getting eye contact with people. It was a struggle but I haven't lost touch with that, which allows me to really feel the gratitude. Success came to me later, as opposed to getting started in your early twenties. I wish I had more time back then to work with people and in some ways it all makes sense. Maybe I would have been too impressionable and sent on the wrong path... Kind of like Chuck. I'm a very gullible person, people always tell me that.

You are still gullible?

Watts: Yes. Is that bad? It's better than the opposite. People will tell me a story and I'll go, "oh really? That's so great!" And they'll say, "I'm just joking." I just believe whatever someone wants me to believe. I'm more suspicious these days but I'm not jaded.

Do you think you could still be an actress if you were more jaded?

Watts: I think it would make the work harder for yourself. You have to be open to all kinds of ideas, you don't want to limit yourself. 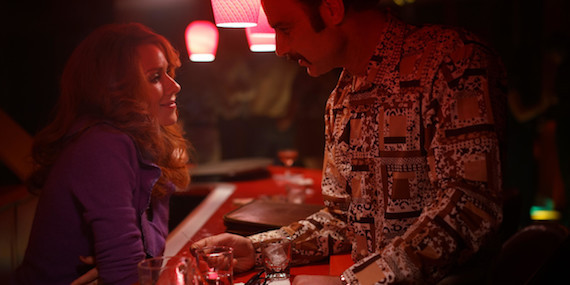 In The Bleeder, you play such a broad character, so different from how we've seen you before. What was it like to play Linda?

Watts: It was fun. I fell in love with Linda after meeting her and the relationship they have is so beautiful. They are like 30 years plus together and they just have so much joy and fun together and she's kind of this outrageous character. She'll sit there and tell politically incorrect jokes, she'll tease Chuck in front of everyone and he takes it on the chin. I've got recordings of her, interviewing her because I wanted to start with how her voice sounds and in doing that I asked her questions about her life and how she met Chuck and she's just got this wonderful spirit and it's very infectious. When Liev first got this material, I read the script and I, like him had the same reaction that it would be an amazing thing to be involved with. And once I met Linda I thought, this is the role I want to play, because she's got all this wisdom, as well as the fun and the outrageousness and the, you know, the way she dresses and holds herself. She's big but she'd got this pure heart of gold, like him, and she kind of brings it out of him. It's not like she's changing him, she's just helping him get in touch with the best version of himself.

Did you ever think that you would play his first wife, instead of Linda?

Watts: We did talk about it and I sort of felt like I'd done things like that before, a few times. I liked the fact that Linda has this way of getting through to him. Even though it's less screen time, she finally taps into "you've gotta grow up." And at this later point in their lives he's more open to it and finally ready to listen. She says "those people they don't love you. There's real people in your life, listen to them" and finally he listens. He's hit his bottom and it's finally time to wake up. And she's there with him. 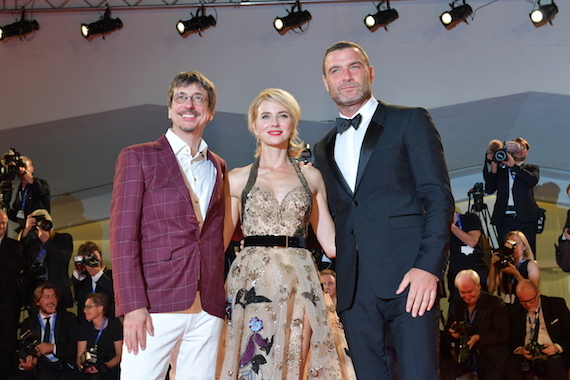 Is it difficult to recreate that intimacy with your real-life partner?

Watts: It's definitely different. But I like that challenge. You are a little bit more nervous in a way because that person knows you so well and so it's hard to hide things. You've really got to be on your game and in your most truthful place. And I'm working with an accent, a certain way of moving, it was definitely hard and on the first day or two. I wish we'd had more time on the set together because we'd have completely relaxed into it. I think fifty percent of the time, I was quite nervous.

Is this the life you imagined for yourself, when you first started out in the business?

Watts: Who would have thought! I had no idea, of course you hope to be able to work with people you admire, I had no idea that it would go so well and sustained. I've been very lucky, I feel very fortunate.

The dangers of fame -- what do you think of that sentence?

Watts: It's illustrated so perfectly in the film. Chuck he goes on this path of self-destruction because he's not prepared for it. There is really no preparation for it. And that's why I say that I'm grateful things came to me later, I was more able to deal with it. Perhaps I would have made bad choices if things had been handed to me on a silver platter in my early 20s. I was offered loads of movies that were blockbuster-y pay checks and I could have gone that way... Not to say that I'm against those! But if you're not going to connect to the material and you're purely doing it for money, it's going to come through.

In While We're Young, you got to do comedy and be quite funny. Would you want to do more of that genre of films?

Watts: I've just finished a film called The Glass Castle which is an adaptation of a memoirs. It's by no means a funny film, it's a story where a lot of upsetting things go on but I play a character who is sort of the comic relief, I suppose. She's the lighter one. It's just harder to find good comedy roles, especially at my age. You kind of have to be cute and girlie for those classic rom-coms.

When did your children realize you don't have a regular job?

Watts: Yeah, they figured that out early. They were in Thailand with us when I was doing The Impossible.They didn't know what it was, and I was really afraid of them coming to the set because I was covered in wounds. So I had them come in with me one day and help put the chocolate powder all over me, paint me with blood. Because it's not blood is it? And mommy is talking, moving in the same normal way so then they understand it a little bit better. But it's still weird. They understand we're actors. After the last film I did, where there were lots of children on set, they came away from it saying "we want to be actors!"

The Bleeder was just acquired in Toronto for distribution by IFC Films and Showtime, in a groundbreaking joint deal.