It's beginning to look a lot like the holidays -- if not in real life, then certainly on Pinterest, where we've been stockpiling both inspiration and intentions of actually pulling off a fabulous holiday table once and for all.

Alas, Pinterest projects aren't always what they seem, landing more often than not between absurdly aspirational and destined for failure. But we've found an equalizer, of sorts: 5 napkin folding ideas far easier to make than they look. We know, because we tried them...

Fold the bottom half of your napkin up, leaving about an inch and a half of space at the top.

Fold the bottom half of your napkin up, leaving about an inch and a half of space at the top.

Take an inch of fabric from the left end and fold it over. Now fold it back again, accordion style. Continue to fold the napkin back and forth until you’ve reached the end.

Fan out the edges of the napkin. Slide a napkin ring over one end to hold the shape together.

Add a pine cone and a place card to complete your Thanksgiving Turkey napkin fold! 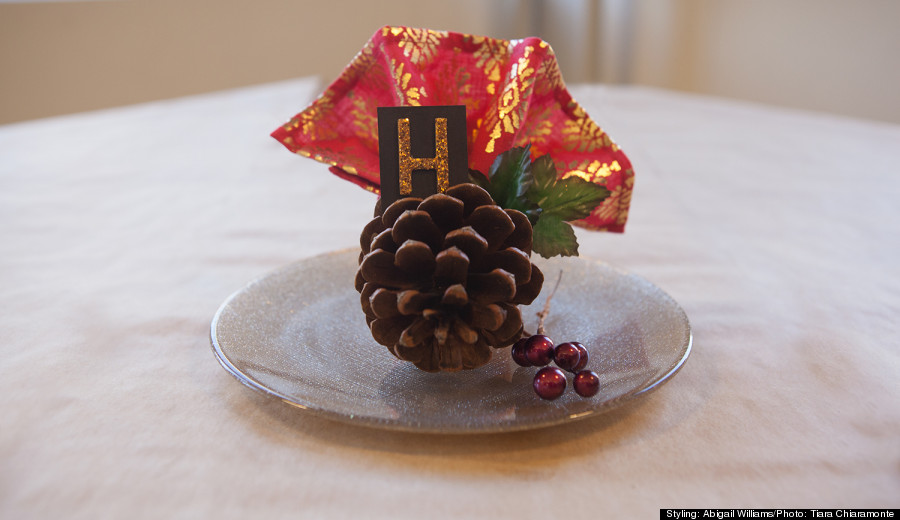 Get The Look: Linen Glitter salad plate in Champagne, $8.95, pier1.com; Arbor Floret cocktail napkin, $28 for set of 4; anthropologie.com
(H/T: Smarty Had A Party)

Lay the napkin out flat. Fold two opposite corners in to meet in the middle.

Fold the napkin in half from the bottom up.

Fold the napkin in half again from the top down.

Fold the sides of the napkin inward - they should slightly overlap in the center.

Slide a ribbon beneath the napkin and cinch it in the middle. 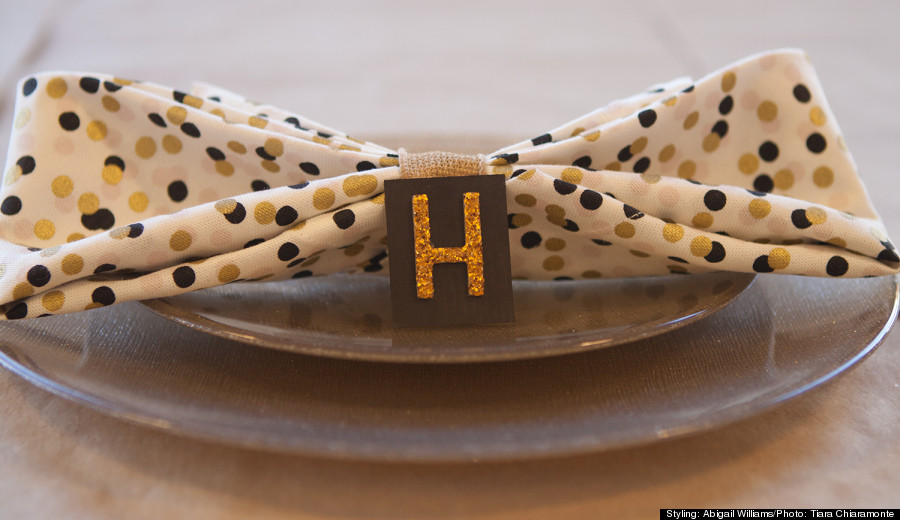 Fold your napkin into a square. Now fold the top right corner of your napkin down diagonally.

Fold under about an inch of the right side of your napkin. (Use a hot iron to hold the fold in place.)

Fold under the left side of your napkin.

Slide flatware into each pocket. 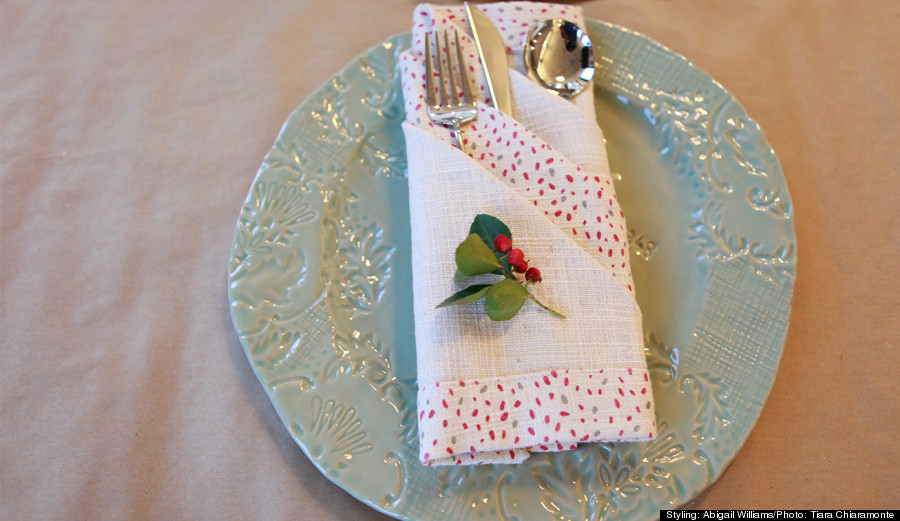 The Men's Shirt
Difficulty Level: Somewhere in the middle.

Fold the corners of your napkin inward to create a square shape.

Fold the right and left sides of your napkin over until they meet in the middle.

Fold under the top two inches of your napkin.

Fold the top right corner down to the center. You should begin to see your collar taking shape. Do the same with the top left corner.

Pull the bottom right corner out to the side. Repeat with the bottom left corner. These corners will serve as your sleeves.

Fold the bottom of the napkin up and tuck it beneath your collar. 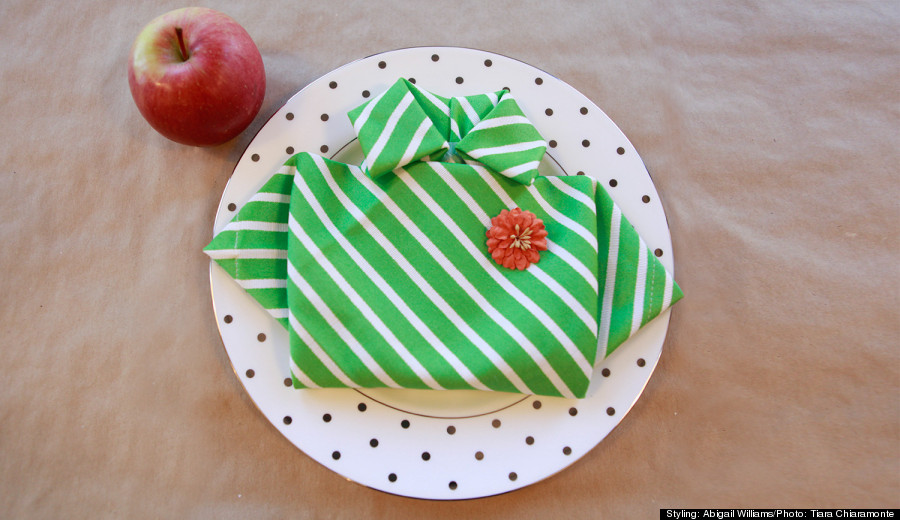 Fold your napkin into thirds.

Find the napkin’s middle. Take upper right hand corner and fold it down to create a triangle.

Do the same with the upper left hand corner. Your napkin should have a tent shape at this point.

Flip the napkin over. Then roll up the end flaps on the right and lefthand sides. 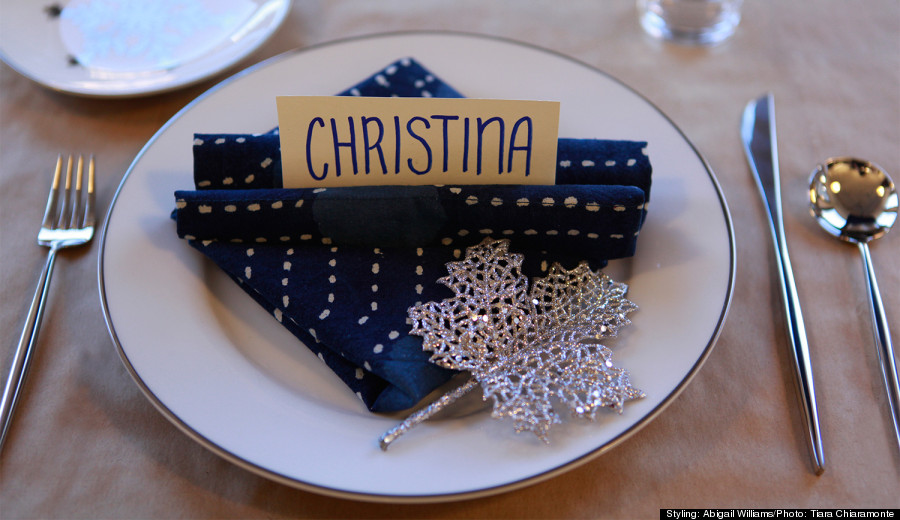 Now that you've got your folding skills down pat, check out our guide to keeping your linens nice and clean.