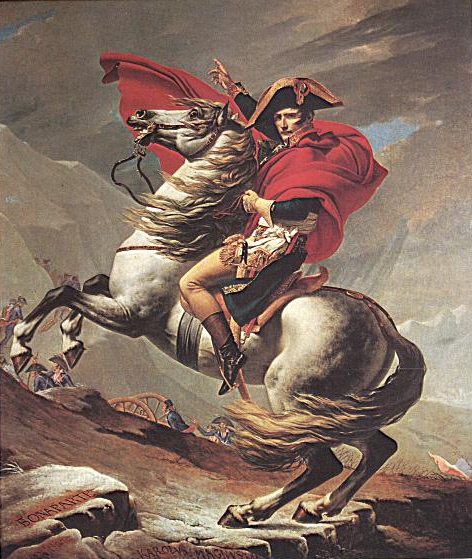 Before there was UBER or Airbnb there was Napoleon.

He figured out how to use social media before there was social media, and once he had figured it out, he came within a hair's breadth of conquering the world.

The problem with new technology is that it always gets plugged into old ways of working, it rarely, at least at first, is allowed to become what it wants to become.

Suddenly (quite suddenly) with the arrival of both the Internet and smart phones that allow anyone and everyone to make video and share it for free, we are faced with an entirely new world -- and I mean entirely.

But how are people using these unique tools?

Why, they are taking them and plugging them into old ways of working. The architecture remains pretty much unchallenged.

What do I mean by that?

I mean that in the news business, for example, reporters are now waking up to the idea that they could -- could -- shoot their own stories on their iPhones instead of working with a cameraman and a crew.

This is supposed to be 'revolutionary'?

There are others, (not in the news business) who are waking up to the idea that perhaps, perhaps, social media might, might, be a tool to promote their products. So some companies, largely in the cosmetics and fashion business, are paying 'Social Influencers' to promote their stuff online through Instagram and Youtube.

This is also nuts.

Or rather using perhaps 1 percent of the potential that is out there, that has yet to be tapped into.

Let's get back to Napoleon.

How was it possible that Napoleon was able to take France, a country wracked by the Revolution and essentially a mess, and turn create an Empire that had not been seen since the days of the Romans, and in only a few years?

Well, that he was a military genius goes without saying, but, he also did something else.

He conscripted the peasantry into his army.

It wasn't called the Grande Armee for nothing.

It was huge (or Yuuge, but let's not go there).

More than half a million peasants given simple training in marching and fighting.

Now, the rest of the European powers had 'professional' armies -- well trained, dressed in bright colors, and small. But professional

On the field of battle, Napoleon beat the crap out of them. They never saw what was coming. And, had it not been for a rather unfortunate Russian winter, Vladimir Putin would be Valerie Putain.

But that is another story.

Back to social media.

Companies are crazy to put their brands in the uncontrolled hands of 'social influencers', whomever they are -- and who are they, anyway?

Unleash the power that you have.

Flood the blogosphere every day, every hour, every minute with YOUR content.

It should be part of the job.

The problem here is not techical. The technology exists. The probem is psychological.

We 'think' of content, of video, of advertising as someting complex, hard to do, hard to make, something that only 'they' can do.

You know, the 'important' people.

If you don't do it, someone else will.

(And I will be more than happy to train them).