"Merchant of death," Milosevic, Hitler, fascist, murderer, Bhasmasura. If you can name an insult, it has been hurled at Gujarat Chief Minister Narendra Modi. With Modi's prime ministerial candidature in 2014 virtually assured, the viciousness of the Indian political discourse has only been amplified. In the "conventional wisdom," Modi has been painted as an unyielding, majoritarian conservative that would disfigure India's vibrant democracy into intolerant fascism. Although several arguments are typically advanced to support this bold claim, the reality is far more nuanced. 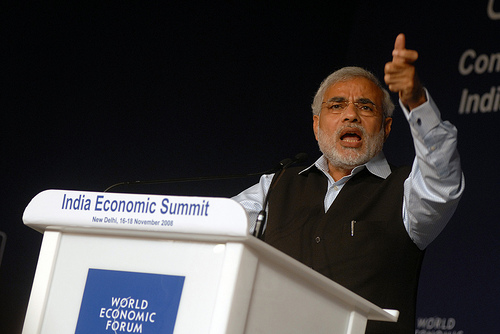 Under Narendra Modi's leadership, Gujarat has achieved impressive economic growth, increasing its annual GDP growth rate from 2.8 percent (1996-01) to 10.3 percent (2002-12), according to The Economic Times. But have the benefits of economic prosperity reached the most vulnerable or have they accrued only to the wealthy? Modi's critics suggest the latter, insisting that Gujarat is "rife with inequalities," and that the state's growth has not been "socially inclusive." As a liberal who holds economists like Keynes, Krugman, and especially Galbraith in high esteem, I consider these charges to be very serious.

Yet, there are inexplicable gaps in this argument. The Gini coefficient has long been considered the most telling indicator of income inequality since it considers the distribution of wealth across all strata. According to a 2007 UN Report, Gujarat's Gini coefficient was 25.5, significantly lower than India's average of 29.7 and ranking third among its major states, actually indicating relative income equality. And the Reserve Bank of India (RBI)'s figures for 1999-00 indicate that Gujarat's Gini coefficient has actually decreased marginally during Modi's tenure. Modi's opponents often turn to Nobel laureate Amartya Sen's human development index (HDI) as a more telling indicator of social well-being. While these numbers may not initially be very flattering for Modi's government, when adjusted for income inequality (IHDI), Gujarat emerges ranked seventh among nineteen major Indian states (UN, 2011).

Moreover, Gujarat spends a greater proportion of its budget in social sector human development (69.9 percent) than do other Indian states (66.4 percent) (Economic Times). On the environmental front, while Gujarat overtook Maharashtra as the state with the greatest number of factories, particulate air pollution in Gujarat's industrial hub, Ahmedabad, actually decreased. Gujarat became the first state to achieve 100 percent electrification (Census of India, 2011), with significant outlays given to solar energy investment. And I ironically learned of Gujarat's "solar canal initiative," which simultaneously produces clean energy and protects scarce water resources for irrigation, on Facebook's 'Being Liberal' fan page. Taking these factors into account, CSLA proclaimed that Gujarat's development was "the most sustainable" of any Indian state.

Of course, this doesn't mean Modi is the Keynesian champion, either. Given Modi's admirable belief that "education is one of the most powerful drivers for bringing about progress and development in society," his government should increase investment in education to combat problems such as secondary level dropout (29.3 percent). Malnutrition does remain a problem, and Modi's government has been very flexible with corporate India (though this is not inherently bad). On the overwhelming balance, however, I cannot help but come to the conclusion that Modi's critics are wrong about Gujarat's model of development. To me, the Gujarat story is not about laissez-faire policies but rather the attempt to build infrastructure and improve state capacity, which are ultimately the best indicators of social progress in developing nations (See Pillars of Prosperity, Princeton Univ. Press).

Phrases like "divisive" and "polarizing" are regularly used to describe Narendra Modi, typically portrayed as an extremist Hindu leader with no care for the 9 percent Gujarati Muslim minority. Last month, India's media went berserk over his remark, "I am a Hindu nationalist," which lent currency to this largely false narrative. In an interview with Reuters, when asked whether he was a "Hindu nationalist," Modi said, "I am a nationalist, I am patriotic, nothing is wrong... and I am a born Hindu... so, yes, you can say, that I am a Hindu nationalist." Here, Modi is actually drawing a clear distinction between his religion and his patriotism, not conflating the two, thus stripping "Hindu nationalist" of its divisive connotations.

Unlike India's many caste-based leaders like Mulayam Singh Yadav or Mayawati in Uttar Pradesh, Narendra Modi has never used his status as the member of a "backward caste" to garner votes. A recent study by an IIT-Delhi professor of all of Modi's public speeches in the period 2010-13 surprisingly revealed that the BJP leader does not make religious appeals, either, instead focusing on issues of economic development that affect all communities. Modi's politics has been aimed socially at cornering the opposition Indian National Congress on its alleged "vote bank politics," exemplified by its refusal to enforce the Uniform Civil Code (the Indian equivalent of the Fourteenth Amendment) or the Shah Bano court verdict.

Finally, his critics turn to the opposition Modi faces within his own party, the BJP, as a symbol of how "divisive" he is. But the reality is that opposition to Modi has to do with his own party's misguided attempts to keep leadership and power concentrated within a small coterie of Delhi leaders, not his policies.

This argument is made in the backdrop of the 2002 post-Godhra riots, in which over a thousand Muslims and many Hindus were mercilessly butchered. The Modi administration ultimately failed to control the violence, but the question mark that has long hovered over this riot has been whether or not Modi's administration was itself involved in instigating the violence and/or turning a "blind eye." In its 500-page report, a Supreme Court-monitored Special Investigation Team (SIT), delcared in 2011 that "there is no prosecutable evidence against Narendra Modi," giving him a "clean chit." Although the 2002 riots are indeed a gruesome incident in India's history, the topic has been argued ad infinitum over the last eleven years and tomes have been written on the subject so I will not dwell upon it too long.

Instead, it is perhaps more instructive to look at the actions of the Modi government as it regards minorities themselves. Zafar Sareshwala, a former critic of Modi and a prominent Muslim businessman, has repeatedly claimed that Modi's government has been more responsive to the concerns of the Muslim community -- education, renovation of Islamic buildings, etc. -- than previous administrations. The Sachar Committee, which did an intensive study of the socioeconomic condition of Muslims throughout India, discovered that Gujarat had a good track record vis-à-vis its largest minority community. For example, the Muslim literacy rate (73.5 percent) was very close to the state average, something not true for most Indian states. Contrary to the accusation that the government does not involve Muslims in public life, Modi's administration has employed the minority community in numbers commensurate to its population in government jobs (8.5 - 9.9 percent). Moreover, the report indicates that these figures have generally improved since the BJP was in power in Gujarat starting in the eighties.

In the 2012 State election, 31 percent of Gujarat's Muslims voted for Narendra Modi. This might not seem like much, but given India's fractured multi-multi-multi-party democracy and the fact that only 4 percent of Muslims voted for the BJP nationally in 2009, it is safe to say that Modi has succeeded in garnering support within the minority community. Gujarat's slogan has long been Sabka Saath, Sabka Vikaas (Everyone's Support, Everyone's Progress). And although Gujarat's track record as concerns its minorities isn't perfect, the comparison to Hitlerian Germany is absurd.

Why Does It Matter?

If you're reading this in India, the answer to this question seems obvious enough. But for those of us in the U.S., why should we give a hoot? Well, more likely than not, Narendra Modi will emerge the Prime Minister of India when the votes are counted in May 2014. Despite firsthand knowledge of India's many infrastructural and political deficiencies, it cannot be denied that India will occupy an increasingly important spot in American foreign policy as a nascent power. If it turns out that our country needs to work with Narendra Modi on issues that affect the relationship between the two largest democracies in the world, it is important that we enter such a relationship without the ethical qualms associated with working with an ultra-conservative, religious fascist -- one thing Modi certainly is not.