Narrative Magazine: Most people travel to the grand cities of Europe to see the sights: the ruins, the cathedrals, the art museums. But on a trip to Barcelona artist Theodora Shure was most entranced by the graffiti, by their mystery and accessibility. These fascinating snapshots of street art were inspired by a 2007 visit, during which the artist ran through the narrow streets, eager to see what awaited her just around the next corner.

IN 2007, when I visited Barcelona, I was already interested in stenciled art. I’d learned to make stencils in a free workshop open to teens in Seattle, and I loved that the materials were everyday ones, such as construction paper and an exacto knife, and that the possibilities were open-ended. In Seattle I kept an eye out for graffiti, and I pored over art magazines such as Juxtapoz, which sometimes highlights street artists. I visited photo websites such as Wooster Collective and Streetsy. I was hooked.

Barcelona is known to have some of the most interesting and abundant graffiti in the world. While I was there, I would run back and forth through the narrow streets and alleys hoping to find something plastered on the next wall, the next corner. I would go on and on, because if I stopped there would be no way of knowing if I had been just a few steps short of seeing something spectacular. I kept turning corners to be sure. Sometimes I would end up at a blank, untouched dead-end that shouted PAINT ON ME, but more often than not I’d find something intriguing to photograph. A few times I dragged a family member along on a wild-goose chase, and we would be lost, and then we’d see a painting that stopped us in our tracks. The excitement of those moments made me want more.

Part of the attraction of street art is the factor of chance. Did other people walk by the spot and look at the picture with the same admiration? Did they see it as vandalism, or did they walk by it without ever noticing it? Was there a story behind the artwork? Did the artist have to sneak around in the middle of the night to paint it or paste it up?

All over the city I followed various artists by the tags on their work. A favorite work I saw all over town was a set of doilies with little individual collages and drawings in the center. They seemed to be stuck up everywhere. How long did it take the artist to make all those doilies? And what thoughts were behind the work?

The mystery, anonymity, temporary nature, and accessibility of street art make it thrillingly rich. The photos I took in Barcelona were a way to preserve the experience of everything I saw there. 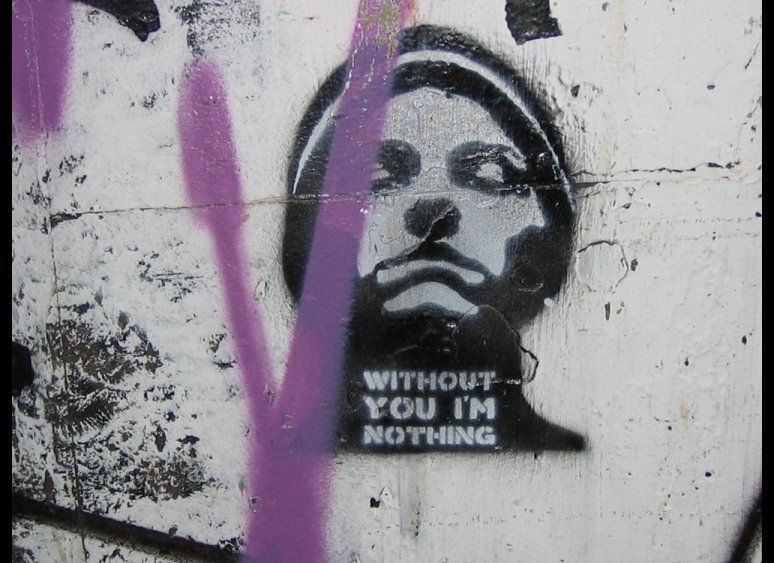