The rover that NASA is sending to Mars in 2020 will carry seven instruments geared to choosing just the right rocks to collect and store for future return to Earth. They include several firsts for Mars, including a zoomable camera, a machine to generate oxygen from carbon dioxide, and radar to explore geology up to half a kilometer deep. 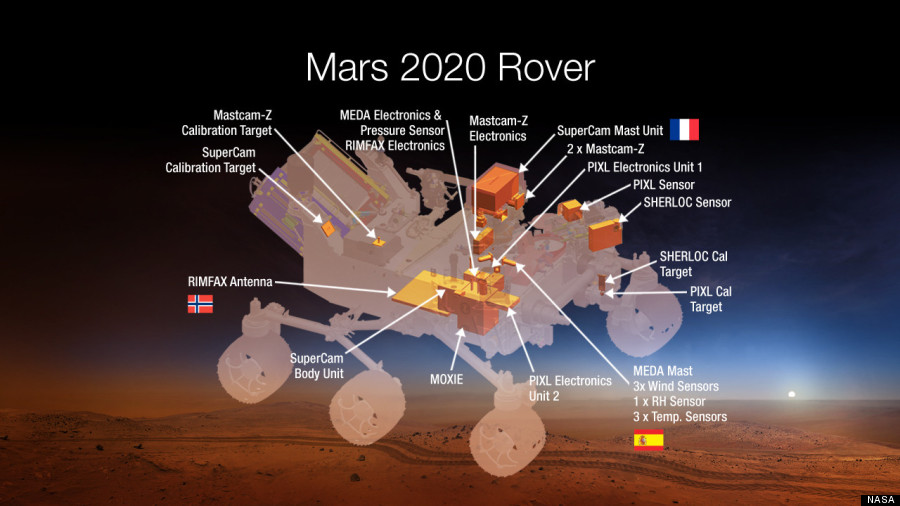 The instruments, announced 31 July from a pool of 58 competitors, are in some ways a very different collection than what the Curiosity rover is currently trundling around Mars with. Curiosity does most of its chemistry on its back, by scooping up samples of soil or rock and dumping them into various instruments to analyze. The 2020 rover, which is otherwise modeled heavily on Curiosity, drops many of those analytical abilities and instead focuses on selecting samples that might be studied one day back on Earth. At 40 kilograms, the weight of its science payload will be actually less than that of Curiosity.

John Grunsfeld, NASA’s associate administrator for science, confirmed that the 2020 rover would carry a small ‘caching’ system for future sample return. Details have yet to be worked out, but it will likely collect slender, pencil-sized cylinders of rock and tuck them into a canister for future missions to retrieve. “I wouldn’t rule out the possibility that it’s a future astronaut that picks up the sample and returns it to Earth,” said Grunsfeld, in optimistic speculation given current funding for NASA. “But the most important step is to find samples that are so compelling that we need to get them back.”

NASA has yet to determine exactly where the US$1.9 billion rover will land. But it is likely to aim for a spot with a wide variety of geological features nearby. Curiosity has been plagued by landing more than 10 kilometers from its ultimate goal, a mountain named Mount Sharp, and having to drive all that way to get to it. (The rover still has several kilometers to go.) The long drive and sharper-than-expected rocks have pummeled the thin aluminum sheeting on Curiosity’s wheels, tearing huge holes; engineers are testing new designs and new materials in hopes of keeping the 2020 rover from suffering the same problem.

The 2020 rover will need to trade off the time spent driving to find samples and the time spent drilling and collecting them, says Kenneth Farley, a geologist at the California Institute of Technology in Pasadena and the mission’s project scientist.

Curiosity was originally supposed to carry a three-dimensional zoom camera on its mast, developed with filmmaker James Cameron, but NASA pulled it from the manifest. The 2020 rover tries to compensate with a zoom camera developed by planetary scientist James Bell of Arizona State University. The ability to zoom should allow the rover to move more quickly along the surface, because it can more easily scrutinize distant rocks and better calculate potential hazards before it starts moving in a particular direction, said Michael Meyer, NASA’s lead scientist for the Mars exploration program.

The oxygen-making machine comes from NASA’s human exploration side, and is a step towards demonstrating whether astronauts could generate resources they need on the Martian surface, said William Gerstenmaier, head of the agency’s human exploration program. Going by the peppy acronym MOXIE, it will aim to measure the efficiency of producing oxygen from carbon dioxide in the Martian atmosphere.

Other instruments include an X-spectrometer and an ultraviolet laser, both targeted to studying the mineralogy of rocks in high resolution, and a camera that can probe for organic compounds. “Every single instrument is either improved [from past missions] or we haven’t sent it to Mars before,” said Meyer.

Two instruments will be operated by non-US scientists. The ground-penetrating radar will be led by radar expert Svein-Erik Hamran, of the Forsvarets Forskning Institute in Norway. The meteorological package on the rover’s mast will be run by robotics engineer José Rodríguez-Manfredi of the Center for Astrobiology in Madrid, the same group that provided the weather instruments for Curiosity.